Our VERIFY researchers are fact-checking what Vice President Mike Pence and Senator Kamala Harris say during 2020's first and only vice presidential debate. 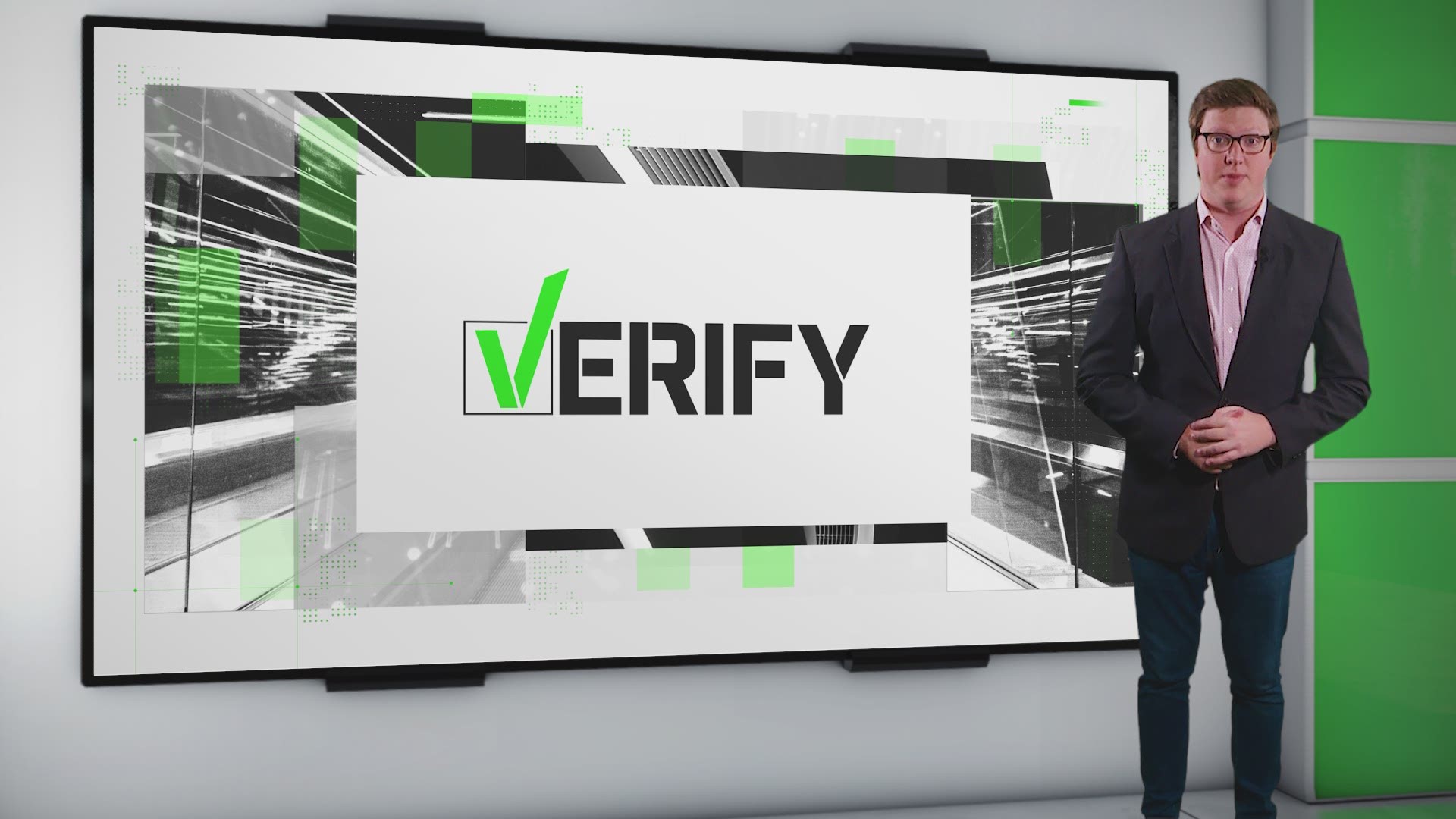 The debate unfolded as President Donald Trump recovers at the White House after testing positive last week for the coronavirus and spending several days in the hospital.

Our VERIFY researchers are working to fact-check the claims and statements both nominees made throughout the evening Refresh this story for updates.

This claim is true.

This is an accurate representation of CDC data, although the time range is not the same. According to the CDC, there were an estimated 60.8 million cases of H1N1 from April 12, 2009 to April 10, 2010.

It's important to point out that this is not the same time period since COVID-19 hasn't been around for a year yet.

This claim is false.

The Trump administration announced it would be suspending travel from China on Jan. 31. As of that day, eight people in the United States were confirmed to have COVID-19, according to Johns Hopkins University.

CLAIM: While talking about President’s Trump’s travel restrictions on China at the beginning of the COVID-19 pandemic, Pence said, “Joe Biden opposed that decision. He said it was xenophobic and hysterical.”

While Biden has taken a stance against travel bans, this claim is misleading. Pence is likely referring to a tweet Biden sent on February 1, a day after Trump announced the travel restrictions.

He said, “We are in the midst of a crisis with the coronavirus. We need to lead the way with science — not Donald Trump’s record of hysteria, xenophobia, and fear-mongering. He is the worst possible person to lead our country through a global health emergency.”

We are in the midst of a crisis with the coronavirus. We need to lead the way with science — not Donald Trump’s record of hysteria, xenophobia, and fear-mongering. He is the worst possible person to lead our country through a global health emergency.

Biden did not specifically refer to the travel ban when he tweeted about “hysteria and xenophobia." But on March 12, he tweeted against travel bans saying, “A wall will not stop the coronavirus. Banning all travel from Europe — or any other part of the world — will not stop it. This disease could impact every nation and any person on the planet — and we need a plan to combat it.”

Looking at official campaign events that directly addressed fracking in the past five months, this claim is false.

In April of this year, Joe Biden did an interview with KDKA, the CBS affiliate in Pittsburgh. The interviewer asked if he would shut down fracking.

He responded, "No, I would not shut down this industry. I know our Republican friends are trying to say I said that. I said I would not do any new leases on federal lands."

Five months later, in September at a CNN Town Hall with voters from Pennsylvania, Biden was asked, "Do you support the continuation of fracking, safely and with proper guidelines of course, and growing the industry to create additional jobs for our region?"

On his campaign website, Biden does call for ending fossil fuel subsidies and for the U.S. to reach net zero emissions by 2050.

CLAIM: Kamala Harris said "I served...on the committee that's responsible for climate. Do you know that this [The Trump] administration took the word 'science' off the website and then took the phrase 'climate change' off the website."

The claim is true, but doesn’t apply to every government website.

A study put together by the environmental Data and Governance Initiative tracked U.S. government websites and found many agencies like the EPA removed and changed parts of their websites during the Trump administration.

These changes included the removal and “overhaul” of the EPA’s climate change website, changes to the White House website, and the removal of Climate Change information from the Department of State and Department of Energy websites. They also found that “in many cases, explicit mentions of ‘climate change” and ‘greenhouse gases’ have been replaced by vaguer terms such as ‘sustainability’ and ‘emissions.’”

However, not all Government websites have had the words removed. Climate.gov and Cleanet.org both have collections of government information about climate change still on their websites currently.

CLAIM: Vice President Mike Pence said that NOAA says there are no more hurricanes now than there were 100 years ago.

Yes, NOAA has summarized studies that say that. However, experts also think climate change is impacting hurricanes in other ways, such as intensity.

NOAA summarized papers released between 2008 and 2011 that said “it is likely that the increase in Atlantic tropical storm and hurricane frequency in HURDAT since the late 1800s is primarily due to improved monitoring.”

The summary found that when data was adjusted to account for improved monitoring, the number of hurricanes in the Atlantic basin in the late-1800s and today are similar. However, taking just that from NOAA’s research leaves out greater context of their position on the relationship between hurricanes and climate change. In that same paper, they say “there has been a very pronounced increase in the number of tropical storms and hurricanes in the Atlantic since the late-1980s.”

The differences in storm monitoring between the 1980s and today aren’t as great as they are between the late 1800s and today. One of the summary’s authors, Thomas R. Knutson, has more summaries listed on NOAA’s website. A summary he wrote last month on global warming and hurricanes mentions several different impacts climate change is having on hurricanes, such as increased intensity of storms and higher rainfall rates.

That summary also mentions studies that show an increase in hurricane frequency since the 1970s, but it also says those studies do not imply that increase will continue because the models they use project a decrease in Atlantic tropical storm frequency.

CLAIM: Mike Pence said, “Senator Kamala Harris was one of only 10 members of the Senate to vote against the USMCA.”

This claim is true.

The United States-Mexico-Canada Agreement (USMCA) was signed into law to replace the North American Free Trade Agreement (NAFTA). Senate documents show that the bill passed the Senate with 89 votes supporting the bill and 10 votes against. Harris was one of the 10 who voted against the bill.

CLAIM: There was a Supreme Court vacancy 27 days before Abraham Lincoln was up for re-election and he chose not to fill it until after the election.

When a seat opened up on the Supreme Court just 27 days before an election, Lincoln did wait until after re-election to select his nominee.

Justice Robert B. Taney died on Oct. 12, 1864. That year, the Election was held on November 8, which was 27 days away. According to the U.S. Senate website, which lists all the supreme court nominations dating back to 1789, Abraham Lincoln nominated Salmon Chase, as Justice Taney's replacement in the Supreme Court, on Dec. 6, 1864, 28 days after he was re-elected.

During Wednesday's debate, Harris claimed "Honest Abe said, ‘It’s not the right thing to do. The American people deserve to make the decision about who will be the next president of the United States, and then that person will be able to select who will serve on the highest court of the land.’” However, there's no evidence that Lincoln waited because he thought the seat should be filled by the winner.