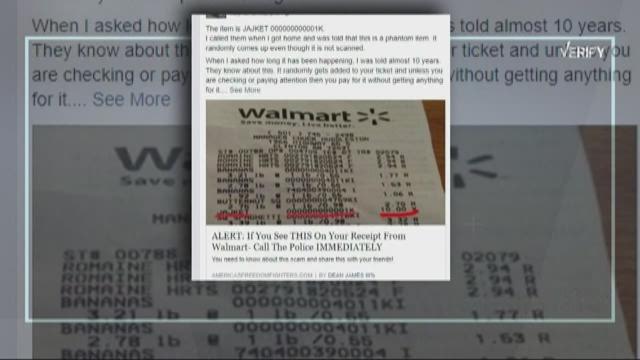 Is Walmart sneaking charges on your bill without you even knowing it?

Yes, a woman from Arkansas was overcharged by ten dollars from Walmart, but no this is not an issue happening at Walmart stores nationwide.

A post about a Walmart receipt has been widely shared on social media sites like Facebook. The post says “Alert, if you see this on your receipt from Walmart - call the police immediately.” The receipt shows a charge of $10.00 highlighted.

Sharon Bufford, the woman who originally posted the receipt from a Walmart she shopped at in Arkansas noticed the $10 charge on her receipt for an item labeled “J-A-C-K-E-T.” Sharon tells WUSA9, “The butternut squash came up but a second after it went through the butter nut squash it rang ten dollars because I saw it flash and I thought gosh that's a lot of money for butternut squash. I just assumed it was the butternut. Then she rang the spaghetti squash and it came up too well then when I got home and I looked in between them and there was something for ten dollars and I didn't know what it was.”

After WUSA9 contact Walmart about this incident, they sent us the following statement:

“We immediately began looking into this issue when it was brought to our attention and want to assure customers at our Clinton store that they are only being charged for items they purchase. We isolated the problem our customer experienced to an incorrect product barcode that one of our cashiers entered as she was checking out. The issue was immediately resolved and as a precaution, we’re training the store’s associates on what to look for should anything like that happen again and ensuring none of our other stores are affected. We reimbursed the customer for the incorrect charge, apologized to her and appreciate that she brought this to our attention.” - Charles Crowson Senior Manager Corporate Communications

But are other Walmart shoppers at risk of being overcharged for an item? A customer service manager told Sharon that mystery charges have been happening on and off at the store for 10 years. WUSA9 Verify researchers checked the code that came up on Sharon's receipt, the one that the customer service manager said she'd been seeing on and off for the last decade, running it through a Facebook search. The results showed only Sharon’s isolated incident, no one else with this same issue.

So even though internet headlines and conspiracy theories about this post may continue to be shared, as of now we can verify that this incident has only happened to one person and is not part of a larger scheme to rip of customers by Walmart.