The video has been retweeted over 400 times, and picked up by several conservative, national media outlets. 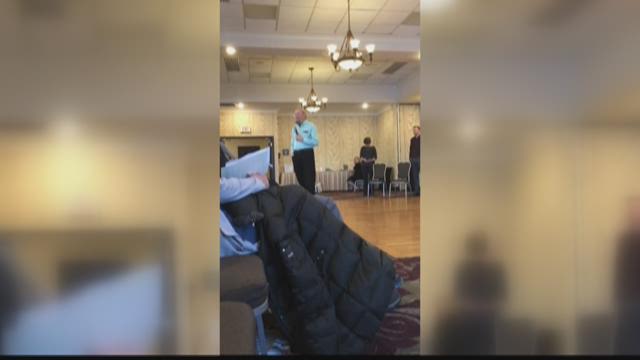 The video was released by an anonymous source on an online blog.

Several viewers and organizations have reached out to NEWS CENTER, asking about the video.

NEWS CENTER's Kristina Rex set out to verify whether it's real, and the context behind the viral video.

OUR SOURCES:
Richard Fochtmann, the man in the video – on the phone
Jason Savage, Chair of the Maine GOP – in person
Maine First Media, online conservative blog – via Facebook messenger
Maine Democratic Party – statement and Twitter messages, but they declined an interview

Here’s what Richard Fochtmann, former State Senate candidate – and at the time - the Chairman of the Leeds Democratic Committee said in the secretly recorded video: “Today I saw a thing and it said a lot of men…a lot of white men were committing suicide, and I almost thought, ‘Yeah, great,’ Then I thought about it little more and I thought maybe I shouldn't say that out in public." He received laughter from some crowd members.

The video was originally released in a tweet by a private, conservative blog called 'Maine First Media' - it has now been retweeted over 400 times, and broadcast and published by several national, conservative media outlets, from Fox News’ Tucker Carlson to the Washington Free Beacon.

What we wanted to verify: Is this video legit, and did Fochtmann joke about suicide at a Maine Democratic Party event?

THE FACTS:
The Maine Democratic party says the event was a "public forum" for "anyone interested to come and share their thoughts."

Fochtmann says he was the first one to grab the microphone. “I just went there as a public citizen, not as a former candidate or anything like that,” he explained.

He was talking about increasing diversity in Maine when he made the joke – which has now been seen by thousands.

NEWS CENTER verified that the video is legitimate because Maine First Media agreed to send an unedited, 3.5 minute clip – but would not reveal the source of the video.

THE OPINIONS:
The reaction was swift - the video was condemned by the Maine Republican Party, among others.

“The disturbing part is there is a collection of people in this state who would take humor or celebrate people taking their own lives, and those people were there at a Maine Democrat event,” said Jason Savage, the Chair of the Maine GOP.

He also called out the mainstream media for not having covered the viral video for a week. “I actually think that if the shoe were on the other foot, Maine’s newspapers would have already blown this up into a huge story if it were a Republican type of thing where something like this was said.”

The Maine Democratic Party reacted to the video release with a statement, saying that Fochtmann was there as a private citizen and in no way represents the party, and said they "will not be intimidated by far-Right Twitter accounts who hide in anonymity and spread misinformation."

They declined to be interviewed in person, saying they had no further comment.

FOCHTMANN WEIGHS IN:
Fochtmann said he regrets the joke. “It really wasn't funny, and I'm sorry that I did say that,” he said. “I just happen to be a passionate, outspoken person, and sometimes I just engage my mouth before I engage my brain.”

He also said that after he finished speaking, a woman stepped up to the microphone and told him she was offended by his comments.

He says that he later took the microphone again and apologized.

The Maine Democratic Party confirmed this in its statement.

NEWS CENTER was not able to obtain video of the apology.

Fochtmann says that on Sunday, he resigned from his position as the Chair of the Leeds Democratic Committee.

NOT THE FIRST SUICIDE JOKE:
Right around the time of election night in 2014, Governor Paul LePage made a joke about suicide. He joked that a Bill Nemitz, a reporter for the Portland Press Herald who notoriously criticized the governor, should be placed on ‘suicide watch’ should the governor get reelected.

We asked Jason Savage of the Maine GOP about this incident in 2014 – when a suicide joke became a controversy for the Republican party.

Savage said that no matter who says it, suicide is not a joking matter. He also said that he saw the Governor’s situation as more of an individual, personal conflict, versus what he says was more of a group joke.