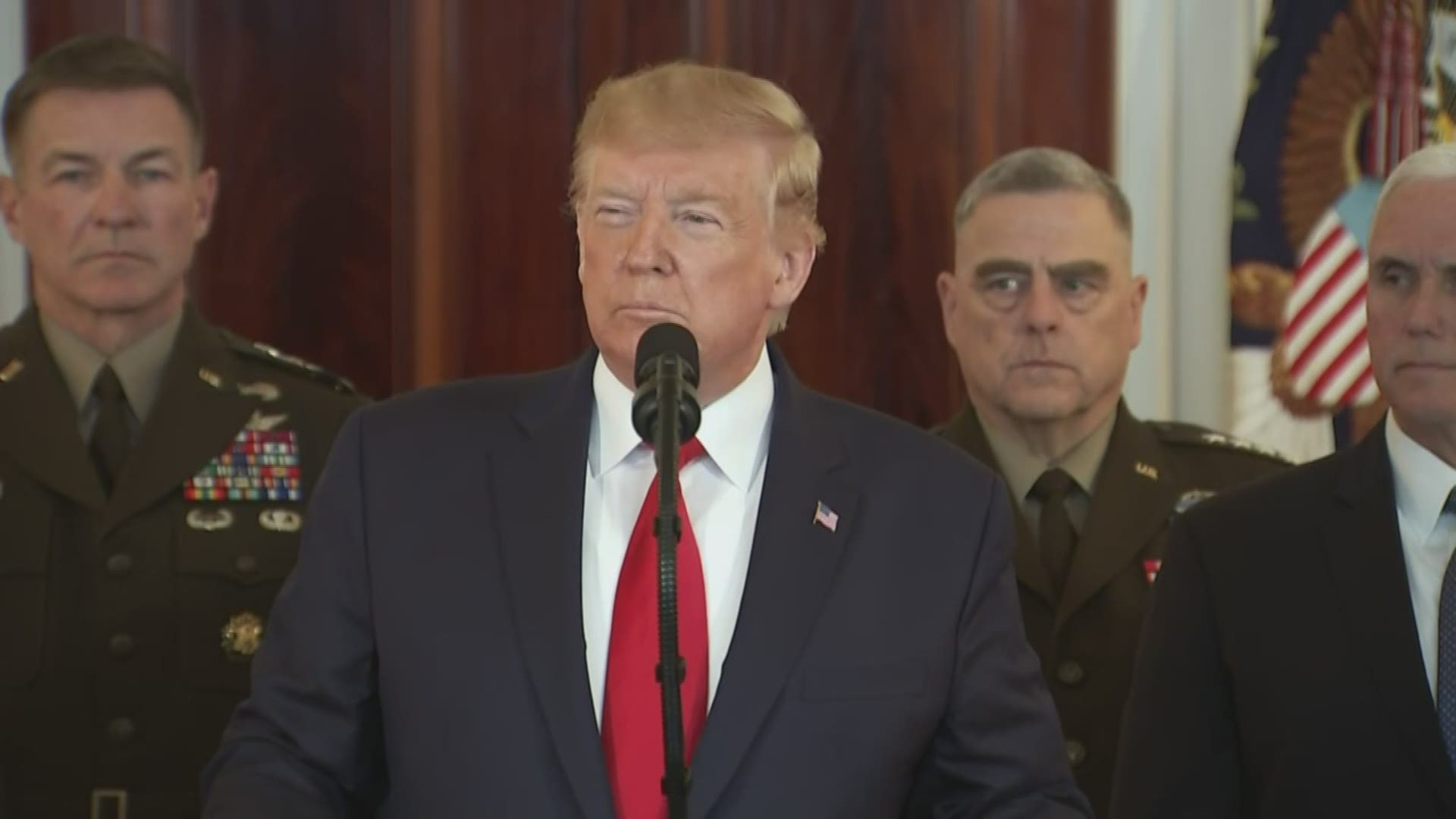 The VERIFY team fact-checked the claims he made during the speech.

CLAIM: “They were given $150 billion, not to mention $1.8 billion in cash… The missiles fired last night at us and our allies were paid for with the funds made available by the last administration.”

While there’s no way to know exactly how Iran funded the missiles it used, we can confirm that the claim about $150 billion in cash is NOT TRUE. Following the 2015 Iran nuclear deal, the United States Department of the Treasury estimated that $50 billion in Iranian liquid assets would be freed following sanctions relief. This was Iran’s own money that was frozen in various foreign banks during sanctions. The Treasury Department estimated the Central Bank of Iran had another $50-70 billion worldwide that would not become accessible following sanctions relief. Even if you include the unusable $50-70 billion, it’s still less than the $150 billion that Trump has claimed and they weren’t given the money--the money was Iran’s from the start.

The cash payment Trump referred to was related to military sales prior to the 1979 Iranian revolution. That payment was $1.7 billion, not $1.8 billion and it was unrelated to the Iran Nuclear Deal.

If those numbers hold through the end of the year, it would mark the first time the U.S. is energy independent since 1957, according to the RPC.

CLAIM: “...after destroying 100% of ISIS and its territorial caliphate…”

It’s true that the territorial caliphate of ISIS has been defeated, but not true that 100% of ISIS is defeated.

On March 23, 2019, ISIS’s last territorial claim was captured by the Syrian Defense Force. Since then, however, the U.S. Department of Defense has maintained ISIS still exists.

RELATED: President Trump: Iran appears to be 'standing down' after missile attack

On July 26, an article posted on the Defense Department’s website said, “the physical caliphate is defeated, but ISIS has not disappeared. ISIS has reverted to a guerrilla group, with individuals banding together to launch small attacks.”

On a Defense Department report of 2019’s second quarter, they said, “Despite losing its territorial ‘caliphate,’ the Islamic State in Iraq and Syria (ISIS) solidified its insurgent capabilities in Iraq and was resurging in Syria this quarter.”

Even after the U.S. killed ISIS’s leader, Abu Bakr al-Baghdadi, in an October raid, ISIS named a new leader.

CLAIM: “We are now the number one producer of oil and natural gas anywhere in the world.”

The International Energy Agency says the United States is the world’s leading producer of natural gas, ahead of Russia.

Therefore, this claim is VERIFIED.