VERIFY: Could the dead birds from China seized at Dulles carry Coronavirus? Breaking down this and other questions about the incident

Can these birds carry Coronavirus? Did the current epidemic start by eating bat soup? Can people be arrested for bringing dead birds from China? We're Verifying. 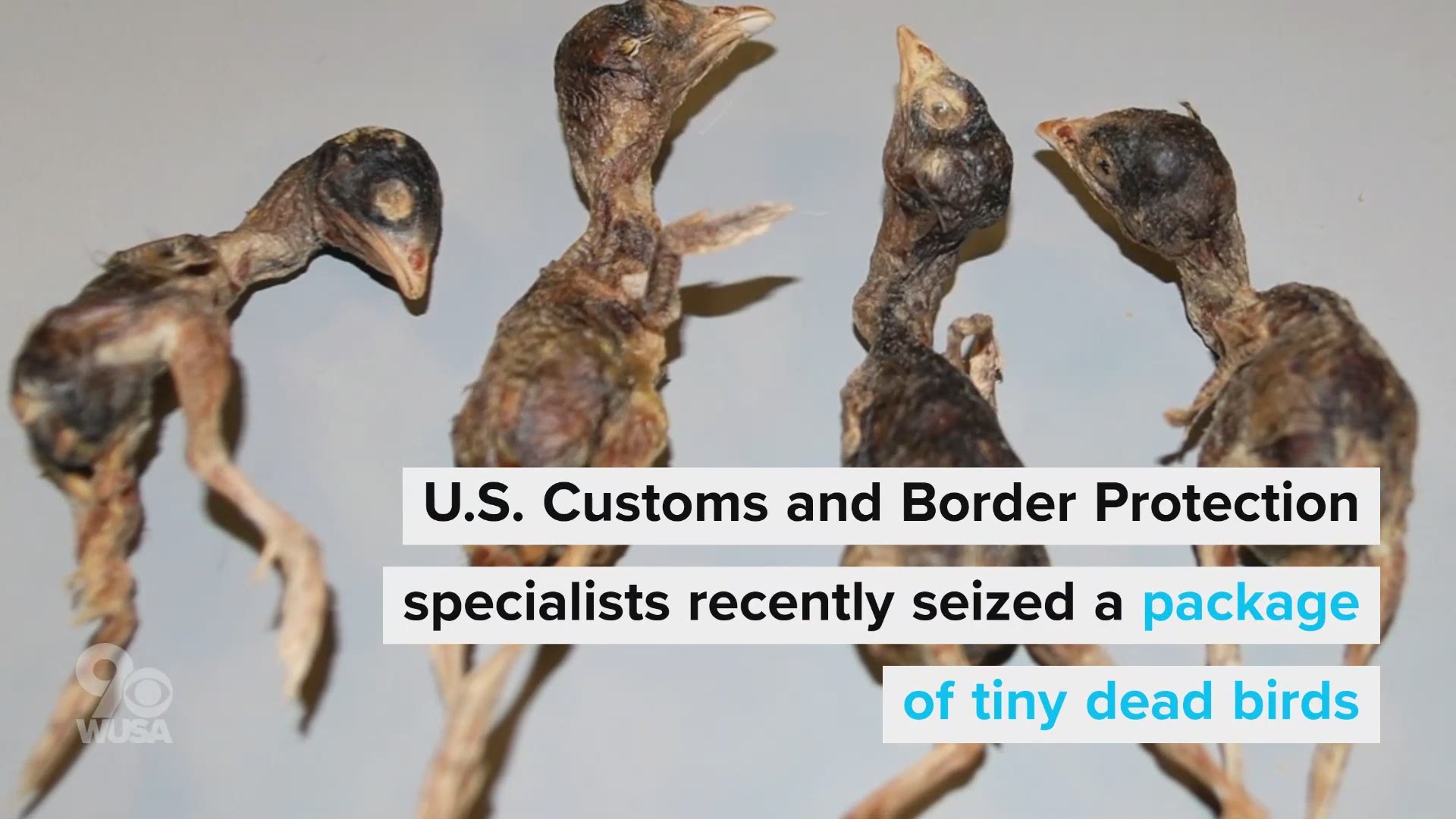 Is it possible that these seized birds carried the latest strain of the Coronavirus, that is spreading across China?

Yes, but unlikely. Various experts told The Verify Team, that while it's possible, the likelihood of birds carrying the latest strain, remains unlikely.

When news broke about the Dulles seizure of birds, the response was widespread on social media, with concern that this could mean the spread of that latest strain of Coronavirus.

"Can these spread the Virus," one person asked.

"Those birds (were) probably carrying the Coronavirus," wrote another.

To find out if this is actually true, the Verify Team called Mohamed Medhat El-Gazzar from Iowa State University and Siba Samal, from The University of Maryland.

"We don't know much about this virus," said Samal. "So we need to take precautions."

Samal said that birds do have "their own Coronaviruses," just like all animals do. He said it was unlikely that it would jump from species to species, although it is possible.

"We know this jumped from species to species before," he said. "So the possibility lies."

"It is unlikely that birds carry this specific outbreak virus," he said. "Because it is thought to come from bats, which are mammals."

That being said, El-Gazzar said we shouldn't take the possibility lightly.

"That does not mean it's impossible," he said. "To cross-species."

Did the spread of the current Coronavirus strain start when someone ate "bat soup," like many are claiming online?

Likely not. The origins of this latest strain remain unclear. While the strain likely did come from an animal, there's no evidence that bat soup had anything to do with this.

Soon after news came out about the dead birds seized at Dulles Airport, the online comments began. Many started to spread rumors about how the latest strain of the Coronavirus first began.

"I read somewhere it started from bat soup," wrote one person.

"I read it was from eating wolves," wrote another. "And Koala bears."

To find out the truth, the Verify Team turned to the Centers for Disease Control and Prevention. The CDC said that this latest strain of coronavirus was likely caused by animal-to-human transmission.

"Early on, many of the patients in the outbreak..." wrote the CDC. "Reportedly had some link to a large seafood and animal market, suggesting animal-to-person spread."

The CDC also said that the latest strain is a "BetaCoronavirus," which like MERS and SARs have origins in bats.

However, there's no evidence indicating that bats, in particular, were the cause.

"I don't think anyone in the world knows what actually happened," said Assistant Professor Mohamed Medhat El-Gazzar, from Iowa State University. "In these cases, it's very hard to pinpoint where it started."

Professor Siba K. Samal, from the University of Maryland, said that it was very unlikely that it came from "Bat soup," as has been stated online.

"The virus is much less likely to survive if cooked," he said.

Has the U.S. completely stopped travel from China to the United States?

No. Although there are some major restrictions.

In the aftermath of the dead birds being seized at Dulles, there were a lot of questions about what travel restrictions exist between China and the United States.

"I thought they stopped travel from China," said one person on Facebook.

Secretary of HHS, Alex Azar announced the restrictions on Jan. 31, 2019. United States citizens, permanent residents, and their families are still able to travel from China, although everyone else is restricted.

"These prudent and targeted actions will decrease the pressure on public health officials," he said at the time. "Screening incoming travelers, expedite the processing of U.S. citizens returning from China, and ensure resources are focused on the health and safety of the American people."

Azar also announced that President Trump signed a "presidential proclamation" suspending entry into the U.S. of all foreign nationals, except the immediate family of U.S. citizens and permanent residents.

The Bureau of Consular Affairs has also issued a pretty strong warning to any U.S. citizens wishing to travel overseas.

"Do not travel to China," they wrote.

The BCA also announced that Chinese authorities have "suspended air road and rail travel in the area around Wuhan and placed restrictions on travel and other activities throughout the country."

RELATED: VERIFY: Is it too late to get the flu shot? Is this year's vaccine not as effective?

RELATED: VERIFY: Are our pets at risk of getting the latest strain of coronavirus?