VERIFY: AstraZeneca still recommended and being tested as blood clot reports are investigated

The vaccine is being investigated for reports of blood clots, but it isn't believed to be the cause of them and it is not distributed in the United States. 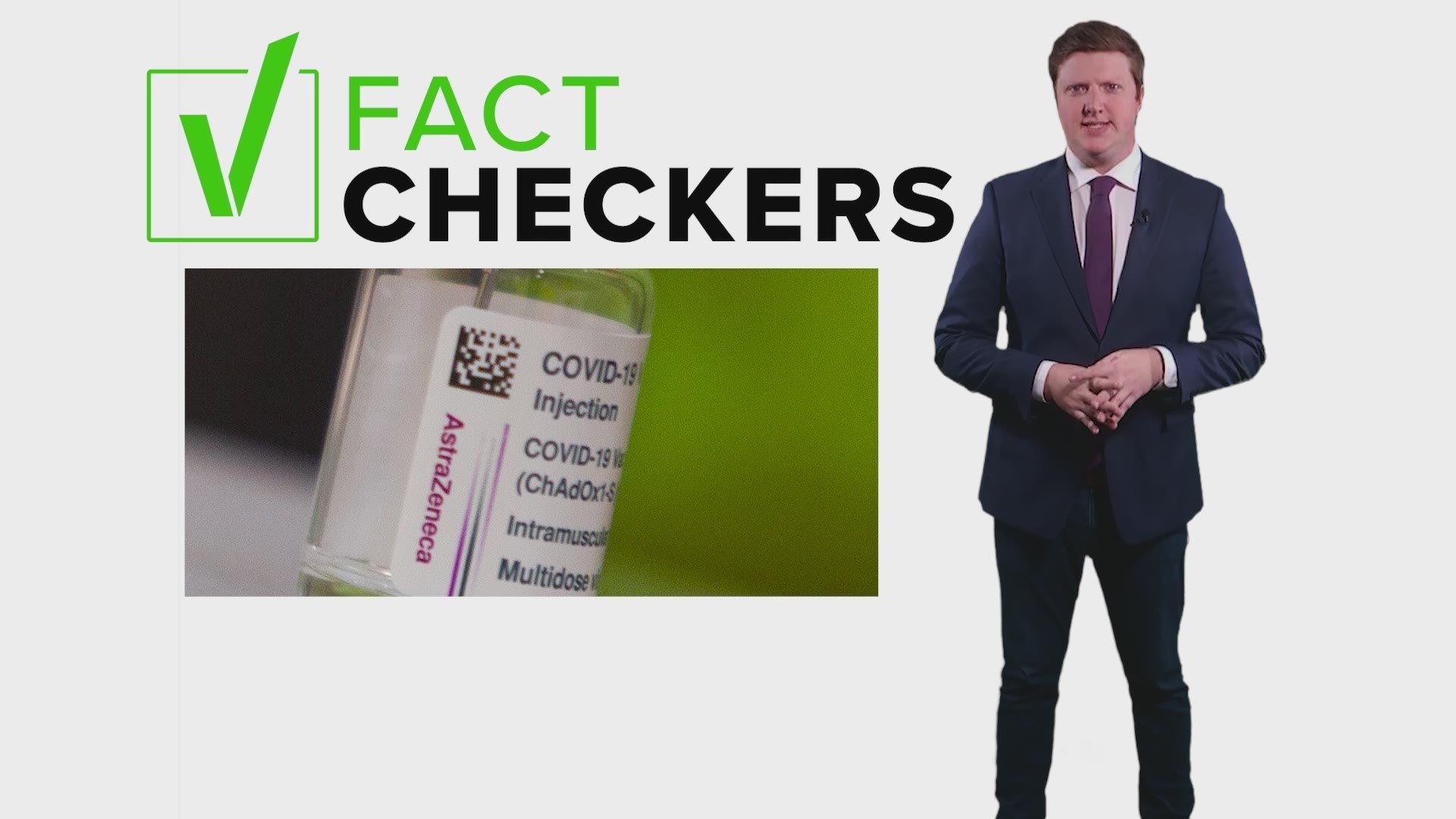 UPDATE: The European Medicines Agency released a statement after concluding their investigation into the AstraZeneca vaccine. The EMA says the benefits of the vaccine still outweigh the risks and it is not associated with an increase in the overall risk of blood clots. It may be associated with very rare cases of blood clots associated with thrombocytopenia, which "deserves further analysis."

The story below was written and published prior to the conclusion of the EMA's investigation and statement.

News outlets across the world are reporting the AstraZeneca COVID-19 vaccine’s distribution is being paused in several countries because of blood clots. That can be alarming to read, but that doesn’t actually mean that the vaccine is causing blood clots and it doesn’t change anything in the United States.

Did several countries stop distribution of the AstraZeneca COVID-19 vaccine? Does it cause blood clots? How does that affect me?

WHY WE ARE VERIFYING

When a country halts the distribution of a vaccine, especially of a vaccine as high-profile as any of the ones used for fighting COVID-19, it’s going to get a lot of attention. Some people may be confused and anxious about vaccine safety after being bombarded by news reports and social media posts regarding the AZ vaccine.

RELATED: VERIFY: Vaccine efficacy is about the reduction of risk in disease

Several countries have temporarily halted distribution of the AstraZeneca COVID-19 vaccine until claims about potential blood clotting side effects are investigated. There have been roughly 30 reported cases out of nearly 5 million administered doses of the AstraZeneca vaccines.

The European Medicines Agency said it will conclude its investigation on Thursday and determine if any further action needs to be taken. While the EMA has been optimistic thus far, we can’t conclusively determine whether the AZ vaccine is contributing to blood clots until that investigation concludes.

While the AZ vaccine is undergoing clinical trials in the United States for approval, it is not currently approved for use in the U.S. The vaccine in question here is not one of the three vaccines currently being distributed in the U.S.

A March 11 press release from the EMA acknowledged that the Danish Health Authority and the health departments of several other European Union member states had paused distribution of the AstraZeneca COVID-19 vaccine.

The Danish Health Authority pushed out its press release earlier that day. It said its pause on the vaccine campaign would be for 14 days and was based on a “precautionary principle.”

The reason it has paused the campaign was because of “reports of severe cases of blood clots in people who have been vaccinated with the COVID-19 vaccine from AstraZeneca” which caused the EMA and other bodies to launch an investigation into the vaccine. It added, “at this stage, it is too early to conclude whether there is a link between the vaccine and the blood clots.”

Much of the Danish Health Authority’s release stresses that the pause is in the abundance of caution so the agency can do its due diligence. It said it is reacting “swiftly and promptly if there is the slightest indication of possible risks associated with the vaccine” and “there is strong evidence that the vaccine is both safe and efficacious.”

In the EMA’s March 11 press release, it said “there is currently no indication that vaccination has caused these conditions, which are not listed as side effects with this vaccine.”

Story continues below this video. Check out previous stories on the VERIFY YouTube channel.

The reason for these optimistic stances is because the EMA says the number of reported blood clots in vaccinated people isn’t any higher than the number seen in the general population. It said there have been 30 of these severe blood clot events after nearly 5 million Europeans have been vaccinated.

The EMA’s most recent press release on this from March 15 basically informed people the investigation was ongoing and a conclusion would be reached Thursday. That press release included in bolded text, “while its investigation is ongoing, EMA currently remains of the view that the benefits of the AstraZeneca vaccine in preventing COVID-19, with its associated risk of hospitalisation and death, outweigh the risks of side effects.”

Additionally, the EMA told people “anyone who has received the vaccine and has any concerns should contact an appropriate healthcare professional.”

The World Health Organization has said in its last two news updates that it has been working with the EMA on its investigation and has reiterated many of the same stances the EMA included in its press releases. The WHO added, “Vaccination against COVID-19 will not reduce deaths from other causes. Deaths from other causes will continue to occur, including after vaccination, but causally unrelated.”

Regardless of the findings, this currently does not affect Americans. The Centers for Disease Control and Prevention confirms that the three vaccines currently in distribution in the United States are the Pfizer, Moderna and Johnson & Johnson vaccines, none of which are under investigation for similar issues. The AZ vaccine is one of two vaccines currently being trialed for approval in the U.S., but has not been approved for distribution as of yet.

The AstraZeneca vaccine’s distribution has been paused by several countries while it’s under investigation for severe blood clotting side effects.

The investigating bodies have noted that the vaccinated population has not suffered from blood clots at a higher rate than the general population. While the investigation is ongoing, they continue to maintain that the benefits of vaccinating against COVID-19 outweigh the risks of the side effects.

However, this vaccine is not distributed in the United States outside of clinical trials. It should not affect vaccine distribution in the U.S.