No, the US did not leave military service dogs in cages at Kabul airport like viral posts claim 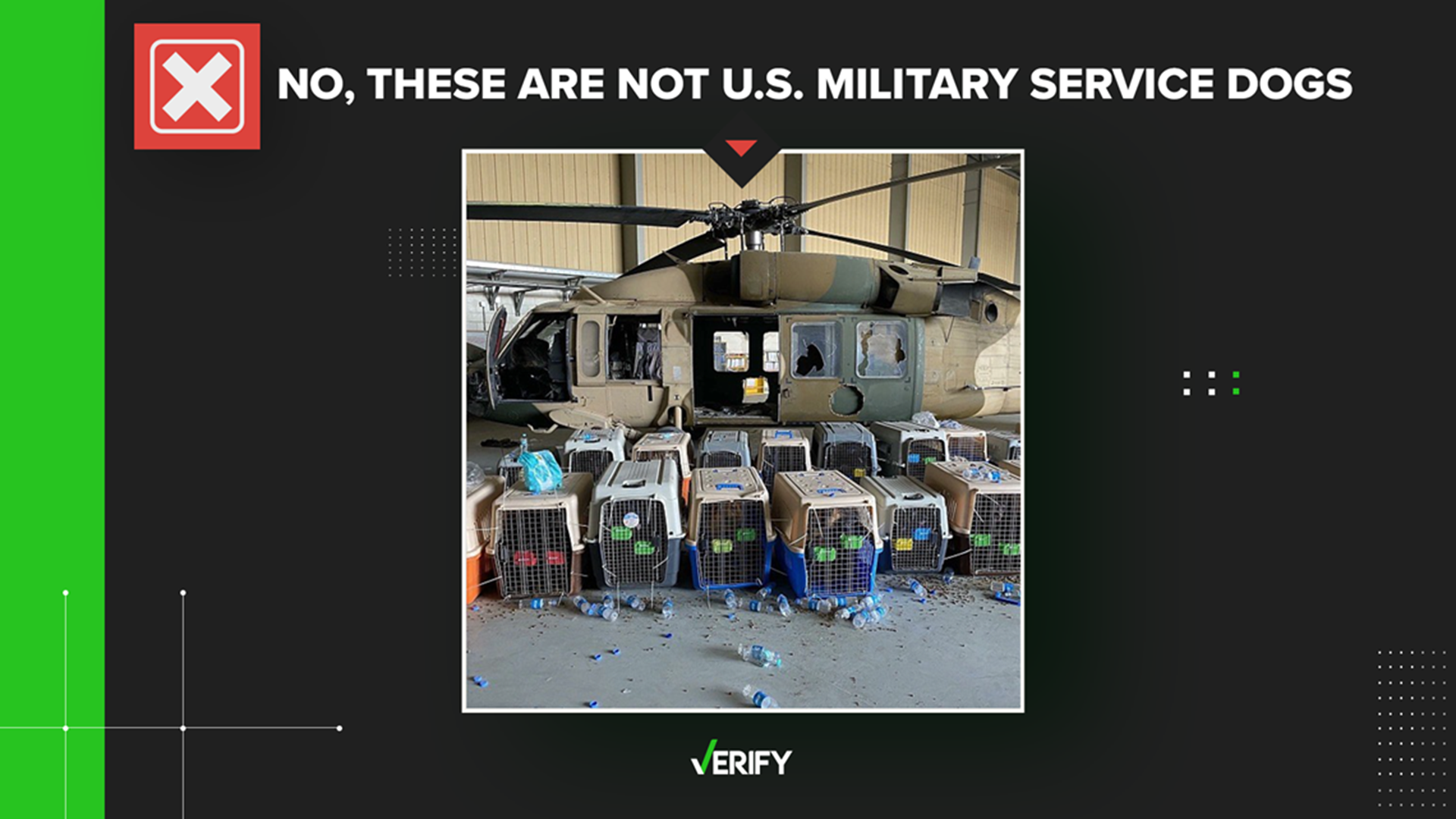 President Joe Biden gave an Aug. 31 deadline for a full military withdrawal from Afghanistan, ending America’s longest war. The last of the soldiers have left the region, but some speculated the military abandoned service dogs in Kabul.

One tweet, from Richard Grenell, a former ambassador to Germany under the Donald Trump administration, called for the firing of White House National Security Advisor Jake Sullivan and Secretary of State Antony Blinken for the alleged abandonment, claiming “they should also be known for abandoning service dogs in locked crates.” Grenell has more than 590,000 followers, and that tweet had more than 1,900 retweets and over 4,000 likes as of Aug. 31.

Actor James Woods on Aug. 30 wrote: “Our helpless service dogs, caged and abandoned at the Kabul airport, left to starve to death.” His tweet had more than 26,000 retweets. Other tweets and Facebook posts with the same image have been shared thousands of times.

Does this photo show U.S. military service dogs in cages left behind in Afghanistan?

“To correct erroneous reports, the U.S. Military did not leave any dogs in cages at Hamid Karzai International Airport, including the reported military working dogs. Photos circulating online were animals under the care of the Kabul Small Animal Rescue, not dogs under our care,” Pentagon Press Secretary John Kirby tweeted.

To correct erroneous reports, the U.S. Military did not leave any dogs in cages at Hamid Karzai International Airport, including the reported military working dogs. Photos circulating online were animals under the care of the Kabul Small Animal Rescue, not dogs under our care.

The online correction came after the photo went viral on Aug. 31, with posts claiming dogs were left stranded in cages at Kabul’s Hamid Karzai International Airport after U.S. service members withdrew from the country.

The Military Working Dog Team Support Association, Inc.﻿ posted on Facebook they were "100% certain that there are zero US military working dogs abandoned in Kabul. Zero. The US military did not leave a single MWD behind."

Department of Defense (DOD) spokesman Eric Pahon told VERIFY the dogs in the photo were “never the responsibility of, or under the care of the U.S. military.”

Pahon said “it appears some of the dogs were the responsibility of private contracting companies.” He also confirmed no “military working dogs” were left in cages at Kabul’s airport.

“The photos were taken before the dogs were released,” Pahon told VERIFY. “We did not leave any U.S. Military dogs in Afghanistan, nor turn any over to KSAR [Kabul Small Animal Rescue].”

The Kabul Small Animal Rescue (KSAR), founded by American Charlotte-Maxwell Jones, has aided in the rescue of more than 40 “working dogs and several personal pets belonging to fleeing Americans” and took them back to a shelter seven miles outside of Kabul, according to the SPCA International.

SPCA International said in the statement an aircraft that had been secured to transport rescued dogs in the care of KSAR out of Afghanistan was “not ultimately allowed to take the animals and their caretakers safely out of the country.”

The Centers for Disease Control and Prevention (CDC) recently issued a temporary suspension for dogs imported from high-risk countries for dog rabies. According to the CDC, Afghanistan has a high risk of dog rabies. But in a statement to VERIFY the agency confirmed, the “CDC worked closely with the DOD and DOS to issue permits for the evacuation of all US government-owned working dogs per the agency's requests.”

At the time of publishing, KSAR had not confirmed on Twitter or Facebook if the dogs pictured in the cages are in its custody. VERIFY has reached out to the organization for comment.

MORE FROM VERIFY: Yes, President Biden attended the dignified transfer of 13 US troops killed in Afghanistan