Puerto Rican family who lost two houses in the earthquakes says they only received $1,000 in relief funding

The Pacheco family hoped that living outside would be temporary. FEMA relief aid would help them fix the damage to their houses. That is not their reality. 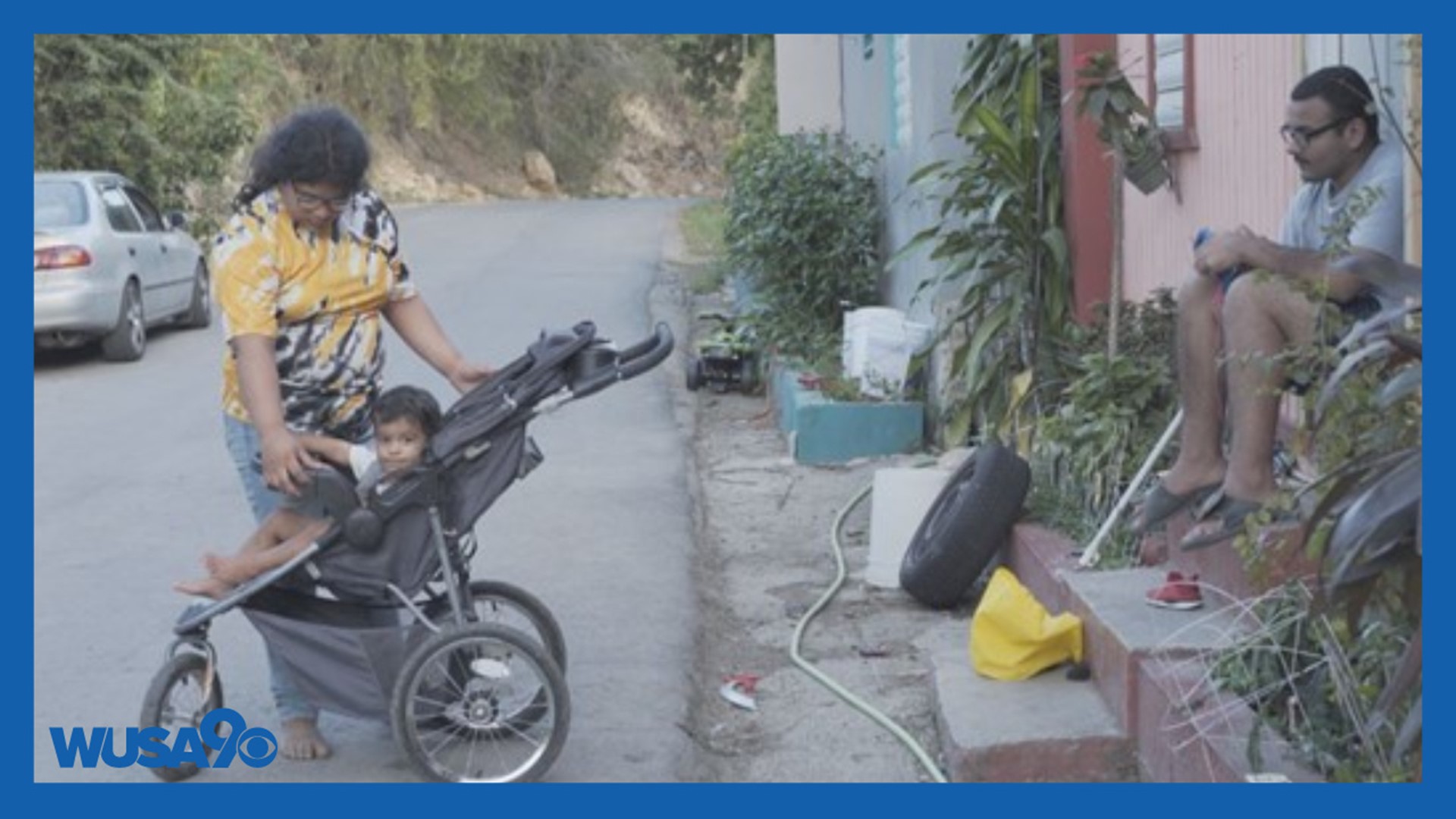 YAUCO, Puerto Rico — Mike Pacheco, his three children, their mother, his mother-in-law, sister-in-law, son-in-law, grandson and some cousins all live in a makeshift house in Yuaco, Puerto Rico.

It's a town in the southwest corner of the island. An area that was hit hard by a series of earthquakes which culminated with a 6.4 quake on January 7.

Mike, the patriarch of the family, built the makeshift house out of blue tarps and donated wood. It sits right across the street from the two houses they used to live in.

The temporary structure Mike built for his family was supposed to be just that — temporary.

But that's not the case.

The Pacheco's were relying on FEMA funding to fix the damage to both of their homes. They told WUSA9 that they only received $1,000. That money was allocated to just the blue house.

RELATED: 'He couldn’t handle being here' | After the earthquake, Puerto Ricans struggle to rebuild

The Pacheco's didn't file for a permit when they built their homes. As a result, FEMA will not allocate more funding to them.

Mr. Miyamoto visited the houses a few weeks ago to assess the damage.

He determined that the blue house was a red tag — meaning it is not safe to enter. The pink house, he labeled a yellow tag; falling hazards (ex. a cracked cement wall holding up the front of their house) preclude entry to the main living area.

Credit: WUSA9
Here are what the tags mean when a home is evaluated.

Mike Pacheco is on a fixed income.

In 2010 he suffered a back injury that put him on disability. He doesn't have the money to fix these houses with his own finances and he says he doesn't have homeowners insurance.

On Tuesday, FEMA built the Pacheco family a temporary bedroom and bathroom. That is helpful, but it's not enough.

Even if they sleep inside of the structure FEMA built for them, the Pacheco family still has to live outside.

Their kitchen is outside, all of the possessions they were able to save from the house are sitting outside.

The only security they have is Mike, who stands guard day and night, making sure that his family is safe.

Credit: WUSA9
Father and son sit outside of Camp Biquingo

"If I'm lucky, I get an hour of sleep a night," Mike Pacheco told WUSA9. "I sleep in my car with a machete. Every so often I get up, walk up and down the street just to make sure everyone is safe."

The Pacheco's, like many families on the island, built their own home. They built it little by little as the funds were available.

People should build their houses with permits and to code, sure, but the reality of the situation is that people don’t always have the means to do that. In those cases, we asked Miyamoto, what can be done to make sure that people who are building their own homes know the best practices.

“In Port-au-Prince, our team trained almost 7,000 masons to construct 12,000 houses out there," Miyamoto said. "Today when you go to Port-au-Prince, habits have completely changed. You see actual good detailings with rebar and all of the ties that I was talking about. You can see it even in informal areas where there’s no enforcement at all because the masons understand how to do it right.”

Miyamoto was able to do that work through a program instituted by the government of Haiti in conjunction with the World Bank. So is there a similar program existed in Puerto Rico? The answer, Miyamoto said, was no.

“I think that after this earthquake things will change now that they see how dangerous those houses are,” he said.

But even if engineering firms like Miyamoto’s were brought into Puerto Rico to activate a similar program, he believes that it would take years to see the culture change.

"Those masons are professionals," Miyamoto said. "They’ve been practicing the one technique for years. Changing their habit is no easy task. You can’t just give seminars; you have to work with them."

From what Miyamoto learned from his work in Haiti, this program not only helps the masons learn how to implement the changes but understand why those changes are necessary.