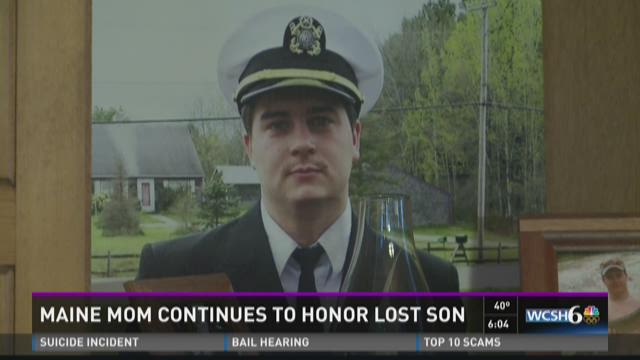 WILTON, Maine (NEWS CENTER) -- Deb Roberts, the mother of Michael Holland, who was a crew member from Maine who died on the El Faro, said she has listened to some of the Coast Guard hearings, but has focused her attention on honoring her son.

Roberts is organizing an ice fishing derby at Round Pond in Livermore. All the proceeds will go to the Holland Strong Community Scholarship.

"It's just not something I want to consume my life. It's not where I want to put my energy," said Roberts about the Coast Guard hearings. "I let the experts do that work."

Roberts has spent the past few weeks planning and organizing the "HollandStrong First Annual Fishing Derby."

The derby is on Saturday, February 27 at Round Pond in Livermore. The entry fee is $5 per person. Registration begins at 5 a.m. and ends at 10 a.m. The event runs until 4 p.m.

Roberts said she is still working on the details, but she intends for the scholarship to be awarded to a graduating senior from Leavitt, Spruce Mountain, or Mount Blue High Schools: Roberts works in MSAD 52, Holland graduated from what was once Jay High School, and lived in Wilton as an adult.

Ice fishing was one Mike's favorite activities, according to Roberts.

So far, 36 local businesses have contributed to the derby and scholarship.

"He was an outdoorsman. He did a lot of fishing and stuff. That's how I met him," said Joe Belanger, an employee at Grondin's who said he met mike at Round Pond in Livermore.

"It's just the right thing to do," said Mike Grondin, owner of Grondin's Auto Body. "We're willing to help out the community if we can, and everybody is supporting her and thinking of her. It makes you feel good."

Roberts said the scholarship fund currently has about $14,000. With more than 150 people expected to attend, Roberts said she is excited about the possible turnout and contributions.

Roberts said that the ways to remember and honor her son have helped focus her attention.

"No matter what, or who, or when, my son is not coming home. So my focus is on always remembering him, because it will fade away for others, but it won't for me," said Roberts.

There is a "special" auction at noon, as well as a toast to Mike and the performance of "HollandStrong," a song written by a local band.