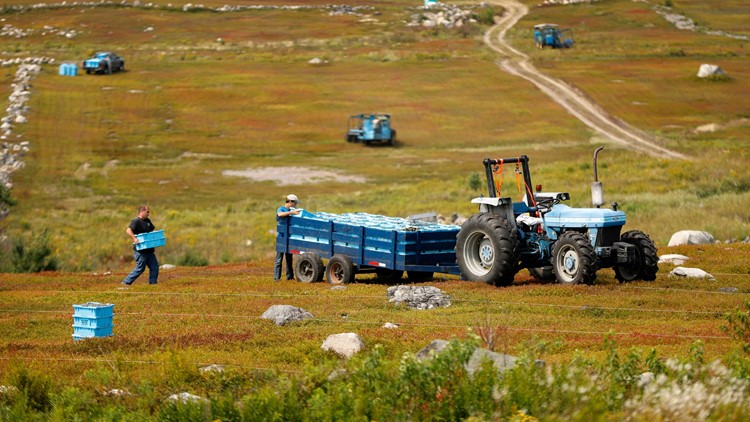 Photo by: AP Photo/Robert F. Bukaty, File
In this Friday, Aug. 24, 2018, file photo, Ken Cox carries trays of wild blueberries to a tractor at a farm in Union, Maine. The latest Census of Agriculture shows the number of U.S. farms and ranches has fallen but the remaining operations are larger and are responsible for a higher percentage of agricultural sales. The U.S. Department of Agriculture released the 2017 Census of Agriculture on Thursday, April 11, 2019.

PORTLAND, Maine — Maine's two U.S. senators are joining with colleagues in an effort to take away a barrier for American farmers who want to sell products to Cuba.

Republican Sen. Susan Collins and independent Sen. Angus King say the proposal would help the U.S. agricultural industry by removing restrictions on private financing for the exports. They say in a statement the move is about "leveling the playing field for American farmers to open up a significant new export opportunity."

Collins and King are joining with 11 other senators on the proposal. Six of the senators are Democrats and five are Republicans.

The senators say American farm products face a disadvantage in the Cuban market because the current trade rules require Cubans to pay with cash up front for U.S.-grown food.