Collins said she feels winning is an affirmation of the work she's doing in Washington, "to fight hard every day for the people of Maine." 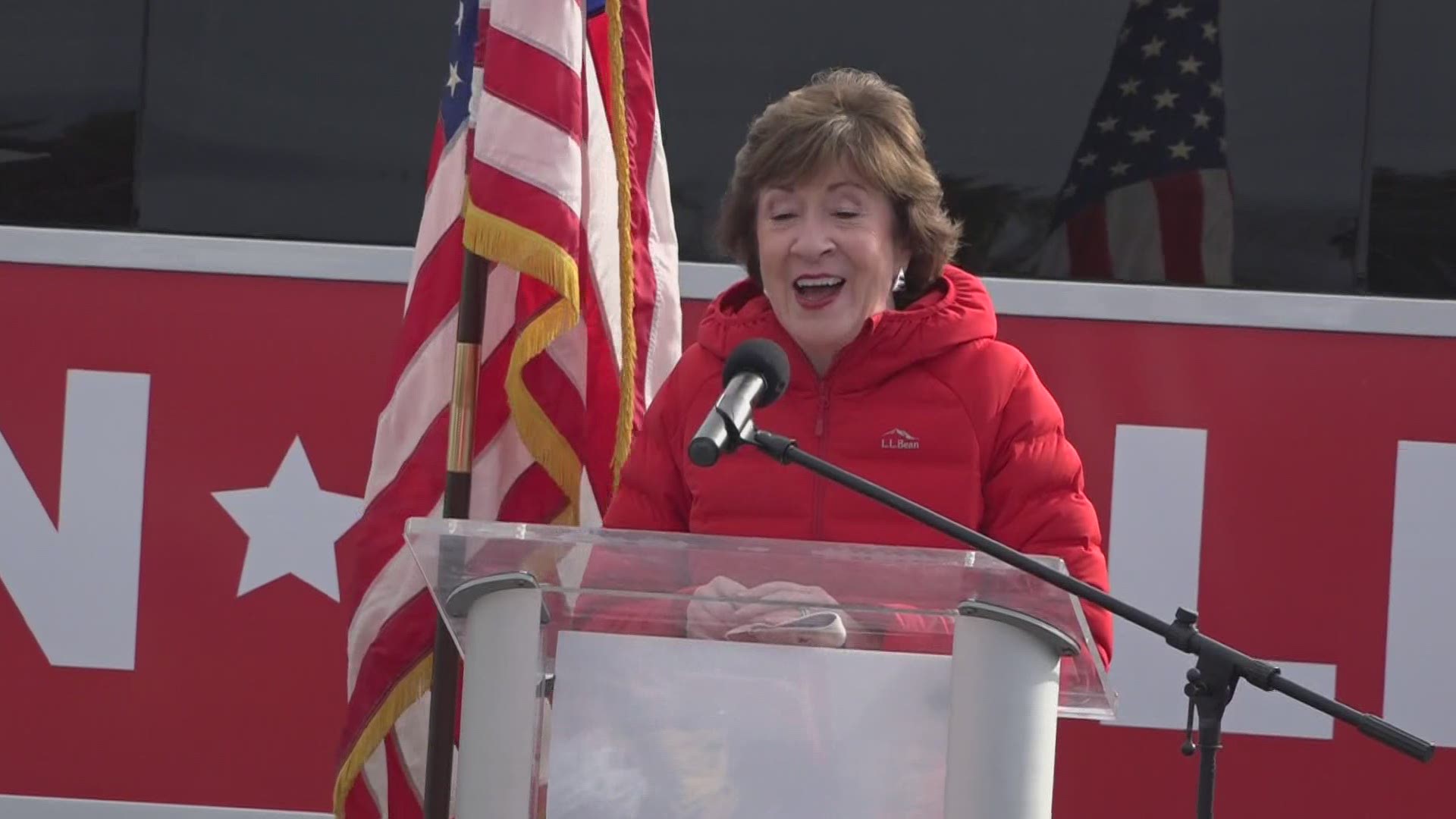 Addressing supporters Wednesday, Collins said she had a "good talk" with Gideon, and thanked her for taking the time to call.

With 98 percent of results reporting, Collins is leading 51 percent to 42 percent; The Associated Press called the race for Collins shortly after Gideon conceded. The race used ranked-choice voting, a process that requires a candidate to win by more than 50 percent of the vote. Otherwise, the race would have run off into ranked-choice tabulation.

Maine Secretary of State Matt Dunlap determined Wednesday that ranked-choice voting tabulation will not be necessary for any of the RCV races in the general election, as all candidates have won their races with more than 50% of the vote.

RELATED: Election updates from Maine Secretary of State: '91% of towns have finalized their work.'

"Let me say what an extraordinary honor it is to represent the great state of Maine and to know that I will have the opportunity to serve all of Maine for the next six years," Collins said.

Collins said she feels winning is an affirmation of the work she's doing in Washington, "to fight hard every day for the people of Maine."

Collins noted the historic nature of her win, saying she's now the first person since Maine directly elected its senators to win a fifth term.

"Thank you so much to the people of Maine, thank you!" Collins said.

Gideon addressed her supporters Wednesday afternoon after conceding the race. She said she's "proud of the campaign we ran."

"Regardless of the result, together, we built a movement that will make progress for years to come," Gideon said.

Thank you, Maine. I’m proud of the campaign we ran, regardless of the result—together we built a movement that will help us make progress for years to come.

While this election may be over, we can't afford to stop organizing. So let’s get some rest, and then get back to work.

“While this election may be over, we have to work together to build a better future. One where everyone has access to health care they can afford. One where we tackle our climate crisis head-on, and one where we restore our economy by prioritizing hard-working people and their families," Gideon said.

"I was excited by the possibility that, for the first time, a U.S. Senate race would be decided via ranked-choice voting. Unfortunately, it looks like that is not to be. I am left only to congratulate Susan Collins on her victory. I wish it were otherwise," Savage said.

Thank you to everyone who ranked me first. We are a growing movement for people, planet, and peace over profit - and there are more of us every day. Thank you for helping us find each other through this campaign. Now that we’re together, there’s nothing we cannot do.

Regardless of the results, Savage said she's proud that she was part of the race, and the work her campaign has done.

“History is in the offing. Let it be known that the time of ‘spoilers’ and ‘lesser evils’ is over. We are now in the time of coalition building and a new politics. Here’s to a ranked-choice future," Savage said. Read Savage's full remarks below.

Linn issued a statement late Tuesday night, thanking his family, volunteers, and supporters. He wished the best to his opponents Collins, Gideon, and Savage.

Following the news of Collins' win, the Maine Republican Party issued a statement congratulating her.

"To all the out-of-state groups who thought they could take out Susan Collins: Maine is not for sale," Maine GOP Chair Dr. Demi Kouzounas said.

Collins, 67, was born and raised in Caribou and lives in Bangor with her husband.

Gideon, 49, was raised in Rhode Island and moved to Freeport, Maine, in 2004, with her husband, where they live with their three children. She served on the Freeport Town Council and was elected to the Maine House in 2012, 2014, and 2016, serving as assistant majority leader and then speaker of the house.

The high-profile campaign, which could have tipped the U.S. Senate from a Republican to a Democratic majority had Gideon won, was the costliest political race in Maine history, with Gideon raising nearly $70 million and Collins $27 million. More than $120 million was spent by the two candidates and outside groups on television advertising, according to the Associated Press.

The campaign was also the ugliest in Maine's history, with both candidates claiming they were the subject of false attack ads paid for by out-of-state money, and both campaigns ran negative ads during the final weeks of the race.

Democrats focused on Collins' votes for Supreme Court Justice Brett Kavanaugh and President Donald Trump's tax cuts, while Collins' ads noted Gideon was not born in Maine and claimed that as Speaker of the House, she failed to reconvene the Legislature during the pandemic -- although when Gideon polled Legislators about reconvening, all Republicans but one declined.

“Watching the results come in, I admit I am disappointed. I was excited by the possibility that, for the first time, a U.S. Senate race would be decided via ranked-choice voting. Unfortunately, it looks like that is not to be. I am left only to congratulate Susan Collins on her victory. I wish it were otherwise.

“Regardless, I am proud that I was a part of this race, and I am immensely proud of the work this campaign has done. From my husband Mark driving me over hill and dale for the past year to our incredible field team that brought so much joy to this race, I have been grateful to have such an amazing team alongside me advocating for the people of Maine.

“Without us in the race, there would have been no candidate to advocate for Medicare for All, despite it being supported by 69% of U.S. residents, and despite the race being conducted in the middle of a global pandemic, leaving people with thousands of dollars in medical bills.

“Without us in the race, there would have been no candidate to advocate for a demilitarized Green New Deal, even though 58% of U.S. residents support the kind of emergency response to the climate crisis that I am proposing, and the race being conducted during the nation’s most active hurricane and wildfire season on record.

“Without us in the race, supporters of positions like demilitarizing the police, offering universal childcare, providing free public university education, and cancelling student debt would have had no candidate representing their values. In fact, without us in the race, it’s unlikely anyone would have heard much about policy proposals at all. Susan Collins didn’t have a single policy position on her campaign website. Sara Gideon’s website inexplicably had no mention of foreign policy, the coronavirus, or racial justice. On what were voters to base their opinions?

“Apparently, just a lot of mean-spirited advertising, which turned everyone off and hampered the collective mood of our great state.

“If nothing else, I hope I showed Mainers the kind of positive, informed, people-powered, straightforward, and transparent campaign that’s possible under ranked-choice voting. I hope Mainers are beginning to understand the way RCV allows them to vote in accordance with their values, though I heard many times on the campaign trail from voters who felt the need to support the candidate with the ‘best chance to win.’

“It will take time for Mainers to fully grasp the way elections and campaigns are different under ranked-choice voting.

“Already, however, they know that something must be done about ‘getting big money out of politics.’ Somehow, the two corporate-party candidates purport to support this goal, and yet they have managed to conduct the most expensive campaign in the history of Maine.

“This year, Collins and Gideon will have spent, even without counting money spent by outside parties, right around $95 million. That is not a Maine-scale election. It is an abomination, while little kids all across the state go to bed hungry. The Maine people are not well served by this kind of election and this kind of politics.

“Hopefully, Mainers see that RCV represents a new politics, a way forward, where spending endless amounts of money on TV ads with menacing voiceovers and unflattering photos hurts a campaign more than it helps. Time and again, I have heard from voters across Maine how sick they are of Washington-style politics, where it seems more a game to be won than the life-and-death situation that government policy represents for so many people.

“Mainers are hungry. They’re scared. They’re struggling to keep a roof over their heads, they don’t know where the oil money is coming from, and they have medical bills piling up around their ears. All the while, the corporate-party candidates bicker about who’s going to spend more money on building warships in Bath.

“We deserve better. I did my very best to represent those Mainers who want politicians to listen to them instead of corporate sponsors, who want us to live up to those mythical American ideals of equal opportunity and a government of, by, and for the people. Tonight, it would appear I don’t have the first-choice votes to come out on top. My only regret is that I couldn’t have done more and rewarded our amazing campaign staffers, volunteers, and thousands of supporters with a victory.

“History is in the offing. Let it be known that the time of ‘spoilers’ and ‘lesser evils’ is over. We are now in the time of coalition building and a new politics. Here’s to a ranked-choice future.

“Finally, thank you to everyone who ranked me first. And it’s a lot of you, some 40,000 Mainers strong. We are not some radical fringe element. We are a growing movement that has agreed to value people, planet, and peace over profit -- and there are more of us every day. Thank you for helping us find each other through this campaign. Now that we’re together, there’s nothing we cannot do. Deep gratitude to all of you, and I’m looking forward to what comes next.”