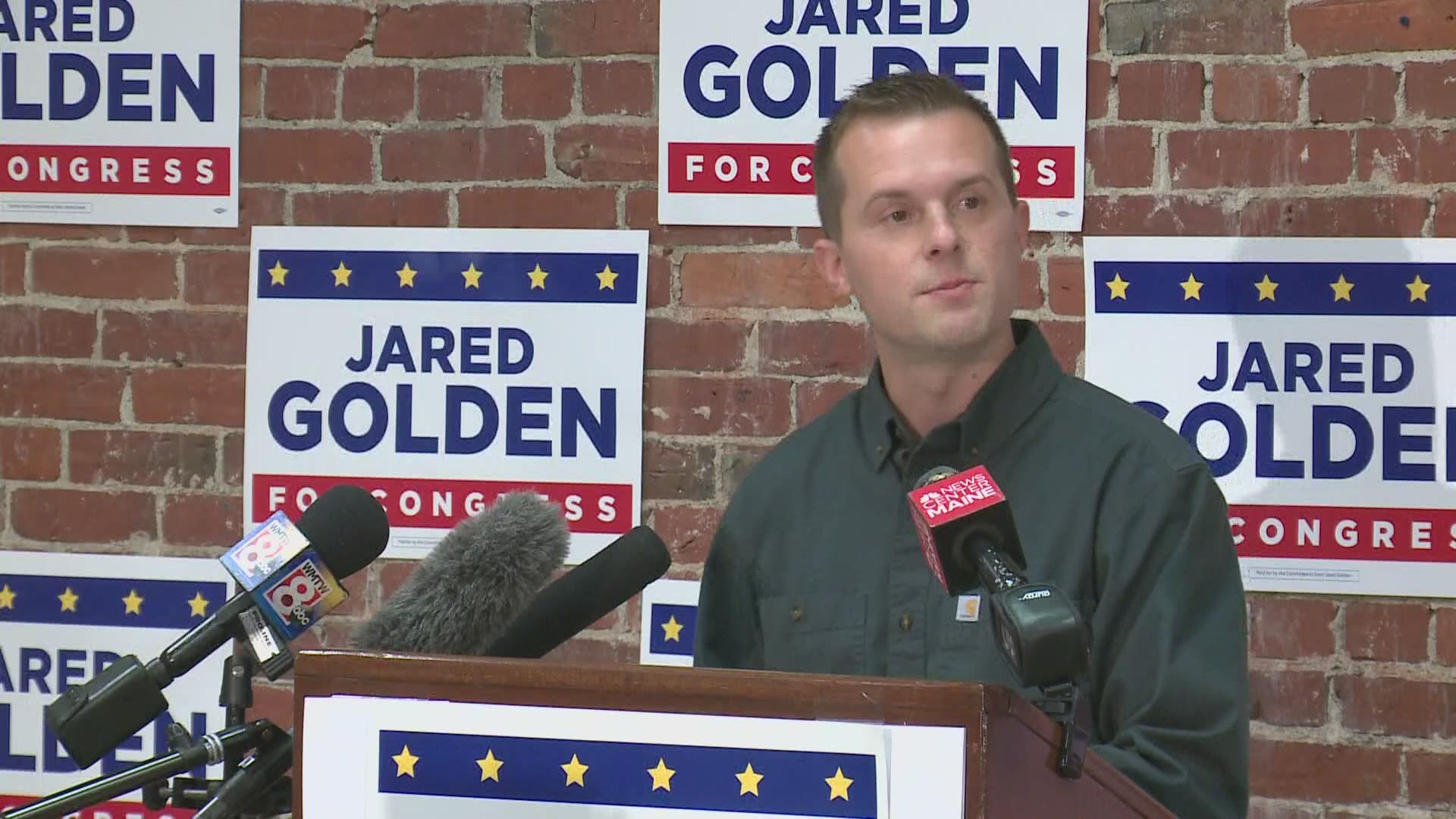 Golden says he will make an announcement in Lewiston at 1:30 p.m.

2 AM UPDATE: The Golden for Congress campaign released a statement early Wednesday morning following election returns with 80 percent of precincts reporting. While the race has not yet been called, Golden is leading by more than six percent of the vote with Bangor results still to be reported.

“This race is all but over — we are up by 6 points, and as our opponent acknowledged earlier this evening, our numbers are looking good,” said Margaret Reynolds, campaign manager. “We are still waiting on results from Bangor, which we expect will further grow our margin. However, it would be in poor form to declare victory before those results have been tabulated. We’re proud of the positive, honest campaign we ran and we’re grateful that Mainers saw it the same way.”

1 AM Update: Both incumbent Congressman Jared Golden and challenger Dale Crafts are waiting for more numbers to come in before indicating where the race stands.

Golden's campaign told NEWS CENTER Maine's Hannah Dineen, "Congressman Golden will be staying upstairs here at the campaign headquarters in Lewiston until we have a clear picture of results."

Dale Crafts did come to the stage to give a short statement.

"‘This race is not looking good," Crafts told the small crew. He followed that up by saying he is NOT conceding the race. His campaign told NEWS CENTER Maine's Zach Blanchard that he is waiting for final results from Bangor.

CD-2 has seen a lot of national attention because of its one Electoral College vote in the presidential election. Multiple visits by the Trump campaign over the past few months have included President Donald Trump, Vice President Mike Pence, and Trump's sons, Donald Trump Jr. and Eric Trump. The president has endorsed Crafts, tweeting on Aug. 1 that Crafts has "his complete and total endorsement."

Golden has received notable endorsements as well, including Independent Maine Sen. Angus King. This is Golden's first time seeking re-election to the seat, which he has held since 2018.

Who is Jared Golden?

Jared Golden, 38, was born in Lewiston and grew up in Leeds. After enlisting as an infantryman in the Marines, he deployed to Iraq and Afghanistan before returning home to Maine to attend Bates College, where he studied history and politics.

Golden's first job in politics was in 2011, when he worked for Sen. Susan Collins, a Republican. He was then elected as a Democrat to represent Lewiston in the Maine House of Representatives in 2014. In 2016, he was chosen by his peers to serve as the Democratic Assistant Majority Leader.

In 2018, Golden defeated incumbent Republican Congressman Bruce Poliquin in a race that was decided by ranked-choice voting. It was the first time in U.S. history that the process was used to decide a congressional election.

Who is Dale Crafts?

Dale Crafts, 61, was born in Fort Lauderdale, FL but grew up in Lisbon, ME. In 1983, while riding his motorcycle, he was paralyzed in a collision with a car.

"I was going down the road, came over a rise in the road, an elderly man was coming, he started turning in front of me -- it's not his fault, he didn't see me -- and I got over on the side of the road," Crafts told NEWS CENTER Maine in October. "I got by him but I couldn't get back on the road and my bike went airborne."

That motorcycle accident left Crafts, then 24, paralyzed from the chest down.

Crafts touts his experience as a businessman, and lists the following experience on his website: