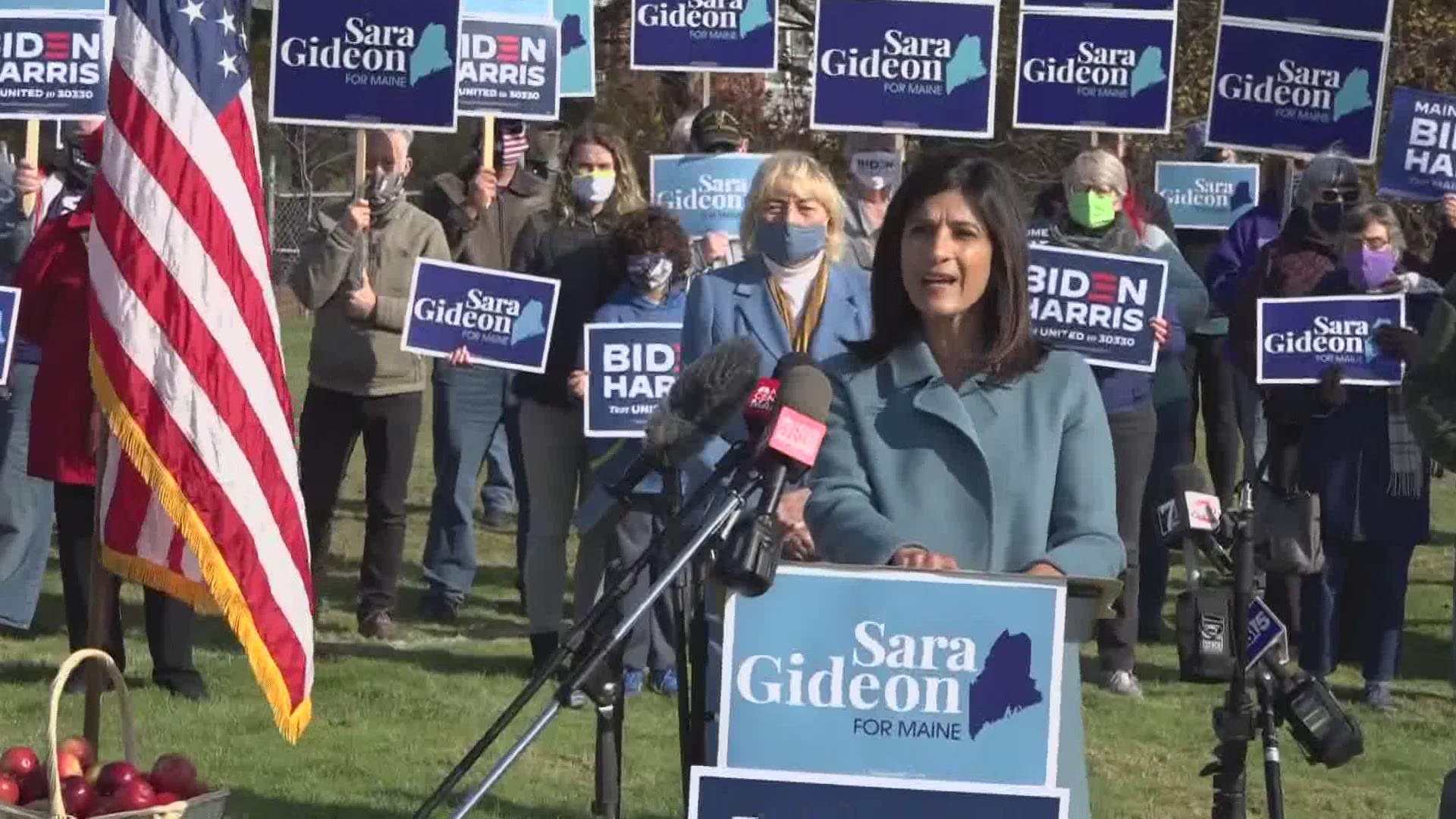 BANGOR, Maine — On Sunday afternoon, a few of Maine's most prominent Democrats held a press conference to send a message to Republicans near and far.

Democratic U.S. Senatorial candidate Sara Gideon expressed how Susan Collins has supported and has stood up for Trump and his priorities ahead of Mainers. "Senator Collins has voted with him 94% of the time," Gideon said.

Gideon said with nine days left until election day, it's time for new leadership. Gideon canceled the rest of her events Sunday to attend the last-minute press conference in Bangor.

"Donald Trump is here today, bringing his divisive campaign back to our state. Now the stakes in this election are clear. This president has sought to sow division. And to be clear, he has been enabled by this and emboldened in this by a Senate led by Mitch McConnell and supported by Susan Collins," Gideon said.

"Senator Collins may not want to be seen here today, but make no mistake over the past four years, she has chosen over and over again to stand for and stand up for Donald Trump and his priorities ahead of Mainers," Gideon said.

"Speaker Sara Gideon has said that she wakes up every day and tells herself that the most important job she has is defeating and replacing Susan Collins. Instead of doing her current job as Maine's Speaker of the House and working to help our state, Sara's top priority has long been getting a promotion for herself," Clark said.

"But Senator Collins’ focus remains solely on doing what’s right for the people of Maine, and how she can use her experience and seniority to get things done - no matter which party controls the Senate or the White House."

While Gideon continues to say Collins voted with Trump 94% of the time, Clark disputes that number.

According to the political tracking site FiveThirtyEight, Collins votes with Trump 67.5% of the time.

Mills says she completely supports Gideon in the Senate race.

However, most of Mills' remarks focused on how Trump decided to make a 'last-gasp' stop in Maine. "He finally discovered the state of Maine and he is trying to discover the second congressional district," Mills said.

Mills expressed Trump has not 'turned the corner' on the coronavirus pandemic.

"More people than ever before are dying from this virus," Mills said. "[President Trump] has miserably failed to get this pandemic under control and [the United States] has the worst record of any country when it comes to handling the pandemic," Mills said.

Mills added the different political gaps have widened in the last three and a half years.

We will LIVE stream their remarks on our #NEWSCENTERmaine website and Facebook page. The press conference will start soon. pic.twitter.com/LxiDIob0l8

Health care and prescription drugs were also a topic both Gideon and Mills.

"We support Joe Biden because he supports health insurance, health care, small businesses, he supports our veterans, your healthcare is on the ballot," Mills said.

All three speakers are pushing people to the polls to vote on Nov. 3 and support Joe Biden for president.

Frey said he felt privileged to share the microphone with both Gideon and Mills on Sunday at the press conference. He also added he fully supports Gideon.

Frey reminded everyone of his role.

He told the crowd his job is to make sure he focuses on the citizens' interests and makes sure that at a federal level, the policies established help keep, for example, the air clean, and the citizens and streets safe.

"I work to make sure that an administration incapable of doing that is held responsible," Frey said.

Frey says he had to sue U.S. Postal Service to make sure the mail was going to be delivered in a timely fashion. "And we did win and we held the Trump Administration accountable in that way," Frey said.

"That is your ballot, that is my ballot, those are ballots across the state of Maine," Frey said.

Mills ended the press conference criticizing the Senate Republicans and Trump for their handling of healthcare issues.

"Mitch McConnell is not of that ilk. He does not support Healthcare. He's made every effort to tear down the Affordable Care Act while he and Donald Trump have made noises about protecting people with pre-existing conditions. They've done nothing zero to protect any of us," Mills said. "And so many people in Maine do have underlying conditions that make us vulnerable to the next epidemic of to the next health care crisis."

"Financially medically vulnerable and this President and Mitch McConnell during his leadership in the Senate have done nothing except try to turn back the clocks try to take Healthcare away from people," Mills said. "That's a rural Maine issue."