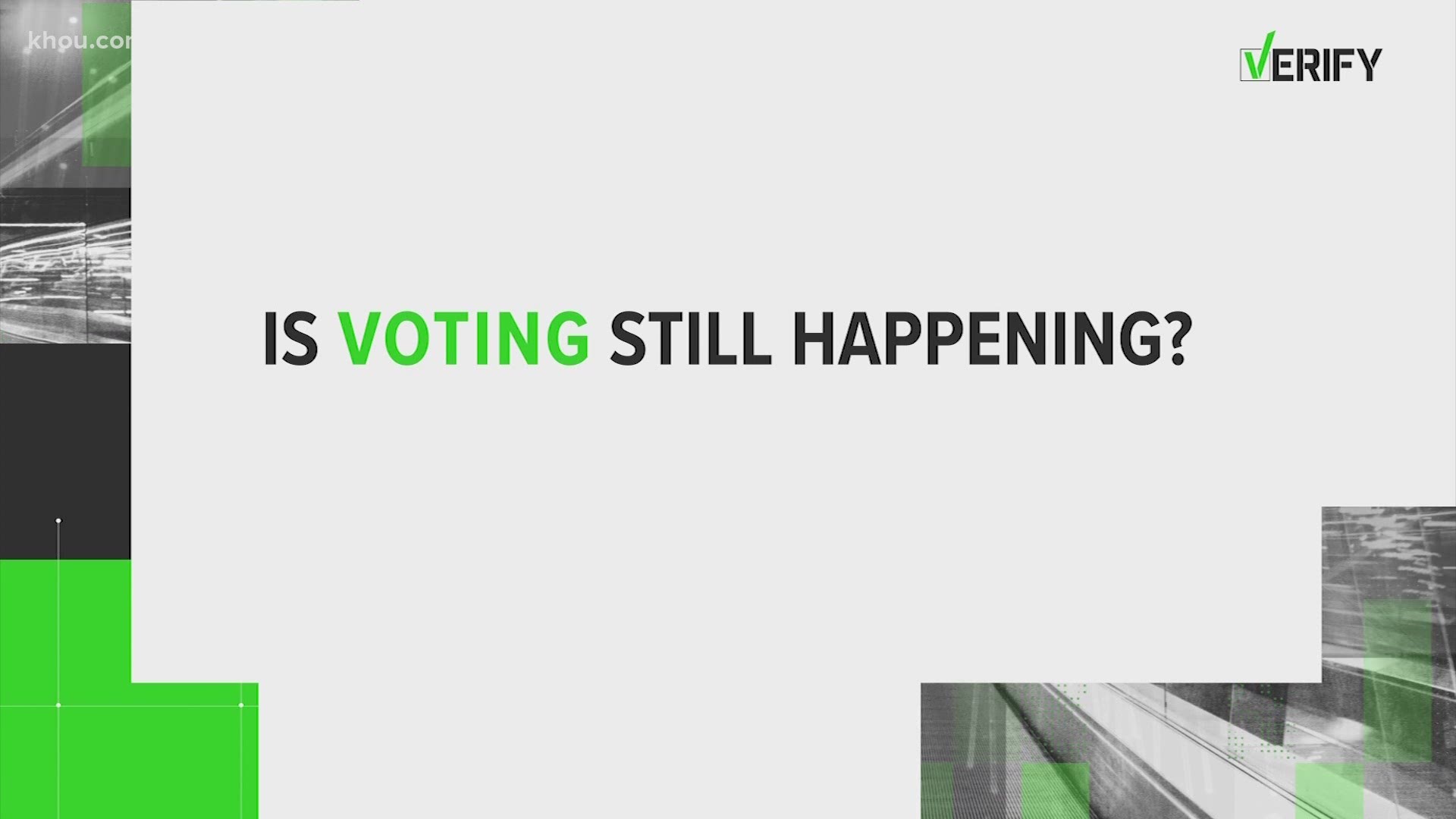 Golden says he will make an announcement in Lewiston at 1:30 p.m.

With 92% of the votes counted, Susan Collins leads with 51% of the vote, according to the AP. Sara Gideon trails at 42%.

Collins says she will deliver remarks at 1 p.m. from the Team Collins headquarters at the Hilton Garden Inn in Bangor.

The results are in from Lisbon:

The results are in from Bangor:

The Golden for Congress campaign released a statement early Wednesday morning following election returns with 80 percent of precincts reporting. While the race has not yet been called, Golden is leading by more than six percent of the vote with Bangor results still to be reported.

“This race is all but over — we are up by 6 points, and as our opponent acknowledged earlier this evening, our numbers are looking good,” said Margaret Reynolds, campaign manager. “We are still waiting on results from Bangor, which we expect will further grow our margin. However, it would be in poor form to declare victory before those results have been tabulated. We’re proud of the positive, honest campaign we ran and we’re grateful that Mainers saw it the same way.”

Republican Jay Allen conceded the 1st Congressional District race to Democratic Rep. Chellie Pingree, giving Pingree the win in her re-election bid with 60 percent of the vote. As of 12:30 a.m. Wednesday, 76 percent of results were reported.

“An unprecedented number of Mainers cast their ballots in this year’s U.S. Senate race, and from the Mainers who cast their ballots to the volunteers at the polls, we are so grateful to everyone who participated in this crucial election. It’s clear this race will not be called tonight and we are prepared to see it through to the finish. Over the coming days, we will make sure that every Mainer has their voice heard in this election.”

Mainers and candidates are waiting for results to finalize in the state, with about 50 percent reporting.

Sen. Susan Collins spoke to a crowd of her supporters outside her campaign headquarters in Bangor, where she thanked her friends, family, campaign staff, and Mainers for their continued support this election.

"It's because this is the state where my family lives, where my friends live, where my neighbors are," Collins said. "And I feel so fortunate to have been born and raised in this state and to have so many good friends who have worked so hard for me."

Republican candidate for Maine's 2nd Congressional District Dale Crafts spoke just before midnight in Lewiston. Crafts said, "This race is not looking good," but he is not conceding and he and the campaign wait for final results from Bangor.

NOW: @DaleCraftsME ‘This race is not looking good.’ But he is NOT conceding. His campaign is waiting final results from Bangor. #NEWSCENTERmaine #VoiceOfTheVoter pic.twitter.com/pRzbI5ulA8

The Golden campaign says Golden, meanwhile, will be not be speaking until more results are in.

At midnight, with about 60% of precincts reporting, Jared Golden has a lead over Dale Crafts, 53% to 47%. The Golden campaign says Congressman Golden will be staying upstairs here at the campaign headquarters in Lewiston until we have a clear picture of results. @newscentermaine pic.twitter.com/5aM7RBJrcq

After months of intense campaigning by candidates both local and national, it all comes down to this.

States will begin to report results as polls close on election night. However, given the large surge in mail-in voting due to the coronavirus pandemic, there's a chance it could take some time to know the winner of the presidential election. That's because mail ballots generally require more time to process than those cast in-person.

Maine voters will elect a U.S. Senator in the race between incumbent Senator Susan Collins and Maine Speaker of the House Sara Gideon, along with Independents Lisa Savage and Max Linn.

The race for Maine's U.S. Senate is a tight one. Monday, Republican incumbent Susan Collins and Democratic challenger Sara Gideon hit the campaign trail with just hours left in the campaign.

The Collins - Gideon race has been one of the most expensive senatorial races the country has ever seen. Some estimate that well over $100 million will be spent by the time Election day arrives.

Maine voters will also elect two candidates to the U.S. House of Representatives. In Maine's 1st Congressional District, it will either be incumbent Democratic Rep. Chellie Pingree or Republican challenger Jay Allen.

In Maine's 2nd Congressional District, it will either be incumbent Democratic Rep. Jared Golden or Republican challenger Dale Crafts.

Republican President Donald Trump is seeking a second term in office, while his Democratic challenger, former Vice President Joe Biden, also hopes to gain enough electoral votes to win the White House. In order to win the U.S. presidential election, a candidate must win in enough states to have 270 Electoral College votes.

The candidates are seeking to lead a nation at a crossroads, gripped by a historic pandemic that is raging anew in nearly every corner of the country and a reckoning over race. The election caps an extraordinary year that began with Trump’s impeachment, the near-collapse of Biden’s candidacy during the crowded Democratic primary, and then was fully reshaped by the coronavirus outbreak.

Who is Susan Collins?

Susan Collins, who turns 68 years old on December 7, has represented Maine as its United States Senator since 1997.

After graduation, Collins had a string of high profile political positions in Maine and Washington. Some of the highlights were:

Collins lives in Bangor with her husband, Thomas Daffron.

Who is Sara Gideon?

Gideon moved to Freeport, Maine in 2004, with her husband, Ben Gideon.

Gideon's political career began on the Freeport town council in 2009. From there, she was elected to the Maine House in both 2012, 2014 and 2016. In the latter election, she was picked to be the assistant majority leader of the Maine House of Representatives.

In 2016 and 2018, Gideon was elected Speaker of the House. Gideon made a name for herself by tackling some tough subjects like Medicaid expansion and the availability of Narcan to Maine people. Gideon had some success battling with then-Republican Governor Paul LePage.

Gideon still lives in Freeport with her husband and their three children.

Who is Lisa Savage?

Lisa Savage, 64, was born in Bangor but grew up in California. She returned to Maine to attend Bowdoin College, where she graduated with a history degree in May of 1977.

She returned to Maine for good a few years later to run her father's bar, Bloomfields, in Skowhegan.

Savage returned to school at the University of Southern Maine and earned a masters degree in teaching, where she has worked for the last 25 years. While Savage hasn't held an elected political position, she was elected to serve as vice president and chief negotiator of RSU 18's teachers' union for six years.

While Savage didn't hold office, she has been politically active over the years.

Savage has been a big proponent of the Green New Deal, saying, "Maine can lead the way in providing Green New Deal infrastructure for the Northeast and beyond, building green solutions to the climate crisis - like commuter trains, solar panels, and offshore wind towers - rather than wasting billions on unnecessary, polluting warships that make the climate crisis worse.

This conversion would create thousands of more jobs in Maine, jobs with good wages and benefits that won't just disappear when the Pentagon decides its latest destroyer is obsolete."

Savage lives in Solon with her husband, Mark Roman. They have five grown children and four grandchildren.

Who is Max Linn?

Max Linn was born in St. Petersburg, Florida, in September of 1959. As he grew up, he set his sights on the financial world. He graduated from two colleges with degrees in financial planning. Over the last 35 years, Linn created, ran, and sold one of the country's largest independent financial planning firms.

Linn dabbled in politics in Florida, where he ran for Congress as a Democrat and for Governor in the Reform Party.

Linn retired to Bar Harbor about 12 years ago.

Mainers first heard of Linn in 2018 when he tried to run for U.S. Senate as a Republican, but the Secretary of State ruled a number of Linn’s petition signatures were invalid, and he failed to qualify for the primary ballot.

This year, he’s running as an independent and survived another petition signature challenge to qualify for the ballot.

Who is Chellie Pingree?

Pingree has served as the U.S. Representative for Maine's 1st Congressional District since 2009. Before serving in Congress, Pingree was a Maine State Senator and was the Senate Majority Leader from 1996-2000. She unsuccessfully ran for U.S. Senate in 2002.

Pingree has lived in North Haven, Maine, since she was a teenager. She has a background in organic farming and has also started two small businesses. She has three children.

Pingree got involved in politics after serving as North Haven's town tax collector and later became the chairwoman of the local school board, eventually leading her to the State Senate in the 90s.

In 2008 she was elected to Congress; that year, Maine became the first state in American history to have a majority female Congressional delegation.

Who is Jay Allen?

Republican Jay Allen is a political newcomer. Allen is facing tough odds against Pingree, but he says his vow to protect the values of liberty and freedom at all costs is what led him to take on the challenge.

Allen is a former Army doctor and father of six. He served for nearly 25 years, including most recently in Afghanistan in 2006. He has lived all over the world before finding a home in Maine upon leaving the service.

Allen is a self-described "Trump conservative" and has the support of prominent Maine Republicans like former Congressman Bruce Poliquin and former Governor Paul LePage.

On the issues, he is adamant about personal liberties, lower taxes, and protecting the Second Amendment.

Who is Jared Golden?

Jared Golden, 38, was born in Lewiston and grew up in Leeds. After enlisting as an infantryman in the Marines, he deployed to Iraq and Afghanistan before returning home to Maine to attend Bates College, where he studied history and politics.

Golden's first job in politics was in 2011, when he worked for Sen. Susan Collins, a Republican. He was then elected as a Democrat to represent Lewiston in the Maine House of Representatives in 2014. In 2016, he was chosen by his peers to serve as the Democratic Assistant Majority Leader.

In 2018, Golden defeated incumbent Republican Congressman Bruce Poliquin in a race that was decided by ranked-choice voting. It was the first time in U.S. history that the process was used to decide a congressional election.

Who is Dale Crafts?

Dale Crafts, 61, was born in Fort Lauderdale, FL but grew up in Lisbon, ME. In 1983, while riding his motorcycle, he was paralyzed in a collision with a car.

"I was going down the road, came over a rise in the road, an elderly man was coming, he started turning in front of me -- it's not his fault, he didn't see me -- and I got over on the side of the road," Crafts told NEWS CENTER Maine in October. "I got by him but I couldn't get back on the road and my bike went airborne."

That motorcycle accident left Crafts, then 24, paralyzed from the chest down.

Crafts touts his experience as a businessman, and lists the following experience on his website: