Trump: 'She's like a dictator' Talks shift to Mills and reopening Maine amid roundtable in Bangor 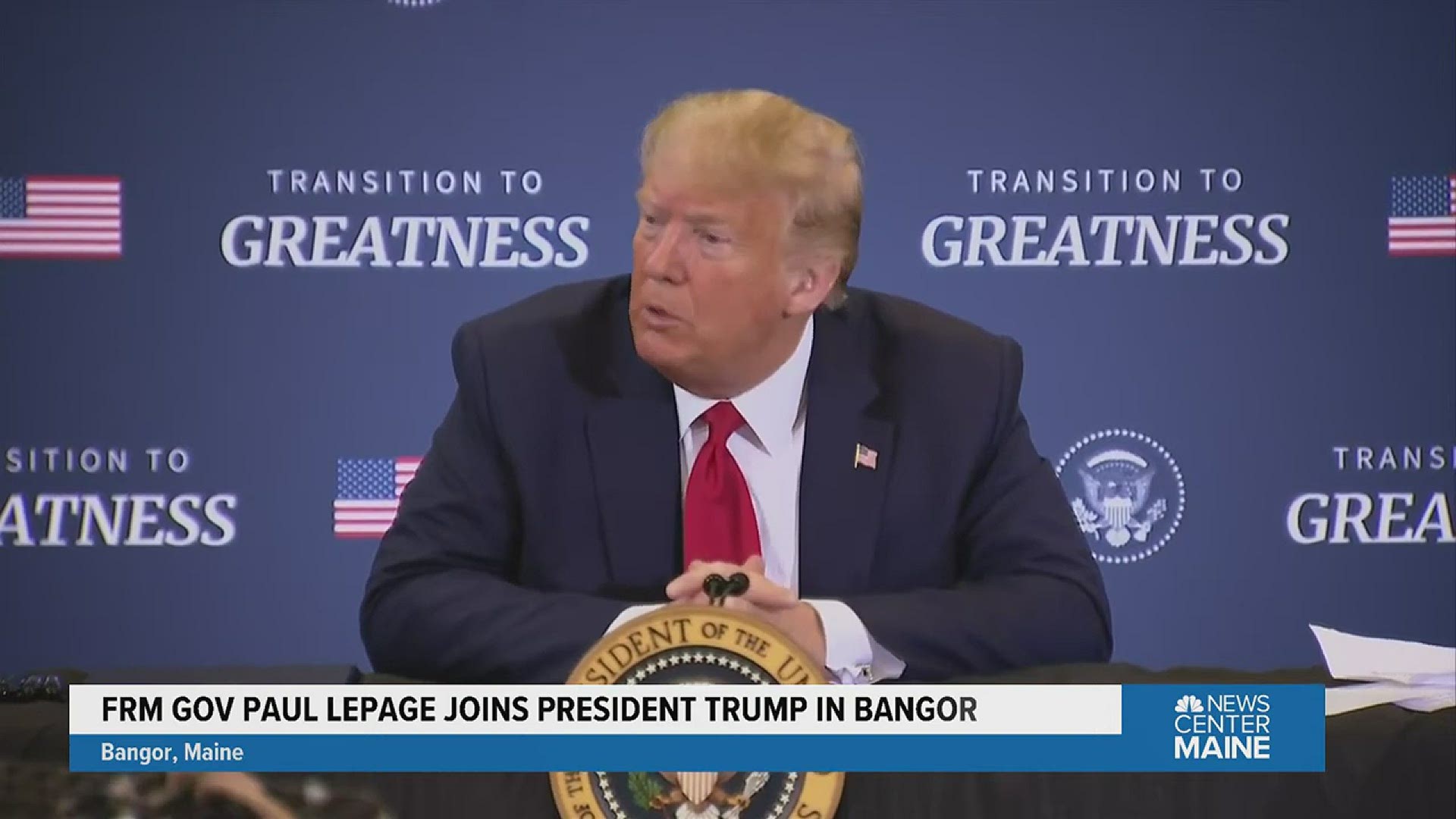 BANGOR, Maine — President Donald Trump met with Maine fishing industry leaders shortly after he arrived in Bangor on Friday. The focus of the discussion was the new action Trump would be taking to allow commercial fishing at a marine conservation area off the coast, but more was talked about at the meeting, including criticism of Gov. Janet Mills.

Former Gov. Paul LePage, who greeted the President when he landed at the Bangor International Airport around 2 p.m., initiated the talks about where Maine is on reopening, saying Maine is "still tied up pretty tight because we have a Governor who is not reopening very fast."

Trump immediately jumped in, saying "Why isn't your Governor reopening your state?"

"You have a Governor that doesn't know what she's doing, and she's like a dictator," Trump continued.

Tensions between Trump and Mills have been building throughout the week leading up to Trump's visit.

While on a call with governors across the country to discuss the response to protests in the wake of George Floyd's death earlier this week, Mills urged the President not to come to Maine, saying his visit could create "unrest" across the state.

Later in the call Trump said Mills' warning not to visit Maine may convince him to push forward with the trip, saying "She tried to talk me out of it. Now I think she probably talked me into it. She just doesn’t understand me very well. But that’s okay.”

On Thursday, Mills said, "I again ask the President to check his inflammatory rhetoric at the door and abandon the divisive language that sows seeds of distrust among our people."

Mills has been criticized by many Republicans and business owners across the state for not reopening the Maine economy sooner amid the coronavirus pandemic.

LePage also told Trump Mills is allowing people to continue to collect unemployment, including the additional $600 a week made possible by the Pandemic Unemployment Assistance program, so people aren't going back to work.

"So, she's taking advantage of the system, she's not letting them come back anyway, 'cause you're shutdown," Trump said. "That's right," LePage responded.

RELATED: Protesters in Bangor demand full opening of state amid the coronavirus

Maine entered Stage 2 of Mills' plan to reopen the state on June 1, which allowed restaurants and retail stores to reopen, except for dine-in service in Maine's most populated counties, Cumberland, York, and Androscoggin. Stage 3 is set to begin in July and August.

LePage said the plan is harming Maine's tourism economy, which it relies heavily on.

Later when Trump spoke to workers at the Puritan Medical Supplies facility in Guilford, he again commented on Mills' reopening plan.

"When are you gonna open your state up?" Trump said, "...you have a governor that won't up your state up, what's she doing?"

"You oughta get the state open, Governor."

Watch Trump's full speech at Puritan here. His comments about reopening Maine can be found near the 35-minute mark:

Mills issued a statement in response to Trump's comments and visit to Maine, and said she doesn't "care what the President says about me."

RELATED: 'I don't care what the President says about me': Gov. Mills responds to Trump's visit and comments

Yesterday, I asked the President to check his rhetoric at the door and to lead us with courage and compassion through this difficult time. Sadly, but unsurprisingly, he continues to prove himself incapable of doing so.

I have spent the better part of my career listening to loud men talk tough to disguise their weakness. That’s what I heard today.

I don’t care what the President says about me. I care what he does for Maine people.

And that’s not very much.

At a time when Maine fishermen are badly hurting, the President had an opportunity to acknowledge and address their very real and significant concerns – many of which are the direct result of his Administration’s harmful policies.

Rolling back a national monument 35 miles southeast of Cape Cod – one that is currently open to commercial fishing according to NOAA – is not going to help the vast majority of Maine fishermen feed their families. It will not help them pay their mortgage or rent. It will not support an industry that is struggling under the massive weight of an unprecedented pandemic and misguided Federal policies.

What Maine fishermen need from this President is a better trade policy from his Administration, not misguided plans for retaliatory tariffs which have been shown to do more harm than good. They also need more Federal financial support, as I requested months ago.

The President’s absolute lack of any leadership whatsoever during this pandemic has only hurt, not helped, Maine.

Mr. President, I do not take advice from someone whose failed leadership and lack of preparedness has contributed to the deaths of more than 100,000 Americans, including nearly 100 here in Maine.

Maine CDC reported today that three more people have died in our state and thirty-six more were infected. That may seem like a low number compared to other states. Our numbers are comparatively low precisely because of the actions we have taken.

When I entered office and far before we knew there was a pandemic on the horizon, I rebuilt Maine’s public health system which was decimated under the previous administration. I hired some of the most qualified and highly respected public health professionals to rebuild our healthcare system. I paid off the previous administration’s debt to the federal government, and I saved millions in the Rainy Day Fund to bring it to a record high. I created an economic development plan to strengthen our economy for the first time in more than twenty years, and I brought Republicans, Democrats, Greens and Independents together to restore civility and normalcy in our state.

When the pandemic hit, I, along with my fellow governors, pleaded with the Administration for months for Personal Protective Equipment to protect our frontline workers and for testing supplies so that we could prevent the spread of the virus and begin to loosen restrictions on our struggling businesses. With no vaccine, physical distancing was our only tool to prevent Maine from becoming a hotspot like our neighboring state of Massachusetts.

The President told us to find it ourselves. So we did. Maine more than tripled our testing capacity through our agreement with Maine’s own IDEXX so that anyone suspected of having COVID-19 can be tested in Maine if their doctor thinks it’s appropriate, which allowed us to move into the first phase of our reopening before many of our fellow states.

Since then, with public health data showing that the vast majority of COVID-19 cases in our state are occurring in our southern most populous counties, we have almost fully opened thirteen of Maine’s sixteen counties. In fact, Maine was the first New England state to allow indoor dining at restaurants. And just yesterday, we accelerated the openings of more businesses in thirteen of our sixteen counties.

And my Administration is preparing to unveil next week our final plan for tourism because the best thing we can do for Maine businesses is create a system that will instill a sense of safety and consumer confidence for the public, for staff, and for travelers to want to come here.

Finally, contrary to some outlandish, partisan allegations, the State of Maine fully encourages unemployed individuals to return to work, and if the President is unhappy with the $600 per week PUA benefit, then he should look in the mirror at who signed into it into law.