"While I support prompt additional funding... it seems premature to be considering a package of this size and scope." Collins points to recent $900 billion package. 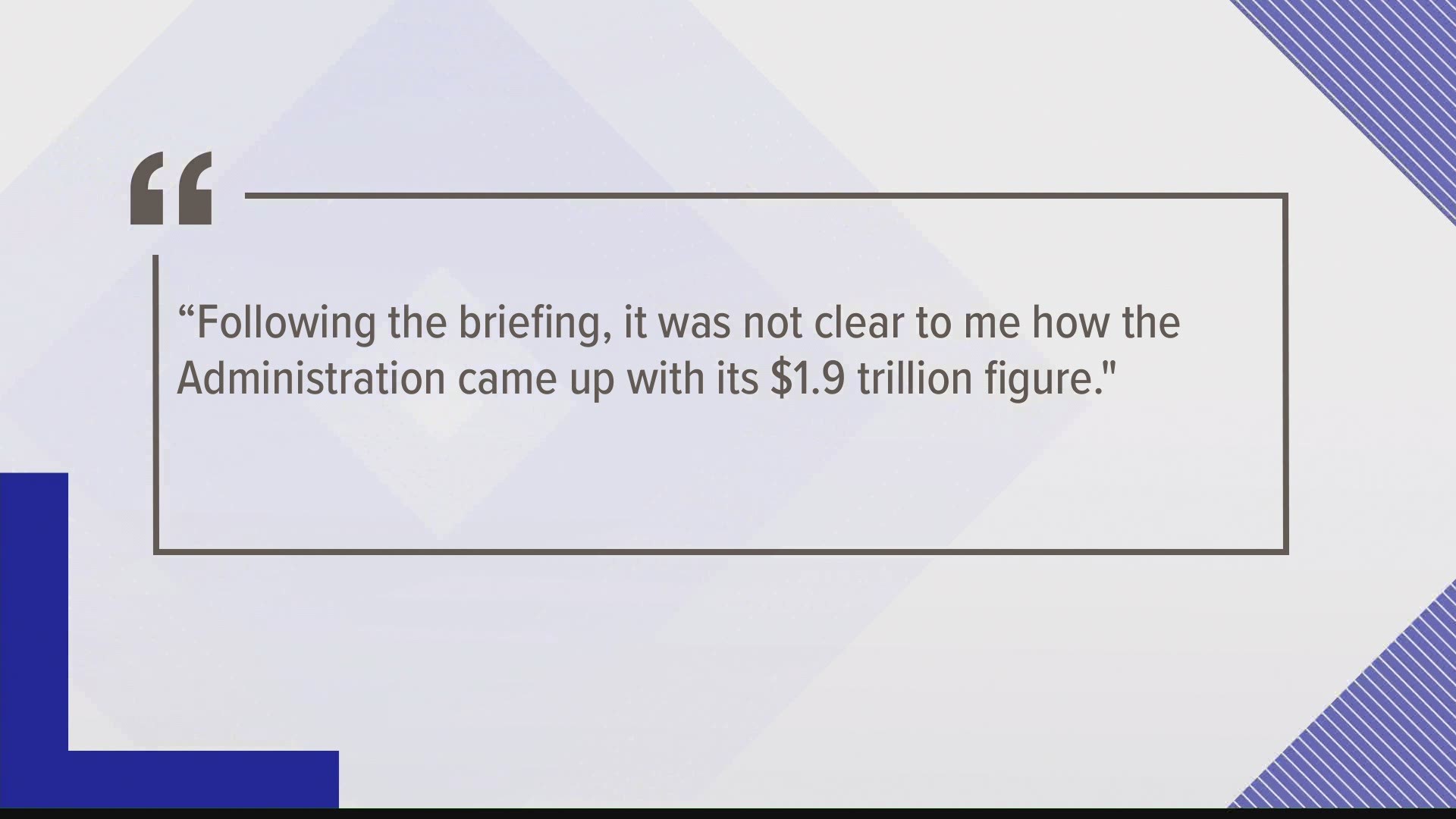 WASHINGTON D.C., DC — On Sunday, top Biden officials and a bipartisan group of U.S. Senators joined together over a call to discuss the Biden administration's proposed $1.9 trillion COVID-19 relief package.

Both of Maine's Senators Susan Collins and Angus King were on the call.

Collins' communications team tells us she led the call along with Sen. Joe Manchin, a Democrat from West Virginia.

"Senators Collins and Manchin are the co-leaders of the bipartisan, bicameral group that spearheaded the $900 billion COVID-19 relief bill that was signed into law last month," Communications Director Annie Clark says in a Sunday evening release.

In a statement, Collins explains why she does not yet approve of the Biden administration's proposed $1.9 trillion relief package:

“While I support prompt additional funding for vaccine production, distribution, and vaccinators, and for testing, it seems premature to be considering a package of this size and scope.

“Less than a month ago, President Trump signed into law a $900 billion COVID relief package that our bipartisan group played a key role in negotiating.  This funding is in addition to the nearly $4 trillion that Congress had provided previously for COVID relief. It appears that approximately $1.8 trillion of that money has yet to be spent.

“Following the briefing, it was not clear to me how the Administration came up with its $1.9 trillion figure.

“There was widespread agreement that additional funding is needed for vaccine distribution, and I mentioned my concern that rural hospitals require more assistance in this regard. I also raised the issue that the additional stimulus checks are not well-targeted to those who would need them most. For example, under the proposal, a family of five with an income of over $325,000 would still receive a partial check even if they have been unaffected financially by the pandemic.

“Moving forward, I want our bipartisan, bicameral group to get together to determine if we can come up with a more targeted package that would address unmet needs that we are experiencing now as we fight this persistent pandemic.”

Today’s call between the White House and members of Congress was a bipartisan discussion focused on policy solutions – which is notable in itself. Let's keep working together to speed vaccine distribution and support Americans during this pandemic. https://t.co/E19gh16nvs

King also issued a statement following the call on Sunday evening as well. He did not specifically touch on the proposed $1.9 trillion price tag. King says:

“Today’s meeting was a cordial, bipartisan conversation focused on identifying the best policies to support the American people during this crisis – which is notable and important on its own."

“I was pleased that there was an absolute consensus on the need to accelerate the nation’s vaccination efforts and bolster our testing and tracing infrastructure. In the days ahead, we will continue to engage with the Administration in order to receive additional data, which will inform future vaccine distribution plans as well as any additional legislative action.

“Most importantly, people left politics out of the conversation and focused on the substance. In fact, if an outside observer was listening to this call, I don’t think they would have been able to identify the participants’ party affiliations. We’ve got a ways to go, but this was a strong first step in the right direction.”