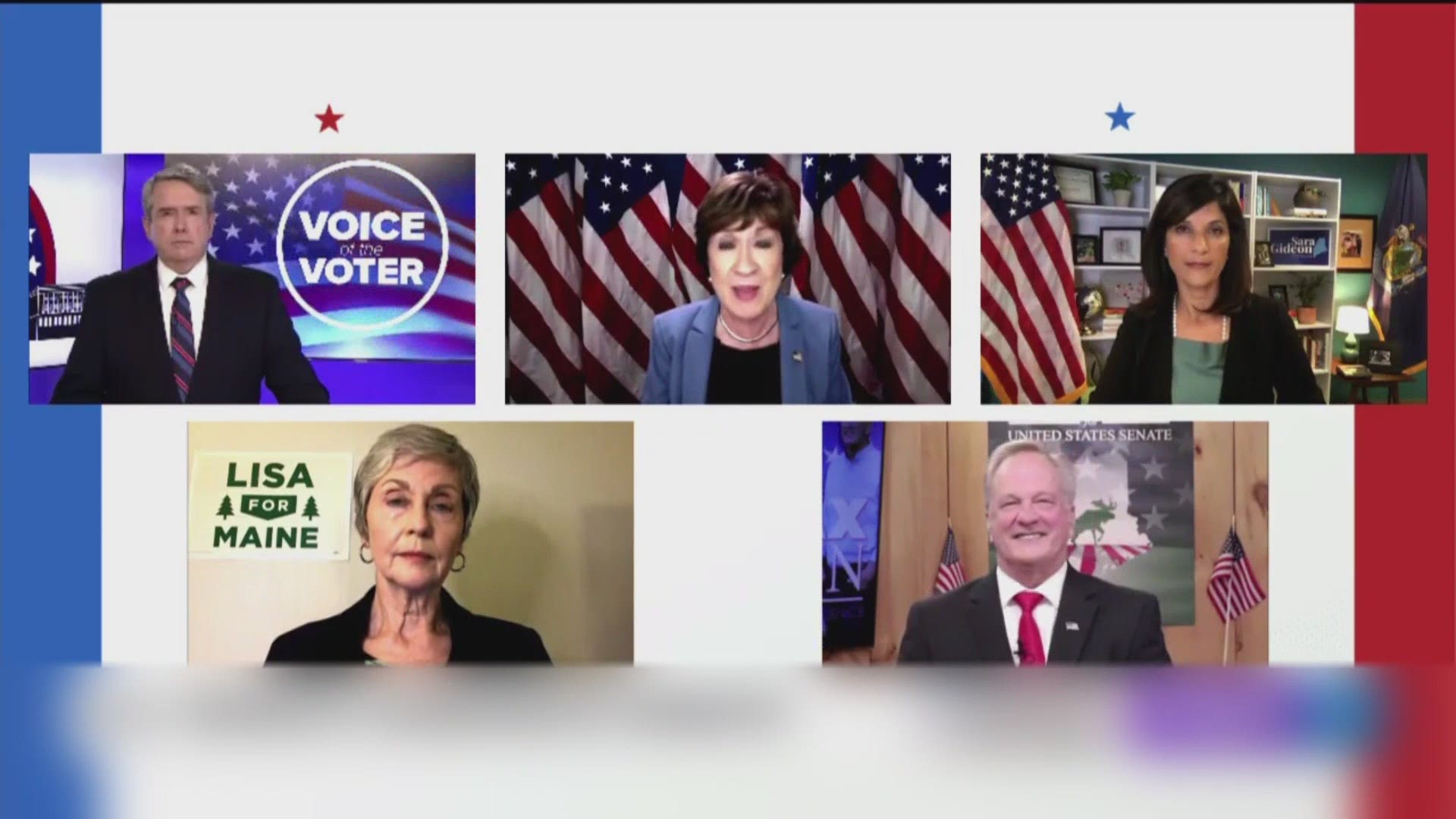 PORTLAND, Maine — For the fourth time this election cycle, the four candidates running for U.S. Senate in Maine faced off in a debate in the final stretch of the election. NEWS CENTER Maine hosted, in partnership with the Maine State Chamber of Commerce.

The debate featured Republican incumbent Sen. Susan Collins, Democratic challenger Sara Gideon, and Independents Lisa Savage and Max Linn. It was one of the last few opportunities to hear directly from candidates before the Nov. 3 election, which is just two weeks away.

Working with their parties, as well as across party lines

Collins said she disagrees with Senate Majority Leader Mitch McConnell's position on COVID-19 relief, saying she thinks it's important to pass a relief bill before the November 3 election.

"Obviously I am not going to agree with any leader all of the time but I don't hesitate to make my disagreements known," she said.

"Mitch McConnell will continue to be majority leader as long as Susan Collins is a senator," Gideon responded. "And that means all of the issues that we care about—whether it is healthcare, whether it is what happens with the judiciary—will be at risk."

Linn responded that Gideon can't represent Maine because she's "with a rigged system." He said he would caucus with whichever party is "the most for Maine."

"I can truly be independent in Washington. Senator Collins and Speaker Gideon cannot. They belong to a rigged, broken system," Linn added. "The core of me running in this race has been the American people and Mainers sick and tired of politics as usual in Washington D.C."

Savage said that if she wins the election, she plans to re-enroll in the Green Party and enter the Senate as the first Green senator. She said she will fight for Medicare for all and will work with anyone to make sure it happens.

"I will meet with, work with, collaborate with anyone who is interested in working on that project together," Savage said.

Will you contest the outcome of this election in court if you win plurality, but lose in the final ranked-choice result?

All four candidates said they would not contest the outcome of the election if they were to lose in the final ranked-choice result.

Gideon said she fully supports ranked-choice voting, adding that she's fought to protect it as a legislator against repeated attempts to repeal the law.

"I have full faith in our electoral system and how our voting will go, both through these weeks that voting has been open and on Election Day," Gideon said. "Unless there is some reason that is outstanding that shows that something has gone wrong, I would not plan to contest results. I would plan to accept them."

"If there's real malfeasance in the election, of course I would challenge it," Savage said. "But if ranked-choice voting does its job and expresses the will of the majority of Maine voters then of course I would respect that outcome."

"Ranked-choice voting has been upheld twice by the courts in Maine. Those are the rules that we have to play by," Collins answered.

.@SaraGideon and @SenSusanCollins find agreement on more federal infrastructure investment, including broadband in rural parts of the state. #NEWSCENTERmaine #VoiceOfTheVoter

Should college be free for all Americans and perhaps should it be linked to military or other public service?

"Since we are creating this debt and doing bailouts, I'm asking for student loan relief, which is a direct people bailout for over 45 million Americans," Linn said. "And of course for Mainers I'm saying we need money. I'm the only candidate saying we need five thousand dollars for every Maine family and this goes to them direct because Maine has been affected more than any other state in the country."

"What I think would be really worth pursuing is allowing students to refinance their debt. Given that interest rates are so low now, that would save them a great deal of money," Collins said. "But I don't think it makes sense to allow a very wealthy family that is sending a son or daughter to the University of Maine or any other public school to go for free. That would just burden the taxpayers when they can afford to pay."

"Money should not be a barrier to education. And also, debt should not be a barrier to young people being able to own their first home and get on their feet and afford health insurance. But today in America, it is. And that's why we do need to make changes. What I support are need-based grants that will help people gain a debt-free education. We've seen great examples of this helping here in Maine, both in our community college system and our university systems over the past years," Gideon said. "I also support making refinancing easier and basing that on both income level but also on the kind of work that you are doing. And I also think we need to make incentives in order for public universities and community colleges to lower the cost of education."

.@SaraGideon: ‘There is too much money in politics.’ Gideon has raised more the $63 million compared to @SenSusanCollins’ $25 million. #NEWSCENTERmaine #VoiceOfTheVoter

Savage said she believes we're decades behind the rest of the world in investing in public transport.

"Every time we have a war, nobody asks how we're going to pay for that," Savage added. "But when it's something like public transportation or Medicare for all suddenly 'how are we going to pay for it?' We have plenty of money in this country, we just need better budget priorities."

.@LisaForMaine says ‘for profit’ and ‘health care’ don’t belong in the same sentence, touts #Medicare4All. She is the only candidate to support that plan. @SaraGideon supports a ‘for all who want it’ type plan. #NEWSCENTERmaine #VoiceOfTheVoter

.@SaraGideon acknowledges @LisaForMaine for being a teacher and drawing attention to issues of climate change and health care. #NEWSCENTERmaine

.@LisaForMaine says she admires everyone participating in civil debate, being role models for kids. #NEWSCENTERmaine

.@SenSusanCollins: ‘I have been a leader on the biggest issues facing our nation...but it’s helping Mainers that keeps me going.” #NEWSCENTERmaine

.@SaraGideon uses time to thank those she’s met around the state over the campaign. Calls out all women by name. ‘This race is about you.’ #NEWSCENTERmaine

Republican National Committee statement after the conclusion of the debate:

Tonight once again showed the stark differences between Senator Susan Collins and Speaker Sara Gideon. While Susan Collins is hard at work in Washington delivering results for Maine, Gideon is campaigning, ignoring Mainers in their time of need. Maine deserves better than Sara Gideon’s absent leadership.

Maine Democratic Party statement after the conclusion of the debate:

From the beginning of this campaign, Senator Collins’ strategy has been grounded in obfuscating her real record on the issues that matter most to Maine people, and we saw her lean into that tactic tonight on the debate stage. Whether it’s lying about her votes to strip health care from more than 100,000 Mainers or refusing to be honest about her support for Donald Trump’s reelection, it’s clear that Collins has no interest in being honest or straightforward with voters.

Mainers deserve a Senator who isn’t afraid to answer tough questions and who will never stop fighting to make sure every Mainer has access to quality, affordable health care. Tonight, Speaker Sara Gideon showed us that she has the plans, the experience, and the vision to be a Senator that Mainers can be proud of.

TONIGHT: @SenSusanCollins and @SaraGideon will face off in our #VoiceOfTheVoter Debate. It was supposed to be in-person here in Portland, but is now happening virtually because Collins is in Washington. Gideon supporters turned out anyway. https://t.co/8htdKU5Atm #NEWSCENTERmaine pic.twitter.com/KQIAFEd51Q

Debate topics will likely include COVID-19 response and relief, health care, climate change, the Supreme Court, and racism, among others. As the incumbent, Collins' track record in the Senate over the past 24 years and her relationship with President Donald Trump are likely to be focuses of the debate, something that Gideon and Democrats have pressed her on for months.

The latest polls put Gideon ahead of Collins, but the race remains tight and contentious. While polling shows Savage and Linn aren’t in a position to win the race, ranked-choice voting will give them the opportunity to siphon votes away from the leading party’s candidates. Savage says using the ranked-choice method in the race is a “historic opportunity” for her campaign and will give Mainers “the freedom to vote their values, not their fears.”

In the previous three debates, Savage and Linn used the debate platform to reach a wider audience of voters and potentially sway ranked votes their way. Both candidates say they want to show Mainers there are other options besides the powerful parties' candidates.

The final presidential debate is set for 9 p.m. on Thursday.