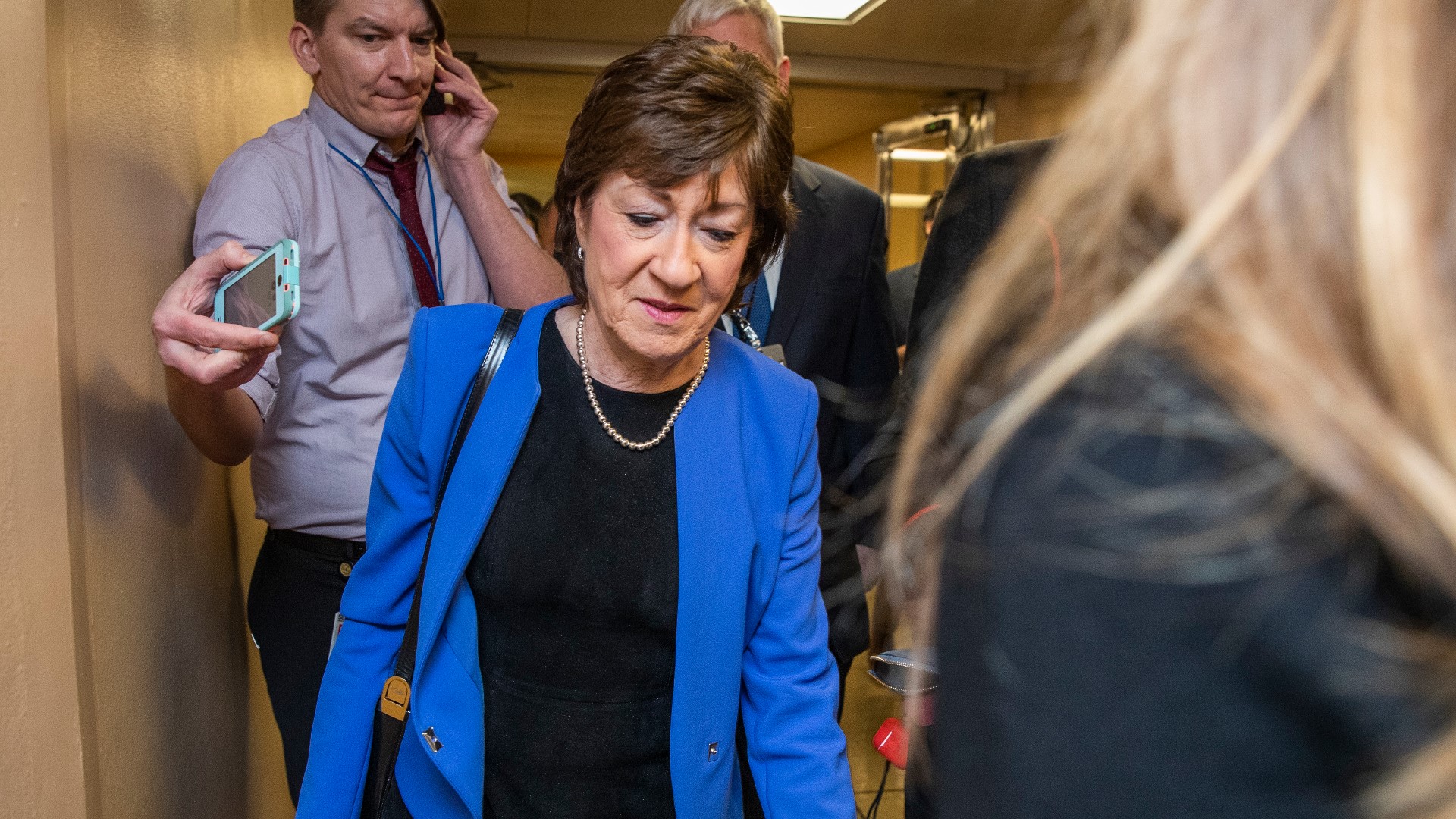 Maine Republican Sen. Susan Collins is facing further scrutiny ahead of a vote on whether or not to allow witnesses in the impeachment trial of Pres. Donald Trump. That vote is expected later this week.

RELATED: What's next in the impeachment trial? Senators get to ask questions silently

As the trial enters the questioning phase Wednesday, staffers at Collins' office are feeling pressure in the form of profanity-laced calls and voicemails targeting her.

According to a spokesperson, about one in every 25 calls is targeted, profanity-laced and border-line threatening.

Here are some of those voicemails obtained by NEWS CENTER Maine:

'What a vile piece of garbage.' 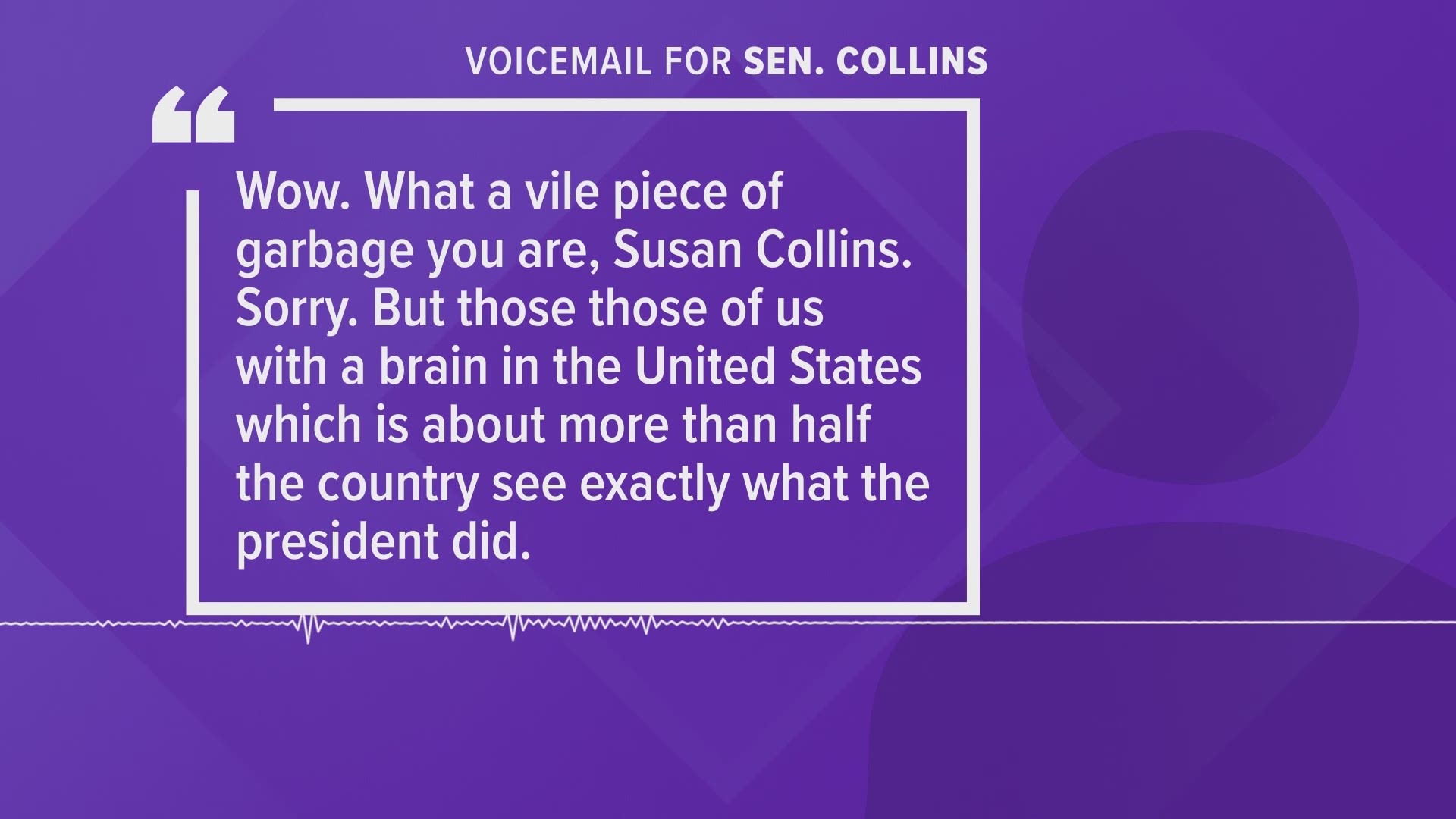 "Wow. What a vile piece of garbage you are, Susan Collins. Sorry. But those those of us with a brain in the United States which is about more than half the country see exactly what the president did. You’ve seen exactly what the president did. You know what he did, and you’re going to sit there and hold this—If you don’t have the guts and the integrity, I sure hope you didn’t breathe. I sure hope you don’t have children, because their future is f***ed. If you don’t vote to have witnesses in this trial for the most vile, vulgar, piece of s*** president that has ever existed to be removed, how dare you bring children into this world, and how dare you even breathe the air the rest of us breathe. You make me sick." 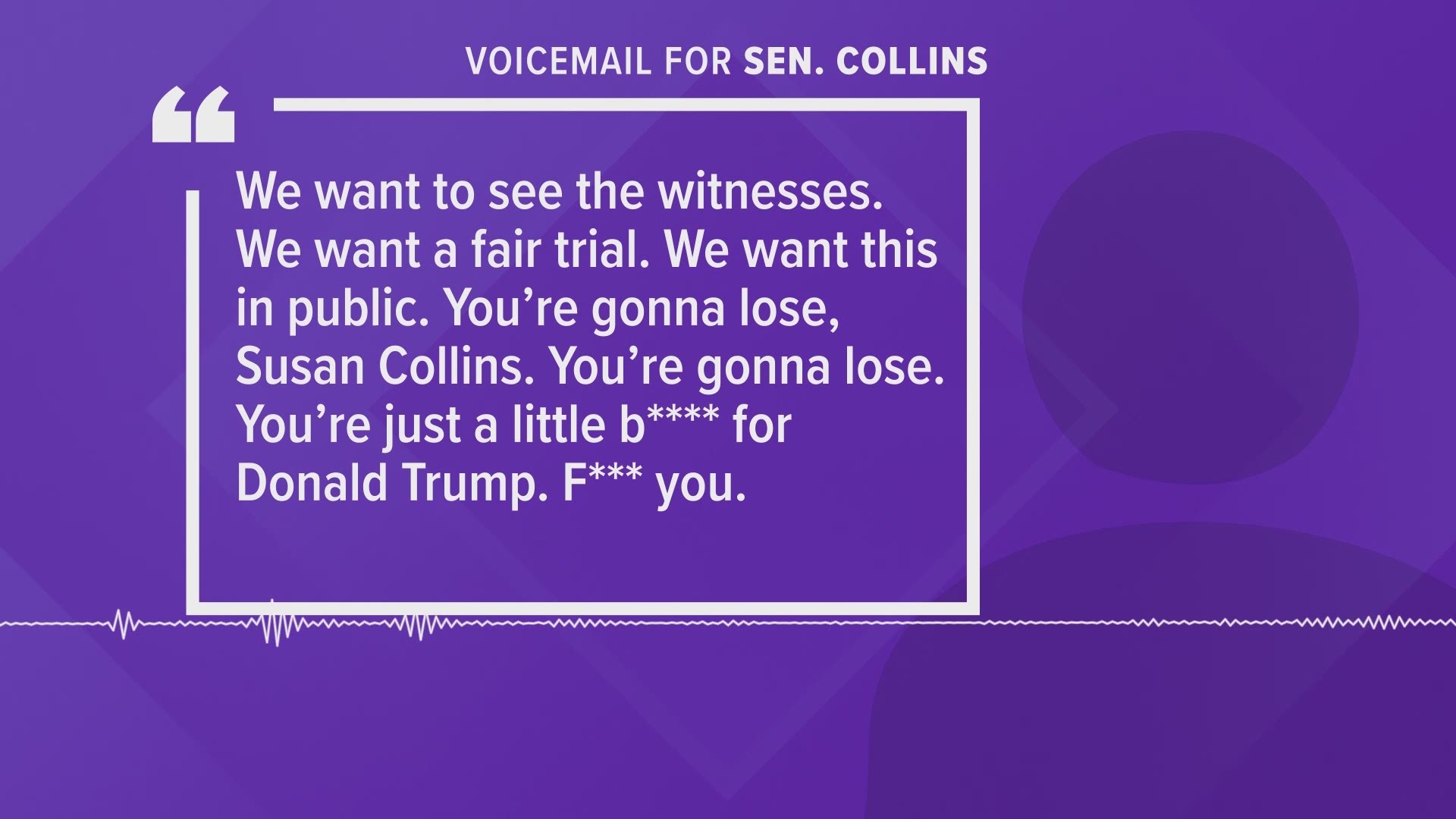 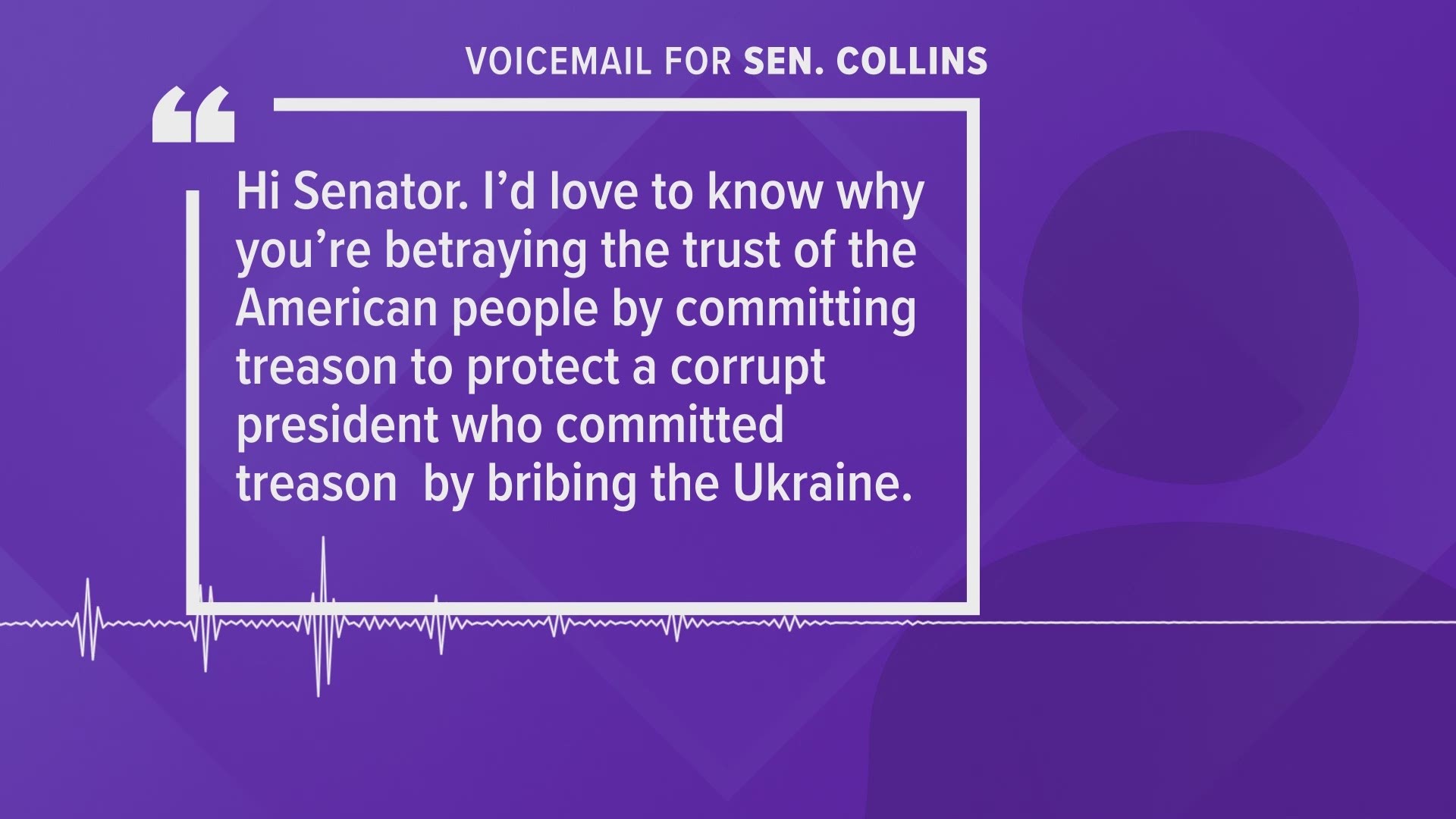 "Hi Senator. I’d love to know why you’re betraying the trust of the American people by committing treason to protect a corrupt president who committed treason by bribing the Ukraine. I’d love to know why you’re obstructing justice. Why are you obstructing justice? Because you want to go to Hell? Are you in some kind satanic cult? I don’t understand why you’re doing the devil’s work. I truly am confused as to why you hate America. Why do you hate America? Why won’t you let justice be served? Why are you so corrupt? Oh right, because you’ve always been a stupid, dumb b***."

RELATED: 'That's not true:' Sen. Collins speaks out against 'head on a pike' remark alleging Trump is threatening Republicans 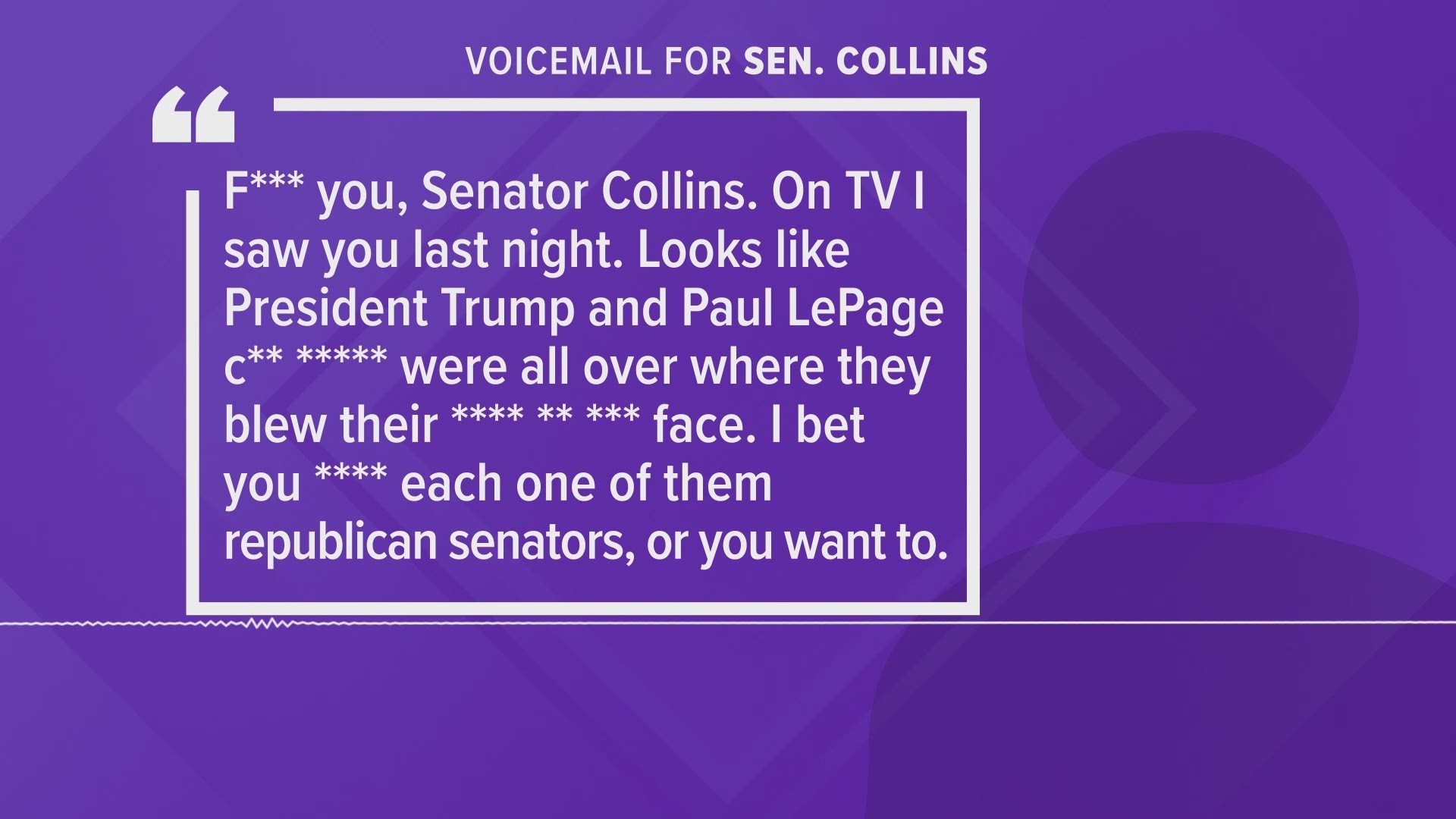 "F*** you, Senator Collins. On TV I saw you last night. Looks like President Trump and Paul LePage c** ***** were all over where they blew their **** ** *** face. I bet you **** each one of them republican senators, or you want to. You’re a half-pint little f***ing cross-eyed s****** with a voice impediment. You suck. You’re a traitor to your country. What you really are—my vile vitriol really just masks my contempt for you, and that you’re a traitor. You support people like Vladimir Putin and Donald Trump. You’re a disgrace, a disgrace to this country. Not just in the Senate, but to you’re country. You’re a f***ing **** traitor. F*** you!"

Collins took a firmer stance on the witness issue this week after new revelations in former National Security Advisor John Bolton's book, but she still has not committed to voting in favor of allowing witnesses to testify.

The questioning phase is expected to get underway at 1 p.m. Wednesday and continue into Thursday.

A final vote on witnesses will likely happen by the end of the week.

NEWS CENTER Maine was not able to independently verify the origin of the voicemails Susan Collins' office received .