According to published reports of the President's schedule, Trump will be making a campaign stop in Bangor on Sunday after his rally in New Hampshire. 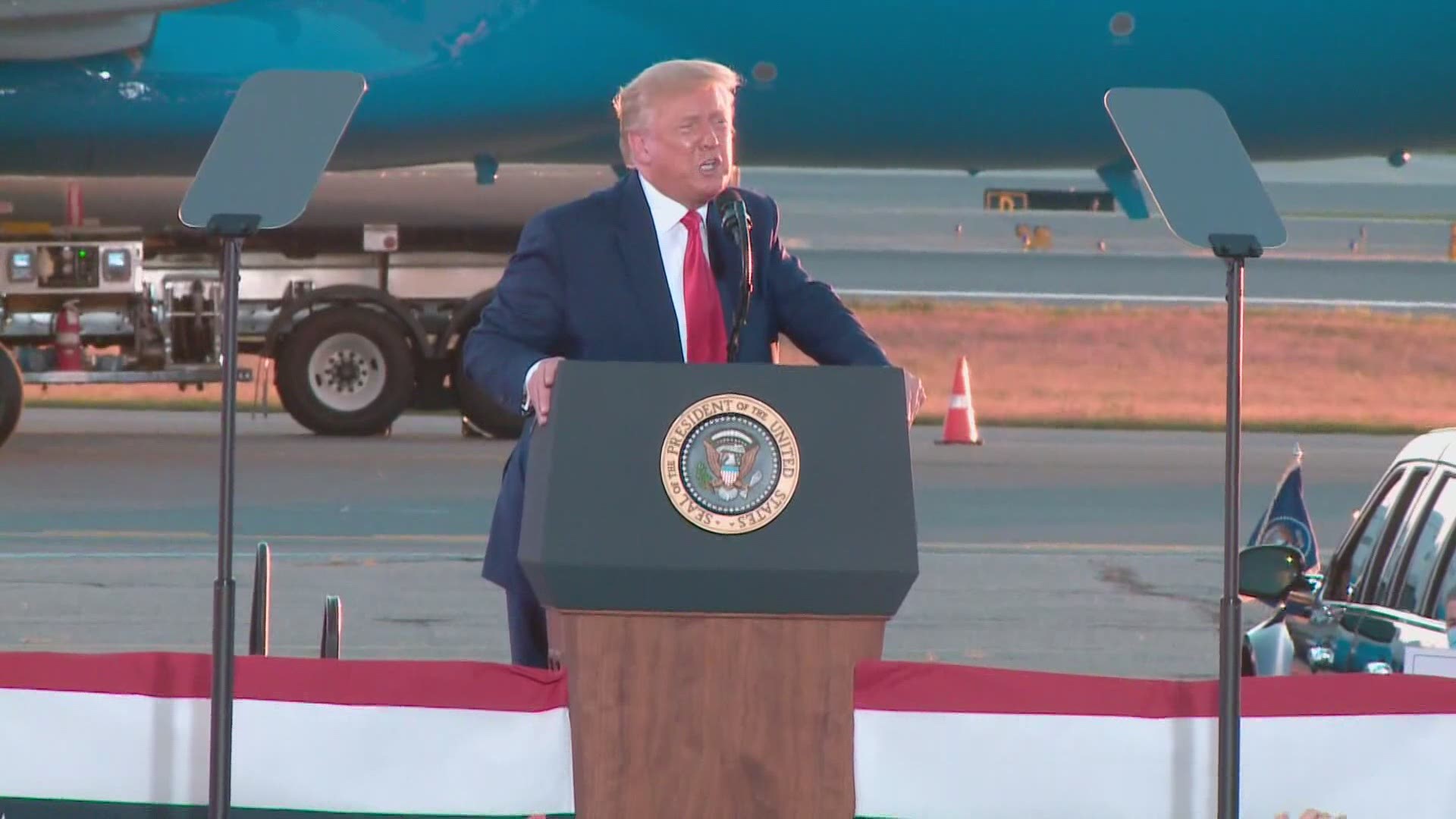 No word where exactly it is being held, but the schedule has Trump arriving at the Bangor International Airport at 2:30 p.m. and leaving at 3:50 p.m.

NEW THIS MORNING: @realDonaldTrump is making a surprise stop in Bangor today. No word yet on where. https://t.co/rQIF2baACd

Trump is set to hold a rally at a hangar at the Manchester-Boston Regional Airport in Manchester, N.H. at 1 p.m.

"The FAA has advised that on Sunday, beyond a planned rally in Manchester, New Hampshire, that President Trump may also visit Bangor, Maine -- part of the state's second congressional district, which awards its one electoral vote separately and went for Trump in 2016," Jonathan Lemire, an AP White House reporter and political correspondent with NBC News and MSNBC tweeted Saturday.

The FAA has advised that on Sunday, beyond a planned rally in Manchester, New Hampshire, that President Trump may also visit Bangor, Maine -- part of the state's second congressional district, which awards its one electoral vote separately and went for Trump in 2016

The National Business Aviation Association (NBAA), an aviation organization, has air traffic management specialists at the Federal Aviation Administration (FAA) Air Traffic Control System Command Center to provide impact statements for VIP Temporary Flight Restrictions (TFRs), detailing the effects they have on business and general aviation, including what airports and airspace might be affected.

The organization lists a presidential flight restriction at the Bangor International Airport for 3:30-7:59 p.m. Sunday.

This would be Trump's first campaign stop in Maine this election cycle, though he toured Puritan Medical Products in Guilford in June.

The Maine Dems were quick to criticize President Trump's visit.

Maine Democratic Party Chair Kathleen Marra said in a statement, "If President Trump thinks a last-minute trip to Maine today will help voters forget about his lawsuit to strike down the Affordable Care Act that could take away health care from more than 100,000 Mainers overnight, or his failure to come up with a strategy to dig us out of the biggest economic downturn since the Great Depression, he'll find out next Tuesday just how wrong he is."

"Mainers were happier when they didn't think we'd have to see him again in our state, and we'll be happier still when we replace him with Joe Biden on November 3," said Marra.

“Meanwhile, Senator Susan Collins has enabled and emboldened Trump’s extreme agenda and failed leadership since the day he took office — she voted with him 94% of the time and helped him stack the federal judiciary with far-right judges who put Mainers at risk. We need leadership in Washington that isn’t afraid to hold Donald Trump accountable, and Senator Collins’ silence is all the proof voters need to see that she’s not up to the task.”

Maine has just four electoral votes, but both candidates are fighting for every vote possible. During a recent campaign trip to Holden, Trump's oldest son, Don Jr., expressed Maine, specifically the 2nd Congressional District, is important in the election because the state splits electoral college votes. Maine is one of only two states in the country that splits votes, rather than the "winner take all" practice the other 48 states adhere by.

"For Sara Gideon and her allies, this is a race about power and who controls the Senate. But Senator Collins’ focus remains solely on doing what’s right for the people of Maine, and how she can use her experience and seniority to get things done - no matter which party controls the Senate or the White House," said Clark.

Both the Biden and Trump campaigns have made multiple trips to Maine and N.H. this election. Biden's wife Dr. Jill Biden recently made stops in Orono and Blue Hill for events focused on labor, small businesses, and the lobster industry.

On Saturday, Kamala Harris' husband Doug Emhoff traveled to Aroostook County where he met with potato farmers in Blaine and hosted a rally in Fort Fairfield.

Vice President Mike Pence held a campaign rally in Portsmouth on Wednesday, and in Hermon, Maine on Monday.

RELATED: Trump to hold rally in NH on Sunday