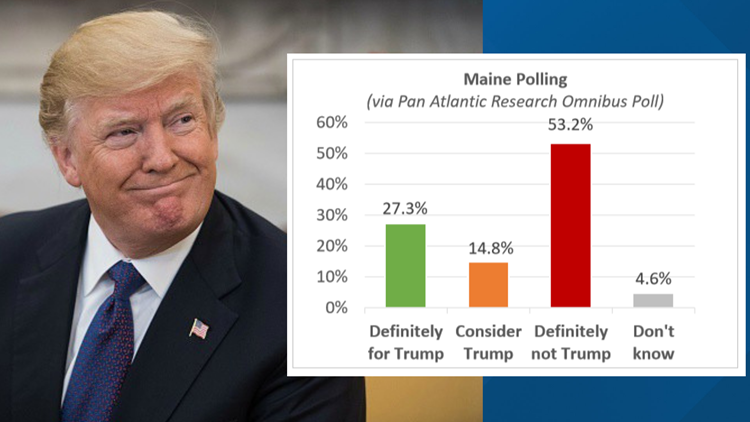 More than half of Mainers are not expected to vote for President Trump in the 2020 presidential election, according to a new poll.

The Maine-based Pan Atlantic Research group released its 55th poll of 500 randomly-selected voters in the state. Both of Maine's Congressional Districts were represented by half of those polled. The poll was split 31% Democrat, 36.1% Republican, 31.8% Independent.

Donald Trump for reelection, according to the poll:

These findings closely aligned with an ABC and the Washington Post poll where 56% of Americans said they would "definitely not" vote for Trump in the 2020 election.

Almost half of Maine voters polled believe the government should provide national health insurance while 37% did not want such a program and 14% were undecided.

Independent Senator Angus King came out on top of the poll in favorability ratings among Maine's politicians.

Mainers polled were split down the middle on how the state's economy is doing as a whole, but when polled from each Congressional District they varied with more voters in the 1st District feeling like the economy was "moving in the right direction," 56.7%, and only 29.9% of voters in the 2nd District feeling similarly.

58% polled expect their household economic situation to stay the same in 2019, while 18% expect things to improve and 16% fear things will worsen.

When polled by party affiliation Democrats found healthcare and insurance to be of most importance while high taxes was more concerning to Republicans.