Critical Insights' spring 2019 poll also shows Gov. Janet Mills off to a strong start, with 47% of voters in approval of her performance through 75 days. 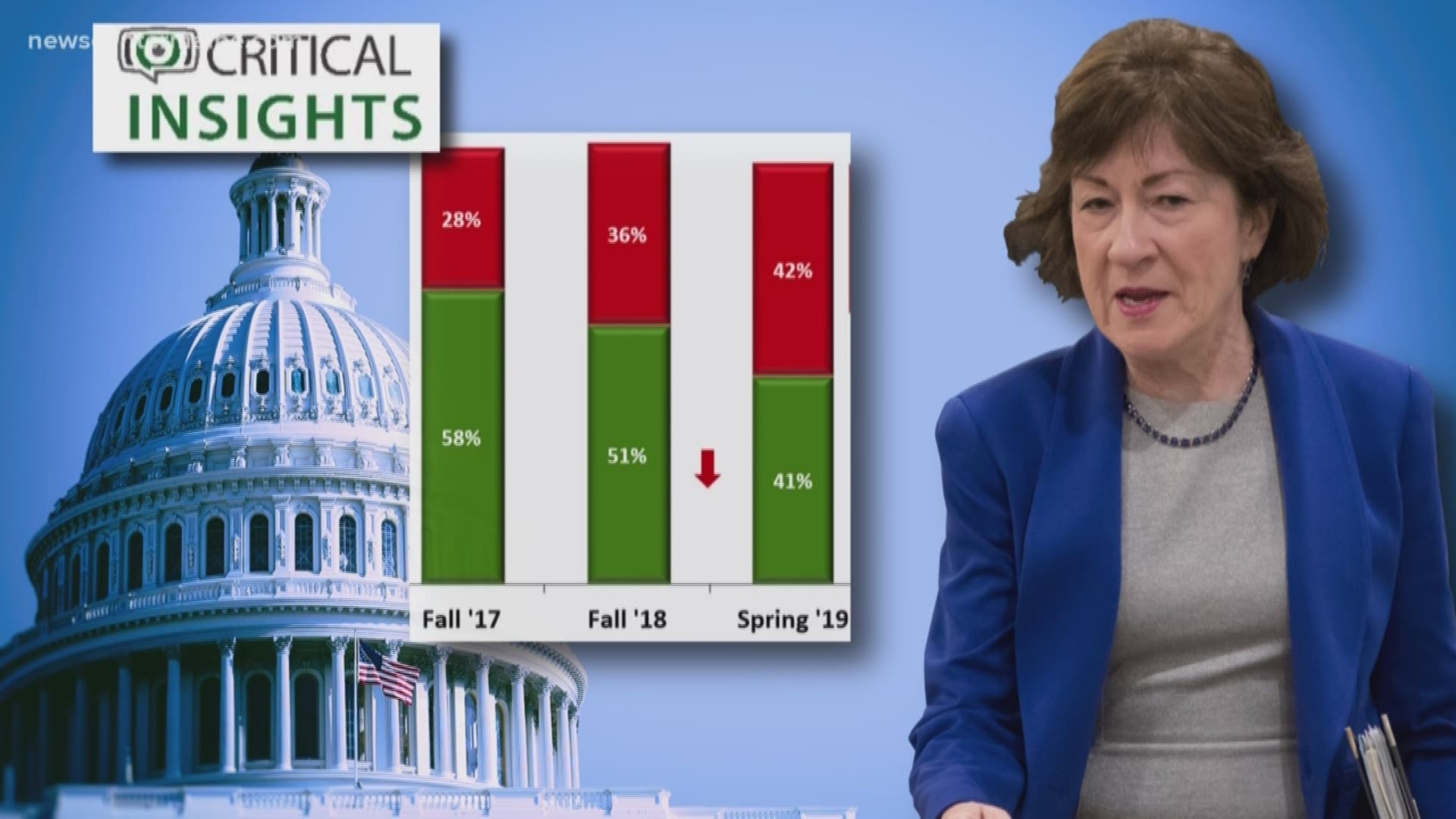 According to a Critical Insights tracking poll released Thursday, Sen. Collins has an approval rating of 41% — down 10 points from last fall's 51% and 17 points from last spring's 58%. What's more, the poll shows that a 42% plurality of Mainers are likely to disapprove, compared to the 41% likely to approve.

Critical Insights' survey differs substantially in recent results from Pan Atlantic, whose spring 2019 poll showed Collins at 62% favorable, and Morning Consult, which had Maine's senior senator at 52% favorable in its Q1 2019 results.

Collins' spokesperson responded Friday to the Critical Insights poll calling it an outlier. "We don’t put much stock in any one poll," Annie Clark said in a statement. "But I would note that the methodology of this one -- including the fact that it was done over several weeks and that it included a significant online component -- is different than you traditionally see with public polls."

Meanwhile, fellow Sen. Angus King is at 57% favorable. That number is mostly on par with Sen. King's historical average through Critical Insights, the poll said.

Gov. Janet Mills is off to a strong start, with the poll showing 47% of Maine voters in approval of her performance through 75 days. About a third, or 31%, disapprove and 22% were not sure. The Legislature's approval is up six points from last fall's 33% to 39% this spring.

About a third of Mainers, or 34%, believe the direction in which Maine is headed is the right track, versus the 28% who believe the opposite, nearly matching the average American in regard to the country at 36% and 25%. Maine hasn't seen that high of a figure since fall 2014 at 37%.

Only a quarter, or 23%, of Mainers believe the nation as a whole is heading in the right direction, compared to the 49% that do not.

The most important issues facing Maine today, according to voters, are health care, the opioid crisis, unemployment and the economy.

Optimism among Mainers regarding the economy has only 22% believing it will be better in the next 12 months, versus 45% who think it will be the same.

"The Way Life Should Be" beat out "Vacationland," 47% to 19%, when Mainers were asked what the state slogan should be.

Critical Insights' poll is conducted each spring and fall, and is a statewide survey of registered voters. Founded in 1996, it's the longest-running consistently-administered tracking survey in the Northeast.

Pan Atlantic's poll surveyed 500 people in March with a sampling error of ± 4.4%.