Dozens of Mainers headed to Washington, DC to protest Judge Kavanaugh's nomination to the U.S. Supreme Court and to urge Senators Collins and King to vote 'no.'

The activists were determined to influence Collins' down-to-the-wire decision, saying she needed to listen to Maine people. Read More 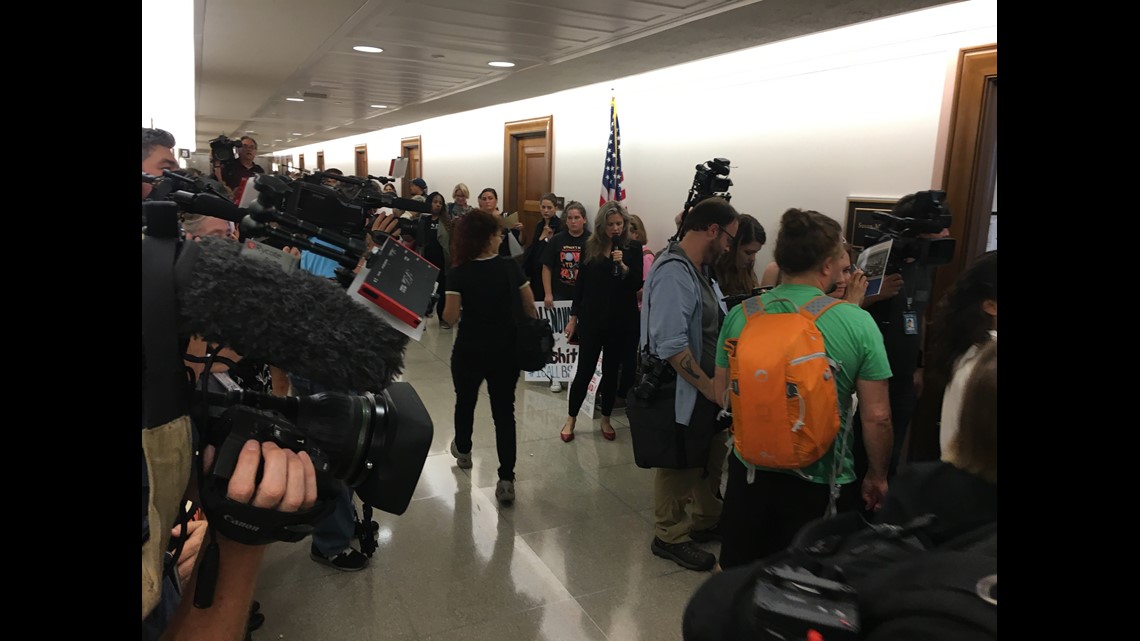 Many of them sexual assault survivors, the protestors who descended on Washington were confident they could make a difference.

The intensity of their mission drove them to swarm Collins' Senate Office and even her Washington townhouse. Their fear: Collins would not hear them.

The group is now meeting with @SenatorCollins staff, sharing stories, and begging the Senator to vote no on @BrettKavanaugh #mepolitcs #KavanaughHearings pic.twitter.com/9bfRRMAmCN

With millions of eyes on her across the country, Sen. Collins took to the Senate Floor Saturday afternoon to announce she would support Brett Kavanaugh's confirmation to the Supreme Court.

The Republican Senator said she spent hours poring through 'thorough' FBI reports, and weigh all the factors. Read More

#BREAKING: @SenatorCollins says she will vote ‘yes’ to move forward with a full Senate vote. She will announce her final decision in a floor speech later today. #NEWSCENTERmaine #KavanaughVote pic.twitter.com/k87LhrFfuq

Sen. Collins stood firm in her decision, saying "It is when passions are most inflamed that fairness is most in jeopardy.” Read More

Hundreds of protestors gathered in Washington, including dozens of Mainers, were 'shocked' by Collins' decision.

A silent wave swept over the Capitol as demonstrators hugged, cried and processed what they felt was a devastating outcome. Read More

The Senate voted 50-48. Collins' key vote made the moment historic for not just the county, but for Maine as well.

EXCLUSIVE: @SenatorCollins spoke to us after today's historic #Kavanaugh vote saying she feels Washington has hit 'rock bottom.' She said she believes Dr. Ford was assaulted, but says she focused on principles of 'due process' and 'fairness' in her decision. #NEWSCENTERmaine pic.twitter.com/eNaZmVs5E9

Sen. King, who voted against Kavanaugh's confirmation spoke to NEWS CENTER Maine ahead of Saturday's vote.

King insisted it would be bad for Maine and the country. Read More

EXCLUSIVE: @SenAngusKing just spoke to us on his way to the Capitol. He would not say whether or not he was disappointed in @SenatorCollins decision, simply saying he is 'disappointed' that Kavanaugh will be confirmed to the Supreme Court. #NEWSCENTERmaine. pic.twitter.com/28ZDJsyzmN

Despite Kavanaugh's confirmation, activists refused defeat, saying they vow to continue their fight through the midterm elections in November.

Both sides agreed that Kavanaugh's confirmation revealed the deep division in our county. The question: What's next? Read More

D.C. UPDATE: The last few days covering @SenatorCollins historic vote on @BrettKavanaugh have been a whirlwind — the biggest takeaway, how divided we are as a nation. What can we do to solve it? #KavanaughConfirmation pic.twitter.com/NAFQexVpAk

'I will not be intimidated'

In an exclusive interview with NEWS CENTER Maine just moments after her historic vote, Sen. Collins said it was the most difficult decision in her 22 years in Washington.

She said she believed Kavanaugh's accuser Dr. Ford was sexually assaulted, but claimed their was not enough evidence to prove Kavanaugh was the assailant.

With millions pouring into a national campaign to unseat her in 202, Collins insisted she 'will not be intimidated.' Read More