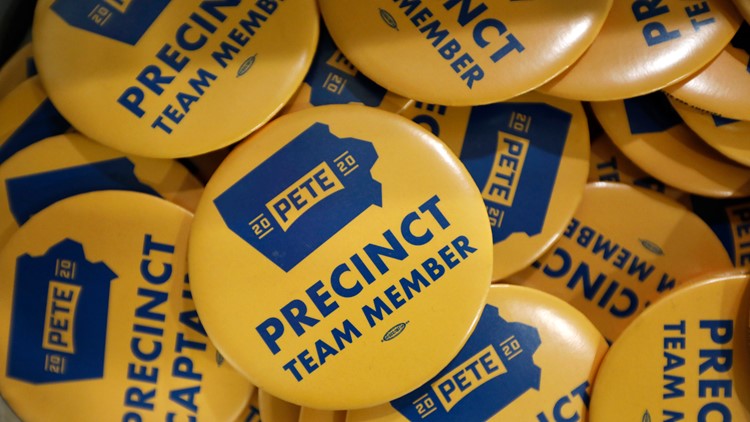 DES MOINES, Iowa — The new rules in this year's Iowa caucuses could give presidential candidates an unprecedented opportunity to spin the results. In previous years, the Iowa Democratic Party reported just one number: the number of state delegates won by each candidate.

For the first time, the party will this year report two other numbers — who had the most votes at the beginning and at the end of the night. Party officials say the new process will enhance transparency. But there is a growing sense it could also breed confusion by giving several candidates the chance to say they won the caucuses.

The additional data is a nod to Vermont Sen. Bernie Sanders and his supporters, who argue the previous rules essentially robbed him of victory in his 2016 race against Hillary Clinton. That contest ended in a narrow delegate victory for Clinton in Iowa.

The Iowa caucuses are supposed to set the tone for the contests that follow, ultimately helping winnow the field. If multiple candidates can claim success in Iowa, it could prolong the fight for the Democratic nomination.

“Adding additional numbers is going to make it more confusing for news organizations and people watching the caucuses,” said Derek Eadon, who worked as Julián Castro’s deputy campaign manager, was a top Iowa aide to Barack Obama in 2008 and is now supporting Sanders. “People are going to want to know who won, and I don’t know if there’s consensus on one number that people will use to declare that.”

What’s happening in Iowa will also play out in other states that hold caucuses, including in Nevada on Feb. 22. Three numbers will be reported: the first round of votes, the final vote total after low polling candidates are eliminated and what are called state delegate equivalents. They represent the number of delegates each candidate will have at the party’s state convention in June. That, in turn, determines how many national convention delegates each candidate receives.

“This is a contest for delegates,” Iowa Democratic Party Chairman Troy Price said. “Campaigns will highlight whatever number is the most advantageous for them. But in the end, what matters is the delegates that come out of Iowa to the national convention, and (state delegates) will remain the best indicator of that.”

There’s a chance a candidate might win the most support during the first vote but lose out on the final alignment — and ultimately the delegate count — after supporters for candidates who are not viable realign after the first round of counting. This is a scenario that could play out for a candidate like Sanders or former Vice President Joe Biden, both of whom are expected to be viable in the largest number of precincts statewide.

The changes reflect a hangover from the 2016 campaign that looms over Iowa Democrats.

Some Sanders backers argued the publicly reported outcome of the caucuses, which showed Sanders and Clinton nearly tying in the delegate count, with Clinton slightly ahead, didn’t adequately reflect the raw number of voters turning out to support the Vermont senator. That perceived disparity between Sanders’ support on the ground and the delegate outcome — a disparity that is not backed up by publicly available data — fueled charges from his supporters that the caucuses were tilted in favor of Clinton.

Four years later, some Iowa Democratic operatives are concerned that if Sanders wins the most support in the state but loses the overall delegate count, that could again drive charges that the caucus process is stacked against a particular candidate.

Sanders’ Iowa state director, Misty Rebik, said that “the popular vote is very important. We fought for (the reporting change), and we’re proud of that.” Rebik suggested the campaign is going to tout the first alignment numbers no matter the outcome.

“We want to emphasize that the way that we beat Donald Trump is by having the biggest, largest grassroots coalition, and that’s through pure numbers,” she said.

The Associated Press will report all three results but will only declare a winner in Iowa based on the number of state delegates won by each candidate.

RELATED: Missed handshake by Sanders, Warren after debate adds to talk of rift

RELATED: Disagreements at Democratic debate over US military abroad