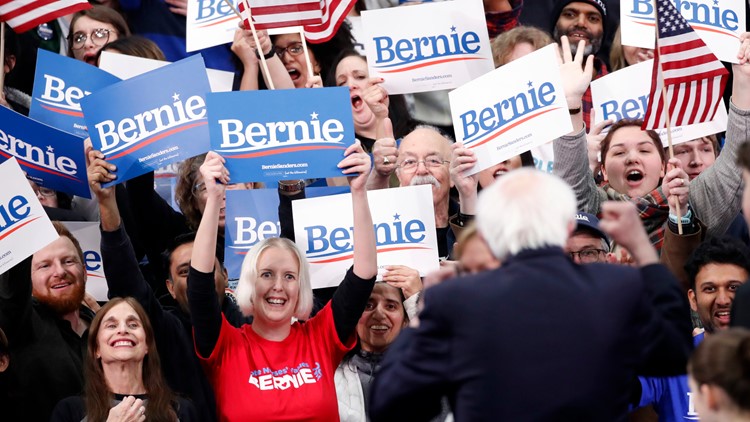 VERMONT, USA — The Bernie 2020 campaign announced its co-chairs in all Super Tuesday states on Friday, the first campaign to do so.

“The Co-Chairs represent a diverse coalition of progressive elected officials, local activists and community leaders that show the strength of Senator Sanders’ ‘Not Me, Us’ movement in communities across the country,” the Sanders campaign press release says.

Campaign co-chairs are 'go-to allies' in communities across the state they represent, Bernie 2020 Northeast Press Secretary Rosemary Boeglin told NEWS CENTER Maine. "...They will work with our political and organizing teams to build events and relationships across the state as we look ahead to Super Tuesday."

Jackson said in a statement that he endorsed Sanders, “because it is time we lift people up…I know that he is the only one we can trust to fight for us.”

"Working with local leaders like Jonathan Fishman of Phish-fame allows us to engage with different communities in creative ways to involve everyone in the political process," Boeglin said.

Fishman and Lyons are married and live in Lincolnville. In a statement, they said, “Bernie has been fighting his entire career spanning over 40 years for education, climate change, local and small agriculture, removing big money from politics, health care and human rights. He has been consistent, truthful and persistent. We have confidence that he will set the board for success with regard to these concerns by calling on citizens, appointing professional individuals and building teams with the goal of bringing the globe together to combat these issues."

"These Co-Chairs represent Bernie's multi-racial, multi-generational, working-class movement to take on Donald Trump, and we are proud to work alongside them to build a progressive movement and elect Senator Bernie Sanders as the next President of the United States," Bernie 2020 National Political Director Analilia Mejia said.

Since winning the Iowa caucuses and the New Hampshire primary, Sanders is full steam ahead and has invested more than $5.5 million in television and digital ads in Super Tuesday states, including Maine, according to the campaign press release.

Sanders has a campaign office in Portland, which opened in December 2019.