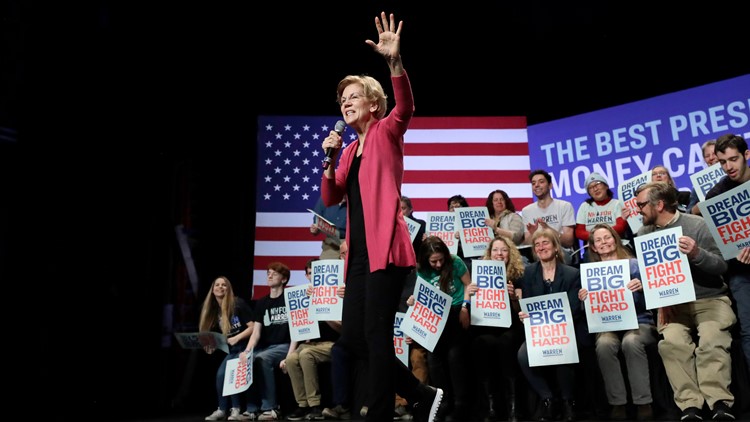 Democratic presidential candidates brace for elevated stakes in N.H. after chaos and unclear results in Iowa

NEW HAMPSHIRE, USA — Events in New Hampshire are already underway, and the Democratic presidential candidates—and the nation—are eagerly waiting for the Iowa caucus results after a night of confusion and unclear results.

The Iowa Democratic Party says the reporting delays were due to a coding issue. The issue has been fixed, and the party says it hopes to release the results “as soon as possible.”

Being the first election of the election cycle, Iowa’s importance has always been paramount. The caucus can build momentum for candidates. It also offers up important delegates that go towards nominating the party’s candidate at the Democratic National Convention.

Since 1972, the caucus winners have gone on to win their party’s nomination in seven of ten contested cases, and many see Iowa as a predictor for the general election.

RELATED: How well do the Iowa caucuses predict the presidential race?

Buttigieg was criticized for saying, “by all indications, we are going on to N.H. victorious,” despite no official results reported. His campaign staffers took to Twitter Monday night posting photos of caucus ballots showing Buttigieg winning various precincts across Iowa.

The Sanders campaign senior advisor Jeff Weaver said Tuesday that their campaign results showed Sanders in the lead with 29.59%; Buttigieg in second with 24.59%; Warren in third with 21.24%; and Biden with 12.37%.

The N.H. primary is considered a make-or-break moment for many candidates. Winners will gain even more momentum, donors, and endorsements, while the losers will be forced to re-evaluate their campaigns altogether.

As with Iowa, a lot can be said about different candidates' strategies when it comes to important primaries like N.H. Sanders, who in 2016 overwhelmingly defeated Hillary Clinton in the primary 61% to 38.2% and won 15 delegates, seems to not be doing as many events as some of his competitors. Sanders is leading a new poll with 24% support among primary voters, so he may be a candidate not so worried about the primary.

RELATED: All the presidential candidate events in N.H. ahead of the primary

Warren and Biden seem to be doing the same as Sanders, but for other reasons. They each only have two official events in N.H. Biden is reportedly focusing on South Carolina. For Warren, who already had a town hall in Keene, N.H. Tuesday morning, the strategy is unclear considering she’s closely polling third in N.H. with 13%.

Buttigieg and Yang have the most events planned leading up to the primary next Tuesday, and they perhaps have the most to gain by a strong showing. The new poll puts Buttigieg in fourth with 11%, closely behind Warren. His base consists of moderate liberals who could be torn between him and other moderates Biden and Sen. Amy Klobuchar. He doesn’t have to necessarily win Iowa or N.H.—though of course, that is the goal—he just has to do better than them.

Yang continues to nip at the heels of the front runners and is growing his support rapidly. He by far has the most events scheduled in N.H., mainly town halls planned throughout the state. Tuesday, Feb. 4 alone he has three town halls planned, and the schedule is stacked similarly until the primary day the following week.

Another surprise in N.H. schedules is Tulsi Gabbard's. She has roughly two town halls per day leading up to the primary, one in direct opposition to the CNN town halls to which she wasn’t extended an invitation. CNN said invitations were “extended to candidates who qualify to participate in the Democratic National Committee-sanctioned debate,” which will be on Feb. 7. Joe Biden, Elizabeth Warren, Andrew Yang, Tom Steyer, Bernie Sanders, Pete Buttigieg, Amy Klobuchar, and Deval Patrick will all be in the CNN town hall lineup.

Michael Bloomberg, on the other hand, is skipping N.H. completely. He also skipped Iowa, which may have helped him considering the chaos and uncertainty that resulted there Monday night. It seems his focus is on Super Tuesday. Bloomberg continues to pour millions into TV ads and local, on-the-ground organizing in Super Tuesday states.

Maine is one of 14 states that will vote in primaries on March 3. Last week Bloomberg opened a campaign office in Portland.

Iowa caucus results are expected sometime Tuesday evening and, until then, candidates will plow forward with their town halls and rallies, hoping for some sense of clarity to come soon. One thing we know for sure though, Iowa and N.H. are just the beginning, and the 2020 election won’t slow down again until November.

NEWS CENTER Maine will be in N.H. this week and next week to bring you primary coverage. Take this poll to let us know what issues you care most about.