The former secretaries of defense and state are leading a lecture series Tuesday titled “Defense and Diplomacy in an Uncertain World.” 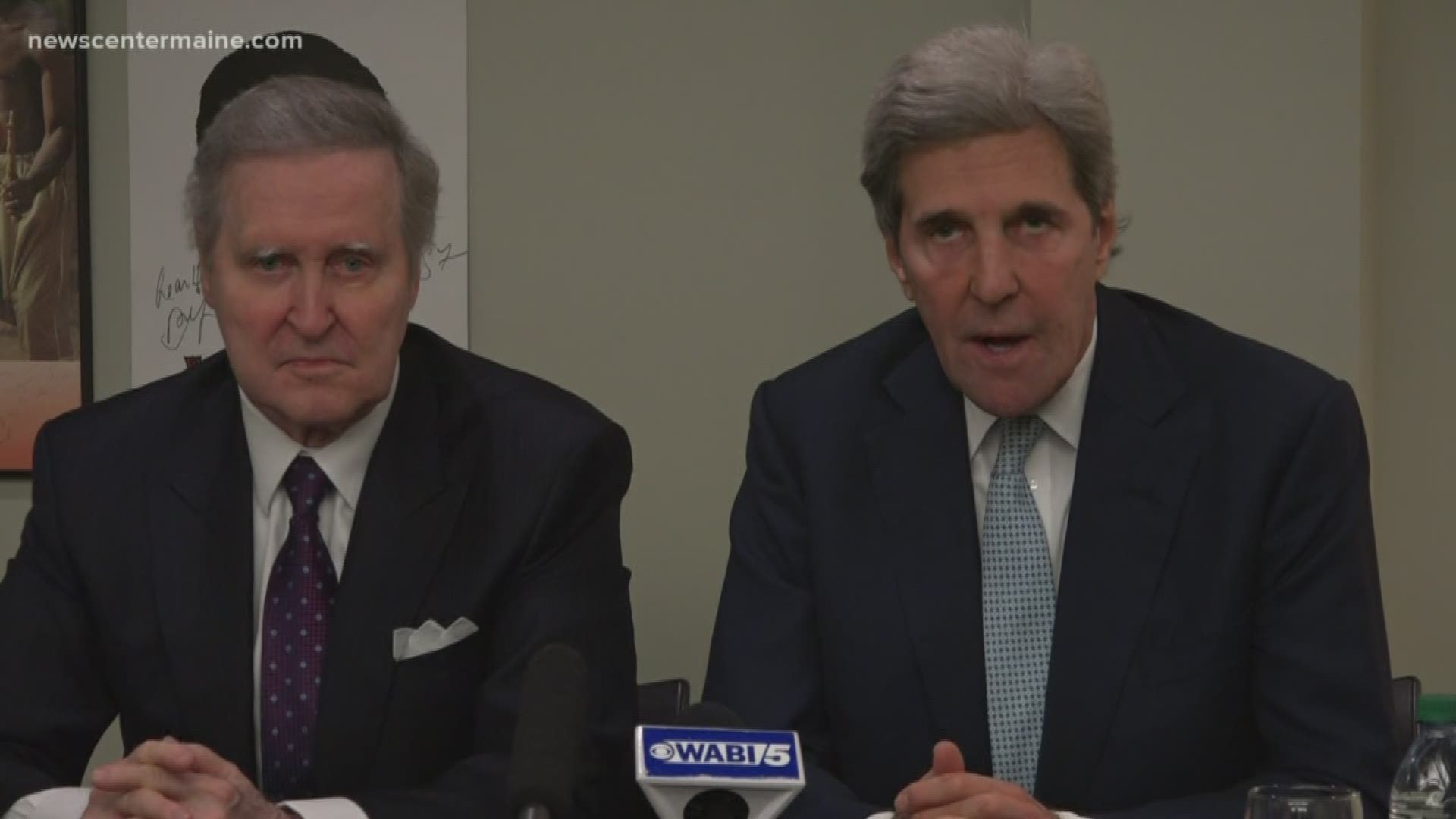 ORONO, Maine — Former Secretary of State John Kerry was in Maine on Election Day Tuesday but it’s not because he’s running for office.

Kerry joined former Secretary of Defense and Maine Senator William Cohen at the University of Maine for a lecture titled “Defense and Diplomacy in an Uncertain World.”

Topics ranged from climate change, Washington's ongoing impeachment inquiry, the race for 2020, and the Trump presidency.

Both Cohen and Kerry's political backgrounds make them more qualified than most to speak about foreign policy including President Trump's recent actions in Syria.

"I think we're less safe as a result of these kinds of actions," said Cohen, in an exclusive interview with NEWS CENTER Maine. "It seems to me it makes us look certainly weaker in the eyes of other countries that they feel they can't rely upon the President's word or our policies. Therefore, they are going to look for other relationships that will not be in our interest."

RELATED: US troops in Syria going to Iraq, not home as Trump claims

RELATED: Syria cease-fire off to rocky start amid reports of fighting

RELATED: United States and Turkey have agreed to cease-fire in Syria, Pence says

Cohen said continuing to make moves abroad without consulting our allies makes it so we may have, and may continue to, put them at risk.

"It sends a signal to other countries that you can't rely upon the United States," said Cohen.

Cohen, a Bangor native, got his political start in local office on the city’s school committee and city council. He represented Maine in Congress for 24 years before joining President Bill Clinton’s cabinet.

Kerry served as Secretary of State from 2013-2017 under the Obama Administration. A long-time U.S. Senator from Massachusetts, Kerry made a presidential run in 2004 but conceded defeat to incumbent President George W. Bush.

Now, Kerry's made the climate his latest mission.

On Tuesday, Kerry said the United States is "way behind" when it comes to climate change.

"People are dying today in the United States from climate change," said Kerry. "In mudslides, in floods, in overheating, in fires, in storms, and it is irresponsible for anybody to be suggesting that climate change is a Chinese hoax."

In a few weeks, Kerry formally announced he will be spearheading a new bipartisan initiative, with politicians and business leaders, to put the topic of climate change to a vote.

Kerry said President Donald Trump pulling out of the Paris Agreement is committing "one of the most irresponsible acts I could think of in terms of a global impact."

He believes the U.S. should be leading the charge on climate; not getting out of this worldwide climate initiative.

Kerry said the vast majority of governors and mayors are fighting to stay in the agreement and meet its standards and this new initiative will "make a difference next year and beyond."

The U.S. is not legally out of the Paris Agreement until the day after next year's election, nearly one year to the day, so Kerry said this Election Day Tuesday should be motivation for many Americans in 2020.

Tuesday's event, held every other year, was the 12th of its kind in the William S. Cohen Lecture Series and was sponsored by the Cohen Institute for Leadership and Public Service.