Hundreds gathered in Hermon on Monday for a ‘MAGA’ rally hosted by VP Mike Pence; Gov. Mills said she was “disappointed” and “saddened” by what she saw at the rally. 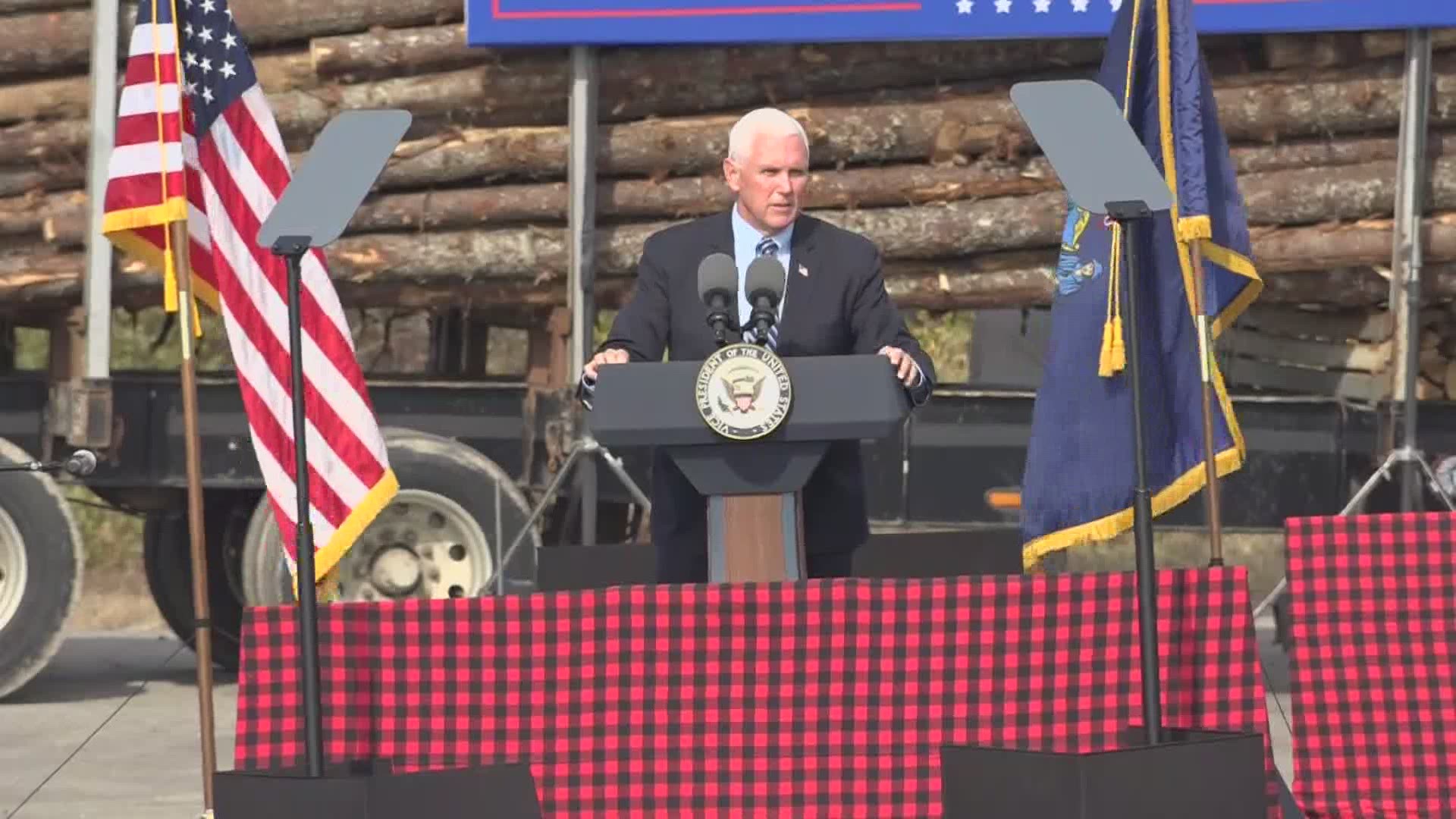 AUGUSTA, Maine — Maine Gov. Janet Mills voiced her disappointment of the Vice President over the “Make America Great Again!” rally in Hermon earlier this week, where hundreds—many not wearing masks—gathered for the outdoor rally.

At the Maine CDC coronavirus briefing on Tuesday, Mills said she was “disappointed” and “saddened” by what she saw at the rally—large crowds, little to no social distancing, and scant mask-wearing among attendees.

Mills’ executive order on gatherings currently limits outdoor gatherings to 100 people, which the rally far exceeded. The Maine GOP boasted the large crowd that came to hear Vice President Mike Pence speak at the Dysart's warehouse in Hermon, saying it was a “record turnout.” Organizers claim upwards of 1,500 people were in attendance.

"Today we saw record turnout for this historic event, drawing Mainers from all 16 counties to welcome Vice President Pence back to our beautiful state,” Maine GOP Chair Dr. Demi Kouzounas said in a statement after the rally. “The enthusiasm we saw today made it clear: Mainers are ready for four more years of 'Promises Made, Promises Kept.’”

Despite media reporting “several hundred” attendees, more than 1,000 people arrived with less than 72 hours notice on a Monday morning. Great turnout for a peaceful protest of Biden’s anti-jobs policies.#mepolitics pic.twitter.com/xw1OMTksVn

An Executive Order was signed in April requiring face coverings in public places where physical distancing is difficult to maintain, though many in the crowd could be seen not wearing masks or practicing social distancing.

“Research shows that face coverings help limit potential transmission of the virus that causes COVID-19,” Dr. Nirav Shah, Director of the Maine Center for Disease Control and Prevention, said. “Wearing a face covering in public places where physical distancing is difficult shows respect for others and reduces the risk that the virus could spread as more people move about Maine.”

When asked about how the State’s limitation on outdoor gatherings and other mandates come into play at political events and rallies such as this, Mills said regardless of the type of gathering—whether it’s political, or non-political—she and her administration are continuing to discourage going to these large gatherings.

In regard to the Pence rally on Monday, Mills said personally, she’s disappointed.

“I’m saddened, because Vice President Pence is the head of the Coronavirus Task Force, we’re on the phone together every week,” Mills continued. She said a few weeks ago, she asked Pence what the Trump Administration’s policy and stance on large gatherings and safety precautions are. Mills said Pence told her it was their “strong recommendation” that people avoid large gatherings and follow guidelines.

Mills said, “I’m disappointed, from what I heard that he did not heed his own advice [Monday].”

The Trump Administration and the Republican National Committee did not immediately respond for comment.

Watch the Tuesday briefing here; Mills' comments on the rally begin around the 58-minute mark: