Maine Senator Susan Collins: 'Changing of the (masking) regulations to better reflect science I think gave us all a lift'

'My hope is that the change to guidance by the CDC will encourage more people to get vaccinated. That’s the way I look at it,' Sen. Susan Collins said. 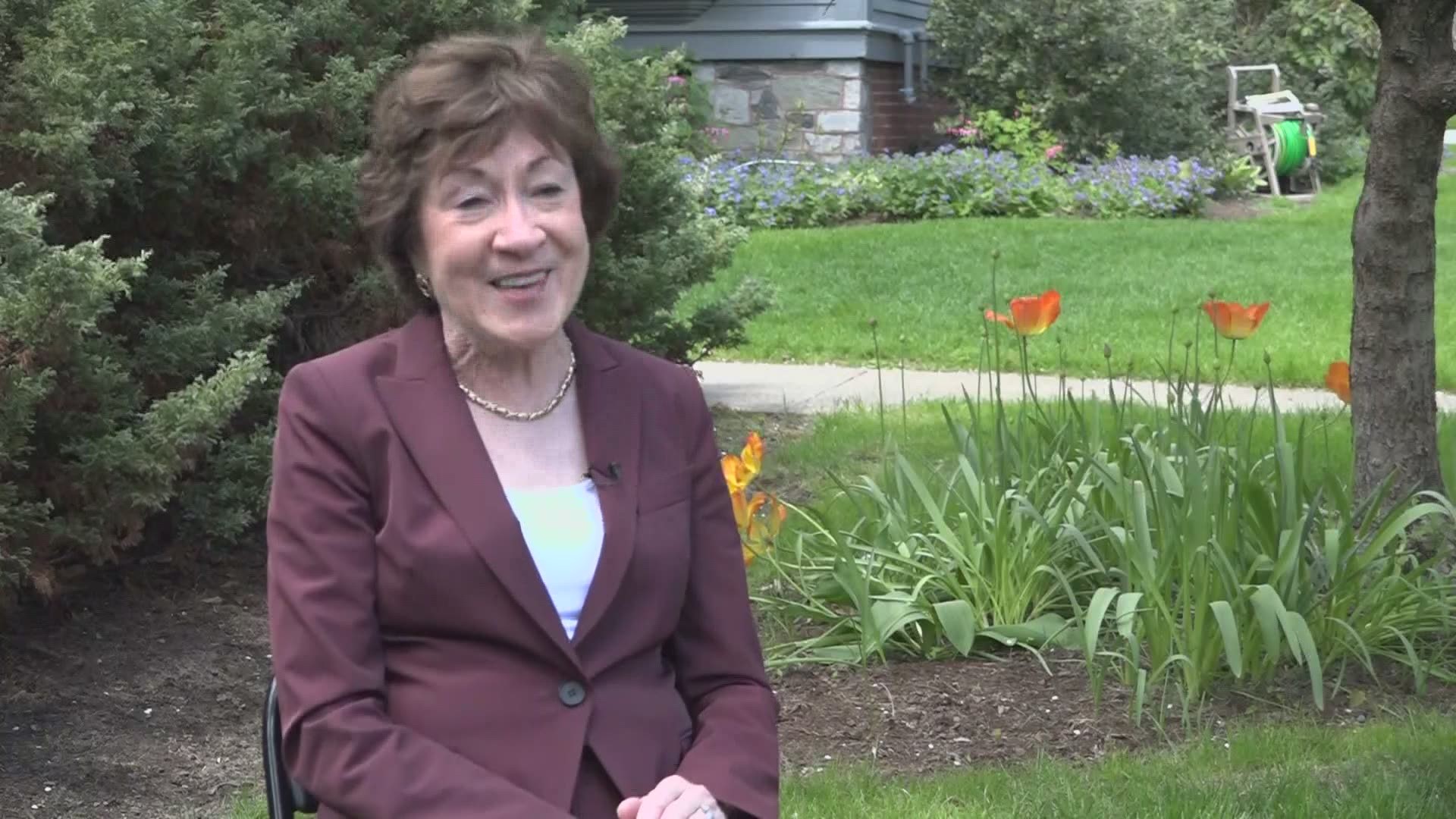 BANGOR, Maine — NEWS CENTER Maine's Sam Rogers sat down with Republican Maine Sen. Susan Collins on Friday to ask her about the updated COVID-19 guidance from the U.S. Centers for Disease Control and Prevention (CDC).

Shortly after the interview, Gov. Janet Mills announced that Maine will align its mask guidance for those who are fully vaccinated with the guidance from the U.S. CDC. Thus, effective May 24, masks will no longer be required in public indoor spaces in Maine.

The update from Mills comes one day after she announced updates to the state's reopening plan, called the "Moving Maine Forward Plan," which eased capacity limits and outdoor physical distancing requirements. Thursday's update, however, was announced as the U.S. CDC released its new guidance.

In addition to the indoor mask requirement being lifted for those fully vaccinated, the physical distancing requirement at indoor public settings where people are eating or drinking and therefore would be removing their face covering—such as indoor restaurants, bars, dining areas in camps or in congregate living facilities, and break rooms—will also be lifted on May 24.

During a Senate Health Committee Hearing on Tuesday, Collins was critical of the U.S. CDC's previous guidance for mask-wearing, telling U.S. CDC Director Dr. Rochelle Walensky, "I always considered the CDC to be the gold standard. I don't anymore." On Friday, Collins expressed a brighter outlook in the wake of the updated guidance.

“It’s been a really difficult year for our country and the changing of the regulations to better reflect science I think gave us all a lift," she said. "It also provides an important incentive for people to get vaccinated because now they know that if they’re fully vaccinated they can more fully participate in life, that they don’t have to wear a mask outdoors at all and in most cases not indoors either. So, this provides a real incentive for people who have been hesitant about getting the vaccination or thought ‘well gee, it doesn’t really give me any particular advantage’ to go ahead and get it.”

Still, Collins said she doesn't agree with the CDC's current guidance on school reopenings and the operation of summer camps. She believes the guidance in these areas conflicts with the science, which she said will make people be more likely to disregard "the valid CDC recommendations."

“The CDC is the agency for which I’ve always had the greatest respect, but what I have seen is that the agency has not kept up with the latest scientific data, with the advice from public health experts from all over the country on everything from school openings to the operation of summer camps to the wearing of masks," Collins said. "So, I hope this is a turning point for the CDC because it’s really important that Americans be able to have confidence in the CDC guidelines and recognize that they should be followed. And if they know that they’re in conflict with the science, as they still are on school openings and on the operation of summer camps, then they’re likely to disregard the valid CDC recommendations.”

When asked if there is a different health organization she considers to be "the gold standard," Collins complimented the U.S. Food and Drug Administration (FDA) for its contributions to vaccine distribution.

“I think the FDA has done a good job in approving vaccines after careful review but quickly, and recognizing the urgency of getting vaccines out to the public," Collins said. "I think the FDA has done a good job and I’m hopeful this is a glitch in the CDC’s operations and that it will learn from the mistakes that it has made. To be fair to the CDC we’ve learned a lot about this virus over the last year, so some of the initial guidance – it makes sense that it would evolve over time. What has been frustrating to me is when the scientific consensus has been overwhelming as it has been on the very, very low, virtually non-existent risk of transmission outdoors, and the CDC stuck to the mask guidelines. That’s what needs to change. The CDC needs to show – and I would suggest it start with schools next and summer camps – that it can respond more quickly when the science is clear.”

Collins said she is much more sympathetic to the CDC when it comes to indoor guidance because "it's a much more difficult calculation."

“The evidence for not having to wear masks out of doors has been strong for some time – for months. Indoors is a much more difficult calculation and so I’m more sympathetic to the delay by the CDC in that area. And there are still some instances like airplanes where the CDC and the TSA are keeping the mask requirement in place and that probably makes sense," Collins said. "After all, you don’t know whether the people on the airplane have been vaccinated or not, where they have traveled, and it’s an enclosed space. I would note that airplanes have very good ventilation systems but still, I would understand and do understand keeping that requirement. My point is that in order to encourage people to follow that type of guideline, the CDC needs to be more responsive when the science clearly shows that its guidelines are out of date."

House Speaker Nancy Pelosi said Thursday she is not changing the rules requiring masks on the House floor. Collins said there hasn't been any conversation about whether masks will be required in the Senate, but she suspects most senators will choose not to wear their masks.

“There has not been any conversation. I do not know of anyone in the Senate who has not either been vaccinated or had COVID. Maybe there are some, but the House is a much larger body and there may be more people who are unvaccinated, and they should continue wearing masks," she said. "But I’m not sure that that applies to people who are fully vaccinated. I suspect that in the Senate, most senators – since all of us to my knowledge have been vaccinated and a couple have had COVID – will choose to not wear their masks.”

Collins also said she's wary of the idea of a vaccine passport, adding she doesn't believe there should be a federal mandate.

“I think that should be left up to individual states and there shouldn’t be a federal mandate," Collins said. "I carry my white vaccine card with me in case anyone needs reassurance that I’ve been vaccinated, and I think that’s a good practice. But I’m very wary of the federal government trying to set up some national vaccine passport. I don’t think that’s a good idea.” 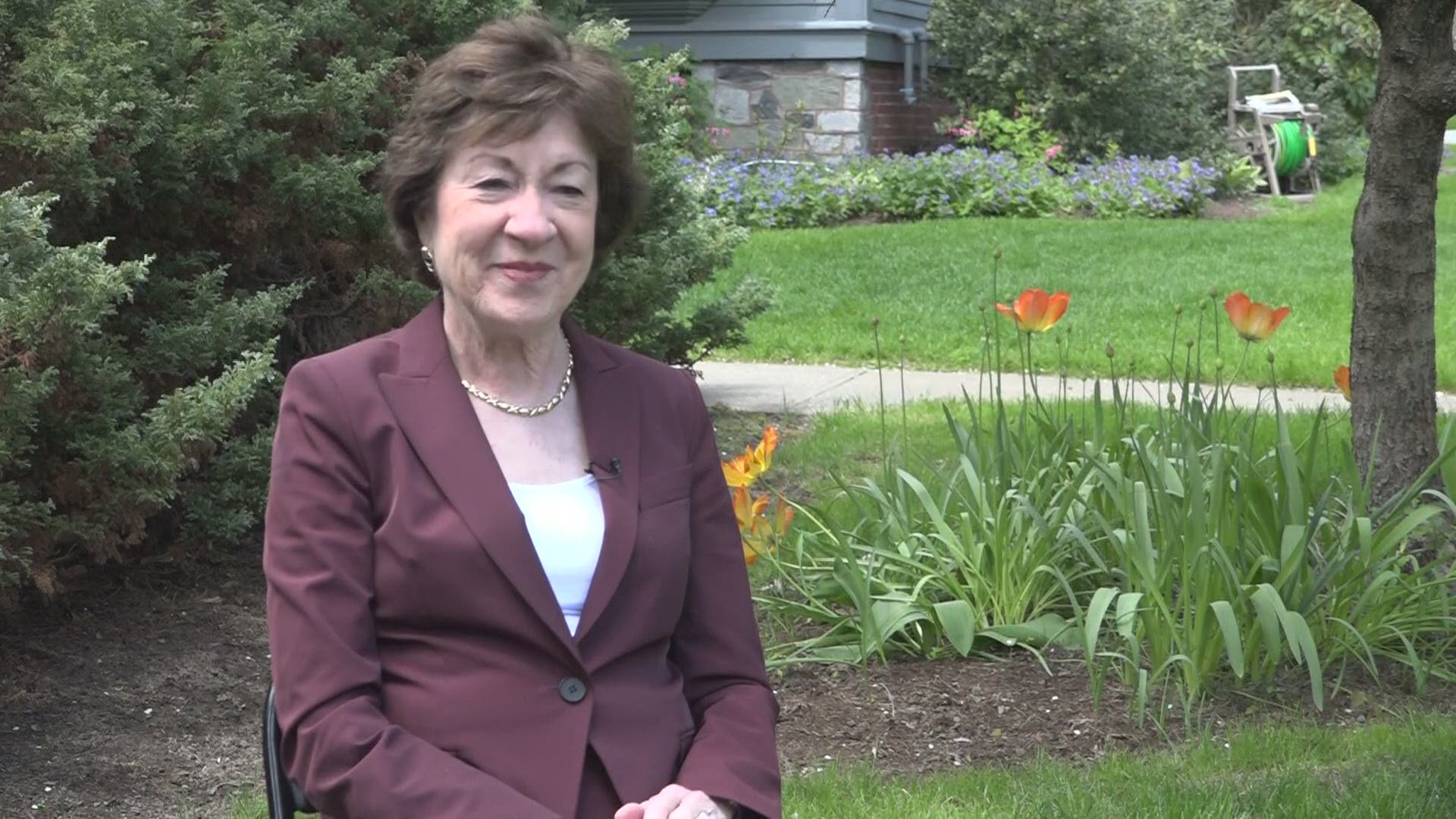 "Dr. Walensky, I used to have the utmost respect for the guidance from the CDC," Collins, who is a member of the committee, said. "I always considered the CDC to be the gold standard. I don't anymore."