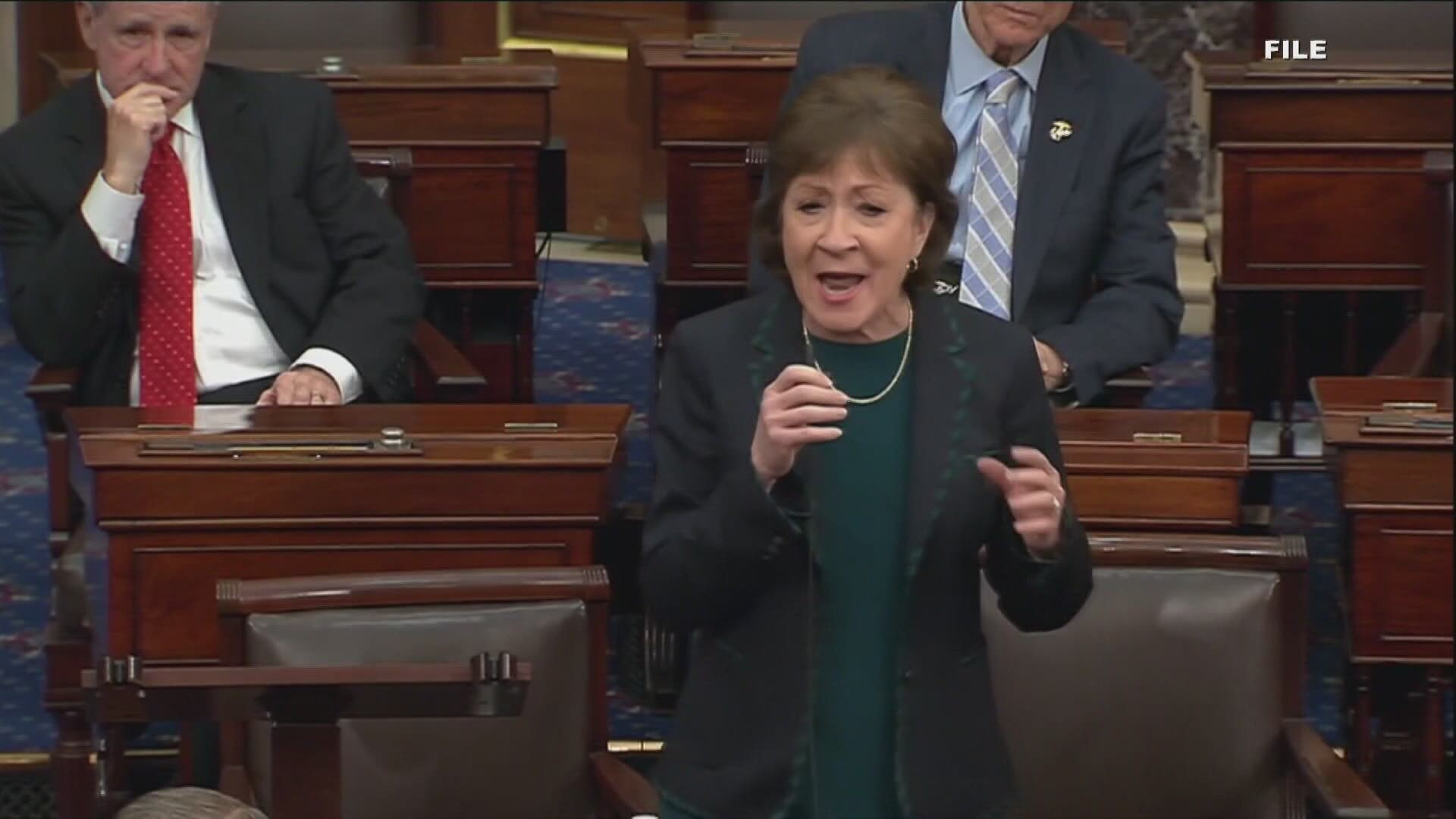 MAINE, USA — After the Maine Republican Party (GOP) overwhelmingly voted against censuring Sen. Susan Collins, former Caribou legislator John DeVeau announced that a group of "around 25 conservative” Republicans has formed a new caucus, in a break from the party.

DeVeau, who is chairman of the one county committee that voted in favor of censuring Collins, said the group formed their own Maine Grassroots Republican Caucus.

DeVeau said the political subgroup is “a kind of Maine-based version of the U.S. House Freedom Caucus." He dismissed concerns that the new group might divide Maine's Republican Party.

“The Maine Republican Party is not listening to the voices of disenfranchised Republicans that are trying to hold their elected officials accountable,” DeVeau said in the release.

DeVeau is the chairman of the Aroostook County Republican Committee, which voted to censure Collins over January vote to convict former President Donald Trump in his second impeachment trial.

"We want to hold them accountable," DeVeau said of the Maine Republican Party. "Nobody has taken any actions to hold [Collins] accountable for her decision, and many of us in the party feel like we're being disenfranchised. Some are even talking about leaving."

In a statement to NEWS CENTER Maine, Collins defended her vote to convict Trump, saying her vote was "based on my duty to uphold the Constitution and to render impartial justice, rather than on partisan political considerations."

But DeVeau said in a phone interview with NEWS CENTER Maine that Collins "went against her constituents" when she cast her vote to convict the former president, leading to DeVeau and the group of state Republicans' effort to censure her.

After the Maine GOP State Committee voted 41-19 Saturday not to censure her, the internal strife reached a boiling point.

"We decided we were going to do something about it," DeVeau said.

RELATED: Senator Susan Collins will not be censured by Maine GOP, according to her office.

"[Saturday's] decision is a testament to the Republican Party's 'big tent' philosophy that respects different views but unites around core principles," Collins said in a statement. "Our party has been most successful when it has embraced this approach to advance our shared goals of providing tax relief to families and small business job creators, pursuing fiscal responsibility and government accountability, promoting personal responsibility, protecting constitutional rights, and ensuring a strong national defense."

In response to the new caucus, Annie Clark, a spokesperson for Collins, told NEWS CENTER Maine Collins is "gratified by the support she continues to receive from the Maine Republican Party, which overwhelmingly rejected a censure motion by a 19-41 vote on Saturday."

"She also appreciated the strong grassroots support she had all over the State as is indicated by the fact that she carried 85 percent of Maine’s communities in last fall’s election," Clark said.

In February, in the wake of mounting criticism over Collins' impeachment vote, Savage said on WGAN Radio that he had been trying to keep the party “from being ripped apart” and that the debacle over her vote and possible censure was simply public discourse.

Now, more than a month later, that discourse has led to further division and the new caucus.

But DeVeau said he and the group of Republicans who broke from the party “didn’t create the division.”

“[W]e’re actually trying to unify the Republican Party by giving the disenfranchised a voice at the statewide level and to restore the Constitutional balance of powers,” he said in the release.

DeVeau said while national-level issues play a part in it, ultimately, the creation of the new caucus is about state issues.

"We’re interested in trying to fix state issues because that’s what’s most important," he said.

He explained that the division has been building among the party "for a while," saying the Maine GOP didn't show interest in being involved with the "Reopen Maine" rallies in Augusta, which protested the state's coronavirus-related business restrictions. DeVeau also said the party hasn't held Gov. Janet Mills accountable for her pandemic response.

The caucus said their goal is to work with conservative legislators on bills and initiatives and help local candidates run for offices in 2022.

The group said its first official event will be held in Augusta on April 17 in support of a “Tax Day Rally” by Maine Taxpayers United.

According to DeVeau, party leaders have not yet spoken with DeVeau or the caucus leaders about the new caucus.

The Maine GOP did not respond to requests for comment on this story.