After President Trump finished his Manchester, New Hampshire MAGA rally, he made a previously unscheduled visit to Treworgy Family Orchards in Levant 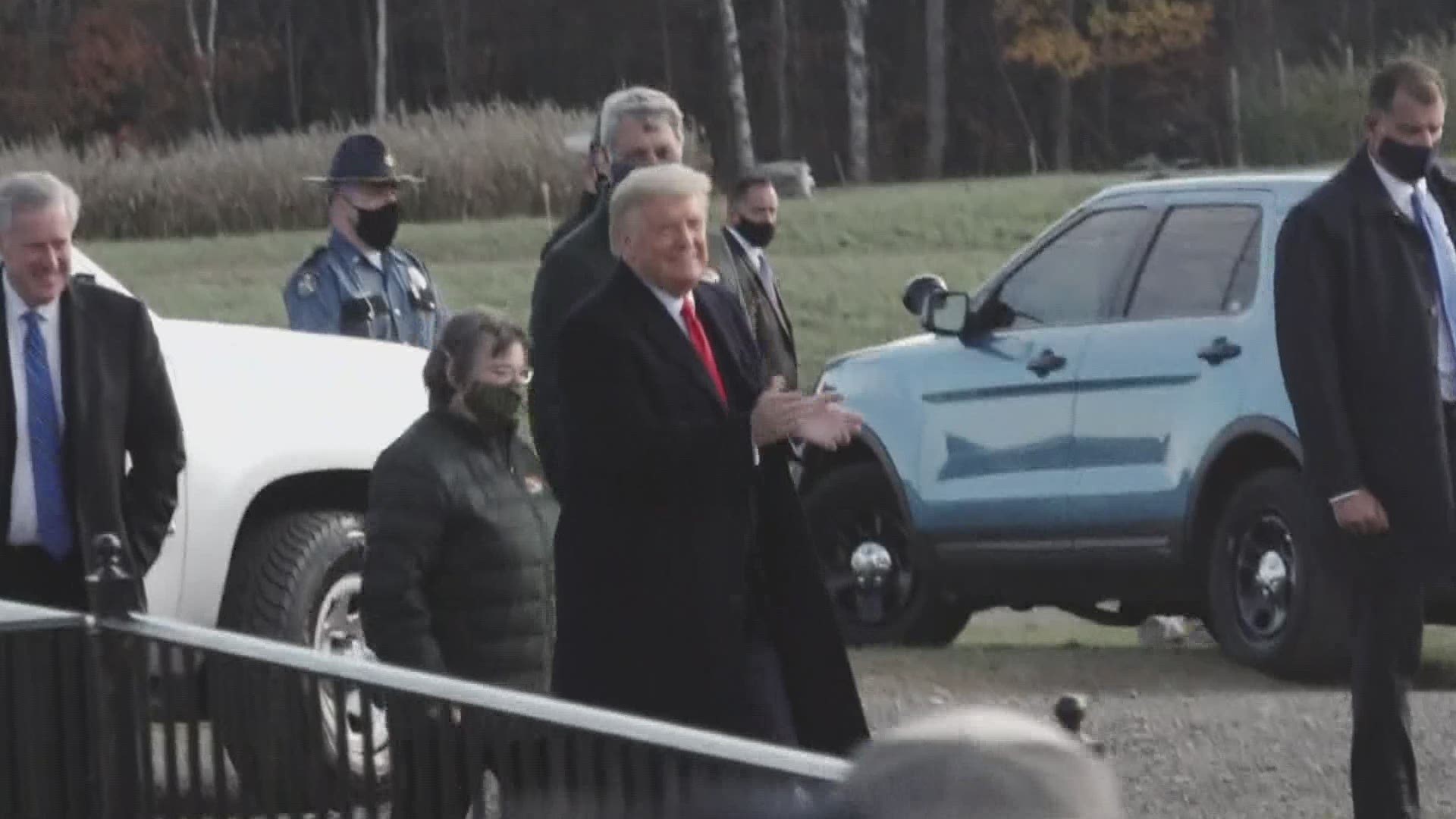 Hundreds and hundreds of people came out Sunday afternoon to Treworgy Family Orchards in Levant, with the hopes of catching a glimpse of President Trump.

The event caught most people by surprise, including the Treworgy family themselves.

In a Facebook post, the family said, "Late last night we received a call from the White House asking if President Donald Trump could visit our family farm during a small, unpublicized stop. Each day we aim to make America a little better by practicing radical hospitality, connecting people together, and to the land through agriculture. We extend that to each of our guests regardless of political persuasion or office. And so when someone asks if they can come to the farm, the answer is 'yes'. This event was not a rally and we are not endorsing any particular candidate, but we are honored to welcome a sitting president into our home."

John Kenerson is the CEO of the farm and told NEWS CENTER Maine, his orchard didn't host this event with politics in mind.

"We were asked by a sitting president if he could come and visit the farm and that's a great honor and we're open to do that so it's been an exciting day," Kenerson said.

While President Trump's detail all wore masks, very few were in the non-socially distanced crowd, well over Maine guidelines.

According to a campaign official, three thousand people were counted in attendance Sunday.

Earlier in the day, Governor Janet Mills had concerns about the lack of coronavirus enforcement at the event.

"I don't know what's going on. Who's organizing that gathering, how big it is, or what the parameters are. I will say if anybody does attend a gathering of whatever sort, whoever sponsoring it. Politics aside, because you know, this pandemic doesn't care about politics. There's no Democratic virus, a Republican virus, or a Green or Independent virus," said Mills.

"The virus doesn't care what your politics are it will hit anybody and everybody at any time, and the president of all people should know that. So I would advise anybody attending a gathering in excess of the limits that we've we've established that they get themselves tested. That they make sure, then they're not going to come with the virus or spread it to others knowingly or unknowingly spread it to others. That's the most important thing."

As President Trump worked his way around the barricades and to the people, the crowd chanted four more years. The crowd also moved as close as they could to get a glimpse of Trump.

After a few minutes of shaking hands and taking photos, President Trump moved to Treworgy's porch and addressed the crowd through a bullhorn.

"Hello everybody, thank you," said President Trump. "This is pretty nice. I want to thank you people; this is an amazing state."

Trump went on to focus on his executive order to open Atlantic Ocean waters to lobster fishing.

"We freed up 5,000 square miles of the (Atlantic) Ocean that they took away from you. They shouldn't have done that."

In Maine on June 5th to tour the Puritan Medical Products factory in Guilford, President Trump met with leaders of the New England fishing industry to announce that he would rescind future protections of the Northeast Canyons and Seamounts Marine National Monument.

Trump's embrace of the issue comes as U.S. officials have expressed concerns that China has fallen far short of its purchasing obligations under the initial trade deal, threatening Trump's promises to hard-hit farm industries.

President Trump mocked the idea of an ocean monument.

"You know who that (5,000 square miles) is a monument to? The former president."

Trump thanked the crowd for coming and asked Mainers to play their part on Election Day.

"It's the most important election in our history. It's an honor to be here; go out and vote.