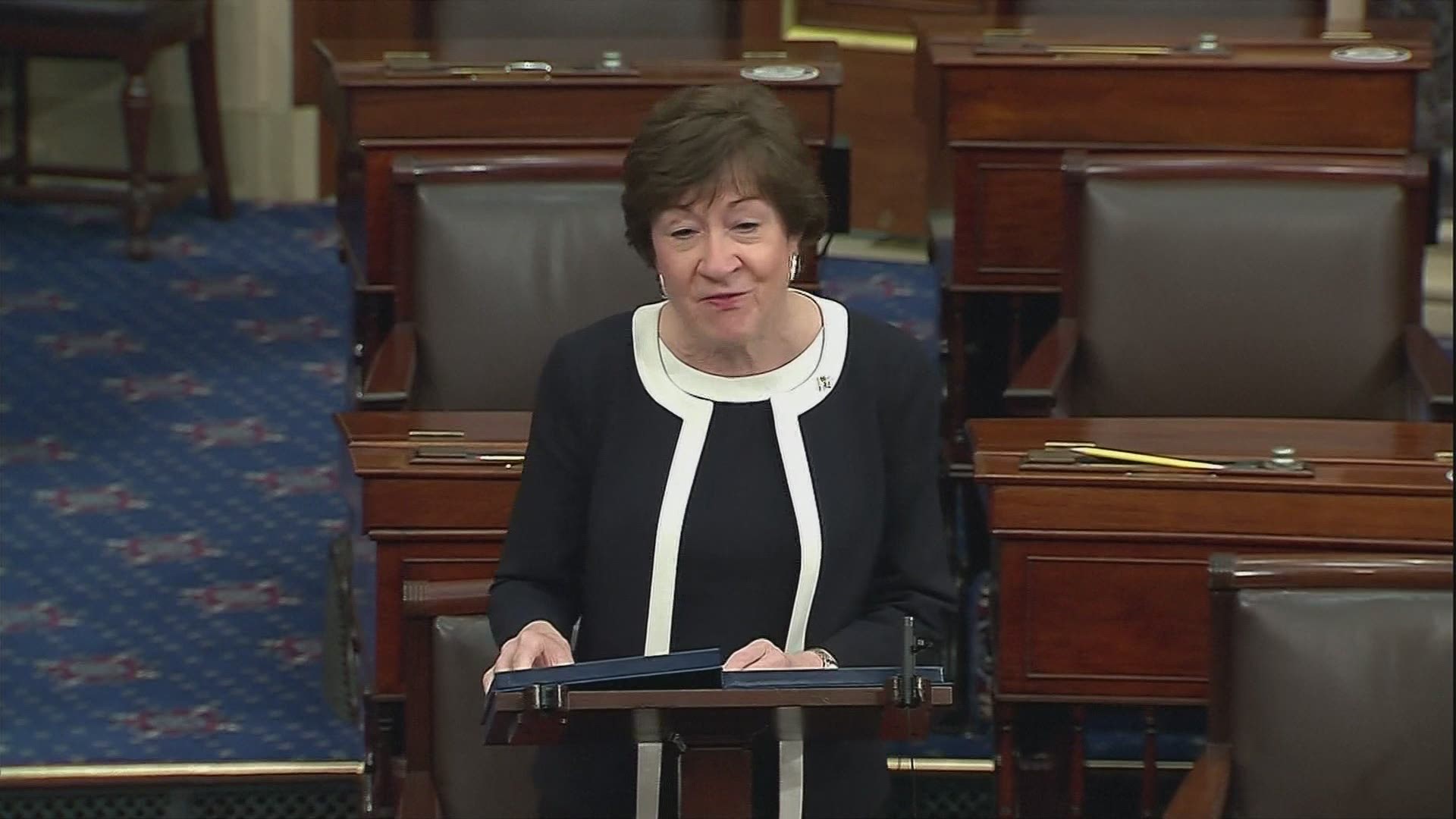 Collins was one of seven GOP senators to vote against their party in what is now being called the most bipartisan impeachment trial in our nation's history.

The heads of county Republican committees across the state were scheduled to meet Monday night to discuss how to "respond."

“I do know that a lot of people and are asking the GOP to do something," Helen Tutwiler, chairwoman for the Kennebec County Republican Committee told NEWS CENTER Maine. "What exactly that is, I’m not sure.”

Tutwiler said she was personally disappointed in Collins' vote against the former president, but would wait to "hear all sides" before making a final decision.

The Maine GOP has not yet released a formal statement in regards to the vote.

Executive Director Jason Savage confirmed Monday night's meeting Monday, but said any comment will wait "after matters are discussed by the county chairs."

NEWS CENTER Maine received several emails from angered constituents, including some who threatened to withhold future donations from the Maine GOP if it does not vote to censure, which is a formal statement of disapproval and essentially a public slap on the wrist.

However, it is unclear just what implications a censure by the 16 county chairs would have given that Collins was just re-elected to the U.S. Senate.

Collins defended her conviction vote on the Senate floor Saturday.

"My vote in this trial stems from my own oath and duty to defend the Constitution of the United States," she said.

All of them are now facing some kind of backlash from their state Republican officials who still remain loyal to Trump and still believe the election was somehow unfair.

Collins addressed that inevitable reality in her speech.

"‘Pres. Trump’s falsehoods convinced a large number of Americans that he had won and they had been cheated," she said.

So far, Cassidy and Burr have been censured by their states' Republican parties.

We condemn, in the strongest possible terms, the vote today by Sen. Cassidy to convict former President Trump. Fortunately, clearer heads prevailed and President Trump has been acquitted of the impeachment charge filed against him.

County chairs were told not to talk to the press about what happened at the virtual meeting Monday night.

“While the Maine GOP spends time deepening the divisions in their party, Democrats are focused on keeping people safe and making sure Maine’s economy bounces back strong,” Maine Democratic Party spokesperson Seth Nelson said in a statement to NEWS CENTER Maine.

After the impeachment vote Saturday, the Maine Democratic Party said Collins "was right to vote to convict," but that "she doesn't get a pass on the last four years where she was complicit in enabling a reckless president who damaged our democracy and America’s global reputation."

.@SenatorCollins must publicly reckon with her role in refusing to hold Donald Trump accountable before he incited a deadly siege that killed five people, including a Capitol police officer.

That’s the only way to close this dark chapter in our nation’s history. #mepolitics pic.twitter.com/0ukos5QVjd

Collins was not available for comment Monday, per her spokesperson.