A growing number of lawmakers, including Nancy Pelosi and Chuck Schumer, are calling on the Vice President to invoke the 25th Amendment and remove Trump from office. 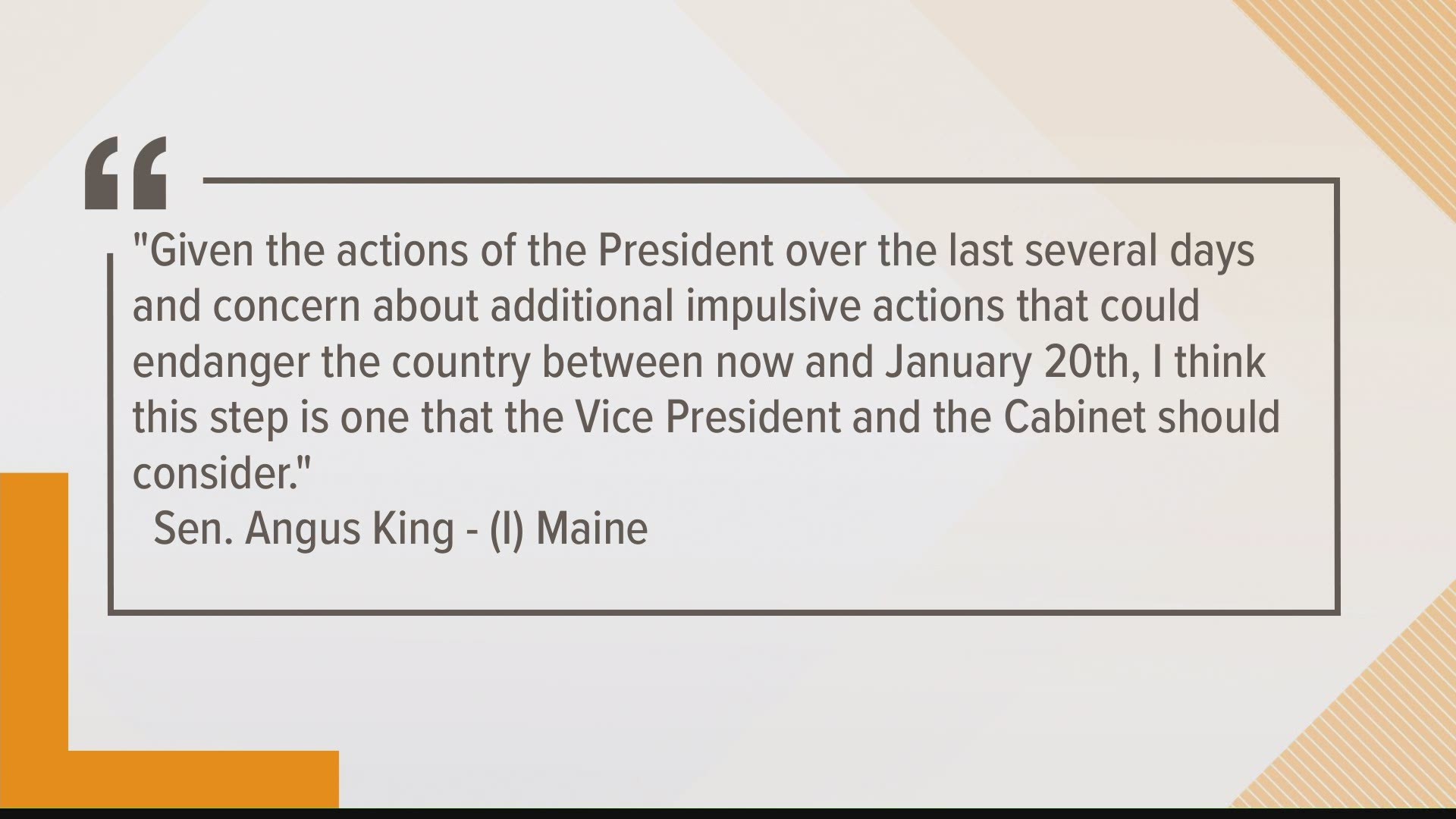 They join dozens of other members of Congress, including House Speaker Nancy Pelosi and Senate Minority Leader Chuck Schumer, who have publicly called for Trump's removal in the wake of Wednesday's violent insurrection at the Capitol.

In a statement shared with NEWS CENTER Maine Thursday afternoon, King said invoking the 25th Amendment is an unprecedented step and "a grave constitutional responsibility that should not be taken lightly."

Pingree shared a video message from outside the Capitol building Thursday morning, recounting the chaos that left four dead, and dozens injured and arrested. She said, "We need to impeach him, invoke the 25th Amendment, and remove him from office."

RELATED: VERIFY: Can the Vice President invoke the 25th Amendment to remove Trump?

At a press conference Thursday afternoon, Pelosi said "this is urgent" and Trump is a "very dangerous person" and needs to be removed before President-elect Joe Biden's inauguration.

Pingree said she is co-sponsoring two House impeachment resolutions, one presented by Rep. Ilhan Omar, and another by Reps. David Cicilline, Ted Lieu, and Jamie Raskin.

"If the Vice President and Cabinet do not act to remove this dangerous President with the 25th amendment, Congress must act," Pingree said.

I am cosponsoring *both* of these House impeachment resolutions.

If the Vice President and Cabinet do not act to remove this dangerous President with the 25th amendment, Congress must act. pic.twitter.com/9Atb1uGQzt

Maine Republican Sen. Susan Collins has so far been mum on the topic of the 25th Amendment. After Congress reconvened to finish certifying the Electoral College votes, in a speech on the Senate floor Collins condemned the violence and rejected the challenges to the votes.

Tonight, I voted to reaffirm the foundation of our democracy – the Constitution of the United States – and I rejected these challenges to the Electoral College.https://t.co/WD6qfmsdgN pic.twitter.com/Vpqa2Q4ifP

With less than two weeks remaining in President Trump's term, however, many are wondering if there's enough time to push forward articles of impeachment or invoke the 25th Amendment.

"I know that invoking the 25th Amendment is logistically possible," said University of Maine professor of political science Mark Brewer. "I know there are some other people talking about removing the president via the impeachment process. That I think would be logistically very difficult to see happening."

Brewer has been a political science professor with the University of Maine system since 2004, with research focuses surrounding political behavior, with specific research areas including partisanship and electoral behavior.

There's a lot of talk from Washington over a push from congress to remove President Trump from office through impeachment or the 25th Amendment. With less than two weeks remaining in Trump's term, I asked @UMaine prof. Mark Brewer if there's even enough time left @newscentermaine pic.twitter.com/s9V51Vrgqx

Brewer says the impeachment process can be a lengthy one, making it difficult to complete a full investigation and vote before the end of the term. He believes logistically, that invoking the 25th Amendment would be possible, but did not speculate on if it's something that may happen within this administration's cabinet.

"If the cabinet decided it was warranted, that could happen relatively quickly, within an hour or two. And even if the President did dispute, all of that could take place within a relatively short period of time," said Brewer.