Dale Crafts said 'it's pretty much over' after claiming a big victory in Lewiston. Eric Brakey conceded soon after, and Adrienne Bennett followed Wednesday morning. 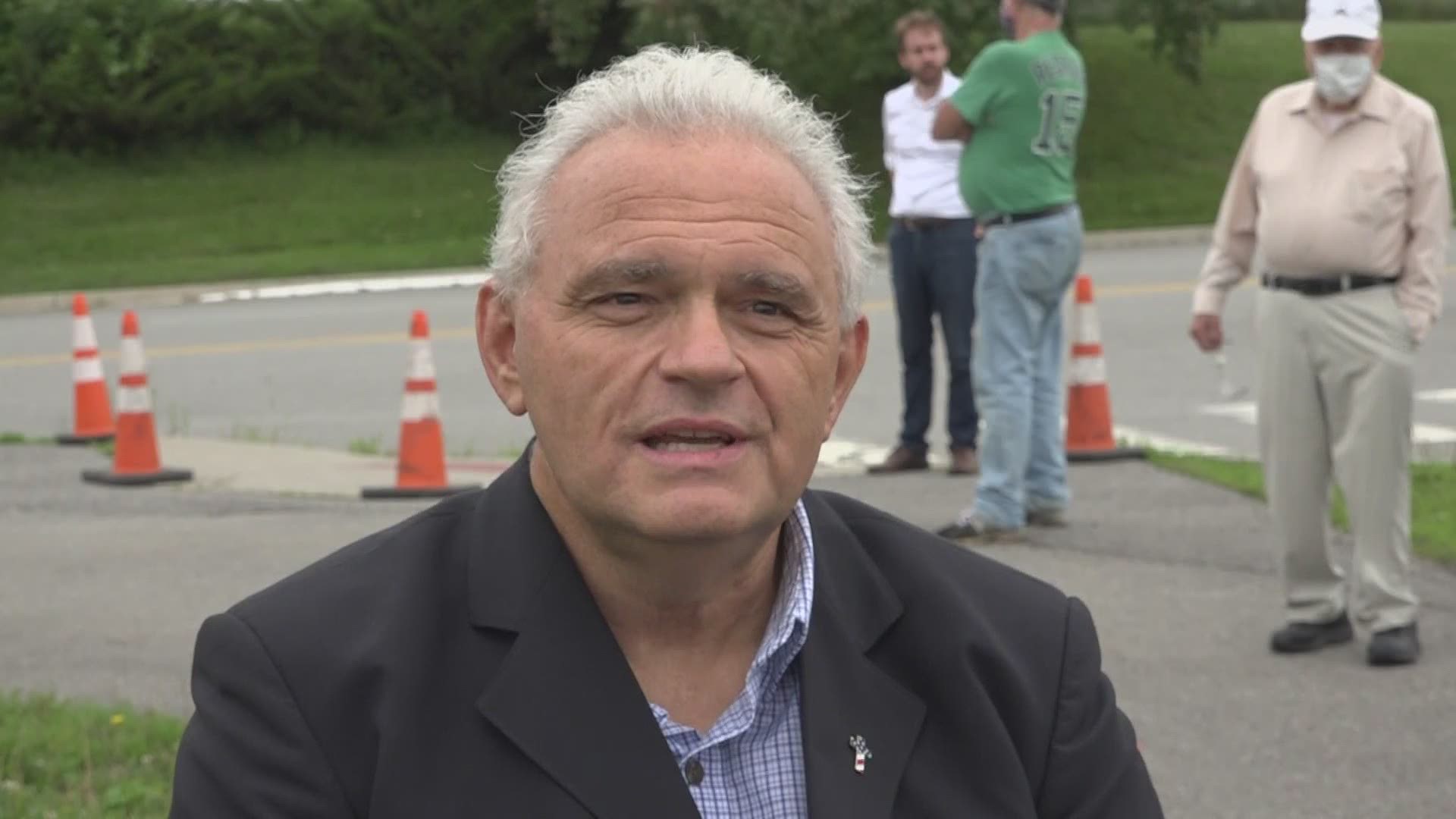 MAINE, USA — All three candidates for the Republican nomination for Maine's 2nd Congressional District seat held a press conference Wednesday morning. Both Eric Brakey and Adrienne Bennett had already conceded, and both reiterated their support for Dale Crafts during the press conference.

The winner needs 50 percent of the vote or the race will go into rank choice voting. Based on unofficial vote tallies reported so far from the municipalities in Congressional District 2, none of the three Republican candidates seeking the party’s nomination have achieved this threshold: Dale Crafts has 44.9% of the votes; Adrienne Bennett has 32.6% and Eric Brakey has 22.6%.

“I want to personally congratulate Dale Crafts on his victory last night. We may have disagreements on certain issues but there’s certainly far more that we agree on than we disagree," Brakey said at the press conference.

Later in the afternoon, however, Dunlap announced the tabulation of results will require the ranked-choice voting process. Ballot collection will begin Thursday throughout the 2nd Congressional District and the process of the ballot materials is scheduled to begin at 9 a.m. on Friday in the Burton R. Cross State Office Building, Dunlap said.

Secretary of State Department staff members must log, unlock and unseal each ballot box from hand-count towns to scan the ballots using a high-speed tabulator and log, unseal, and upload all the memory devices from tabulator towns and cities before loading all the votes into the results program and then certifying the results to ensure accuracy.

Dunlap says the official results are expected by Friday, July 24.

“Yeah, you could see a change, historically that has not proven to be likely," Dunlap said.

Dale Crafts spoke to the media Tuesday night after a 'landside' win in Turner and a big victory in Lewiston. He said, "it's pretty much over."

Today, we unite as Republicans. I spoke with @DaleCraftsME to congratulate him on becoming the Republican nominee for Congress. He has my full, 100% support. Mainers deserve a Congressman who reflects our values &that man is not Jared Golden, it is Dale Crafts. #mepolitics pic.twitter.com/mzCsgdyKhD

I am extremely proud of our campaign and team. We shattered expectations and mobilized a grassroots movement of Maine people who are sick of politics-as-usual.

Thank you to every single one of our supporters. Together, we will #TakeBackMaine and defend this great Nation.

RELATED: RCV Fight: Poliquin calls for 'new election' if judge does not rule against ranked-choice

Crafts held his election night party at Mason Excavation in Lisbon Falls. He arrived just before 8 p.m. on Tuesday night to greet supporters.

Crafts took an early lead and those in attendance at his event were excited every time a member of the campaign came out of the office to read new results.

All smiles here after the Crafts campaign just announced Dale Crafts has received 46% of the votes with 5% reporting. Worth noting Crafts and his supporters are not wearing masks #NEWSCENTERmaine pic.twitter.com/dY0qB5H6lg

Crafts was hoping to not have the election go into a runoff but said he's confident he will win in rank choice voting.

"If we just won tonight, even if it was a little bit, we felt we would win it with rank choice voting," Crafts said.

"We're very very encouraged. The numbers are way up, we think it's going to trend that way for the rest of the night," he added.

As Crafts was confident he would be the GOP nominee in Lisbon, Eric Brakey conceded up the road in Lewiston.

Brakey surprised supports by conceding the 2nd Congressional District race at about 10:30 p.m. He told his supporters via Facebook LIVE that he saw no path to victory. He added, if Dale Crafts agrees to support a position to bring troops home from Afganistan, he will get his support.

Eric Brakey outside of his campaign headquarters in Lewiston addressing the media. pic.twitter.com/3zEtV63AC0

Bennett did not address the media at any point during the evening, her staff told NEWS CENTER Maine they expect to go into a runoff with Crafts and for the race to be called at a later date.

"The hard part when you're running against your own republican friends, you know it's your own party. At least with Jared, there's quite a bit of contrast between us."

None of the three GOP candidates wore masks on primary day and few, if any of their supporters were masked.