Among the bipartisan group in attendance on the White House lawn Monday were Gov. Janet Mills and Sens. Susan Collins and Angus King. 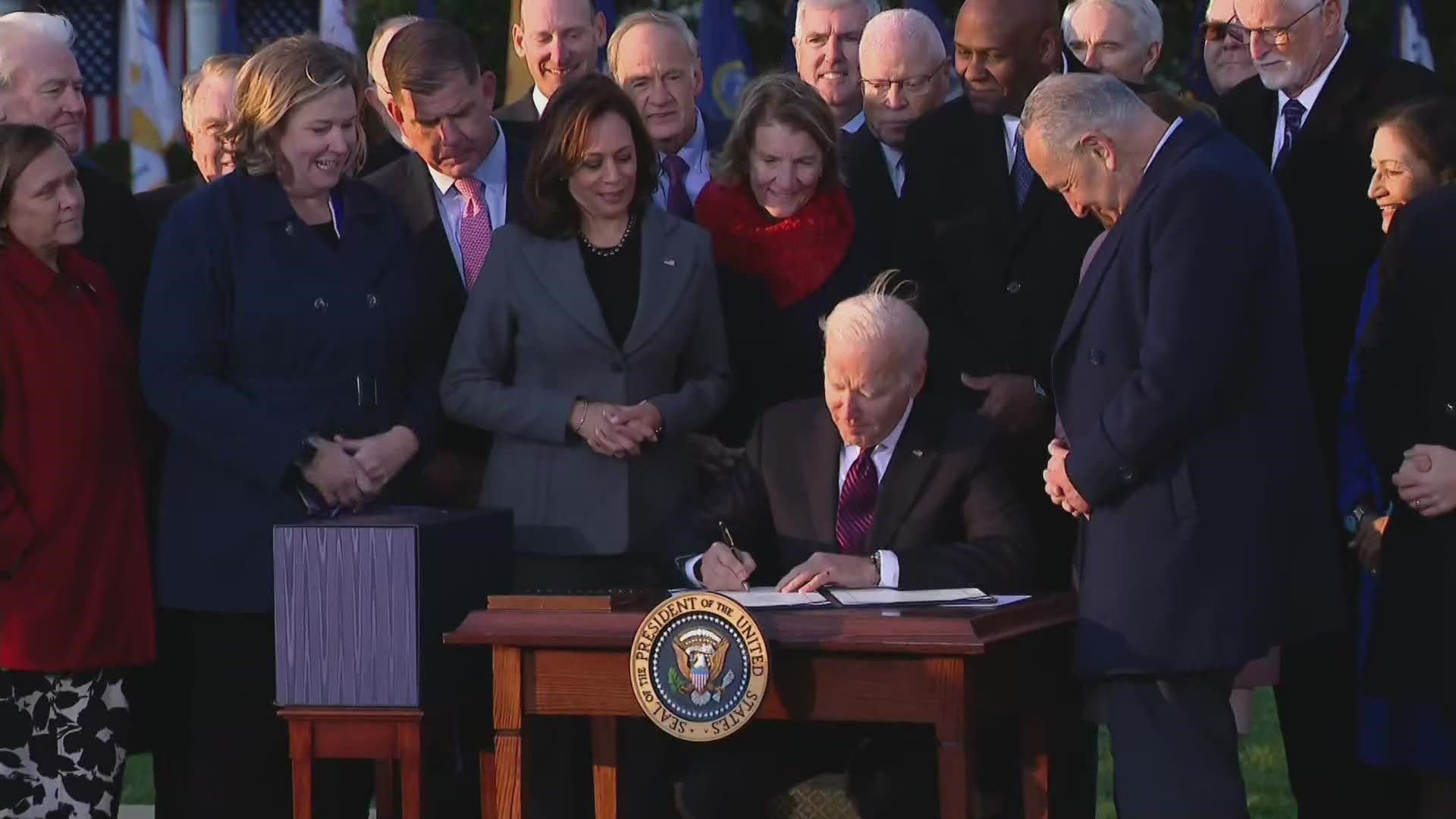 Biden held off on signing the hard-fought infrastructure deal after it passed on Nov. 5 until lawmakers would be back from a congressional recess and could join in a splashy bipartisan event.

The president has called the legislation "a once-in-a-generation investment" to tackle a range of challenges: crumbling roads and bridges, gaps in access to affordable internet, water tainted by lead pipes, homes, and cities ill-prepared to cope with increasingly frequent extreme weather conditions.

According to Mills' office, the deal will provide Maine with an estimated:

The White House is planning an aggressive sales campaign for the infrastructure bill, with Biden planning trips across the U.S., including New Hampshire on Tuesday, to speak about the impacts of the legislation.

In a statement following Biden's signature, King said in a statement that the deal will "have an immense impact on the day-to-day lives of Maine people across our state."

“The bipartisan Infrastructure Investment and Jobs Act is a once-in-a-generation investment in the infrastructure that powers our economy and ties Maine communities together,” King said. “From roads and bridges to water infrastructure and the electrical grid, these investments will create good-paying jobs and have an immense impact on the day-to-day lives of Maine people across our state."

“The bipartisan Infrastructure Investment and Jobs Act is a once-in-a-generation investment in the infrastructure that powers our economy and ties Maine communities together. From roads and bridges to water infrastructure and the electrical grid, these investments will create good-paying jobs and have an immense impact on the day-to-day lives of Maine people across our state. Above all, I’m thrilled by the package’s $65 billion in broadband funding. We’ve seen during the pandemic that an affordable, high speed broadband connection is a fundamental part of modern life, and these funds will go a long way to ensuring that every Maine person – no matter where they live – will be able to fully access the economic, education, and healthcare opportunities of the 21st century. It’s nearly impossible to capture just how much good this will do for the State of Maine – but in the months and years ahead, we will see the legislation’s impacts unfold before our eyes and throughout our communities. I’m deeply grateful for the partnership of all who helped enact this historic package into law; it is absolutely essential, and today we got it done.”

Collins released a statement after the passage of the law, saying now more than ever broadband is a need for all Americans.

“This infrastructure package is good for America. Earlier this year, I joined a group of 10 Senators—five Republicans and five Democrats—who were determined to break through the partisan gridlock and pass this long-overdue infrastructure investment for the American people. Months of bipartisan negotiations produced a truly transformational package for our country that will make the most significant investment in American infrastructure since the establishment of the Interstate Highway System in the 1950s. By working collaboratively and across the aisle, Congress demonstrated that it can deliver real results for the American people.”

“One of the many provisions that will have a significant impact on Maine is the largest-ever investment for broadband, which will provide our state with $300 million to expand high-speed Internet access to rural and unserved areas. i negotiated this section of the bill with Senator Jeanne Shaheen (D-NH), along with our colleagues and the Administration. It has become increasingly clear in recent years – and especially in light of the pandemic – that broadband is not a luxury, but a necessity.”

“This once-in-generation investment will help us fix our roads and bridges, expand high-speed broadband, improve access to clean drinking water, and build a cleaner, more sustainable transportation network – all while putting Maine people to work in good-paying jobs. With this transformational legislation and the unprecedented funding we dedicated through the state budget, Maine is on the right path to tackling our longstanding infrastructure problems and strengthening our economy. It was an honor to participate in the signing of this historic bill, and I thank the President and Maine’s Congressional Delegation for their work to get it done.”

Congresswoman Chellie Pingree was also in attendance on Monday.

"This new law shows that elected officials can still work together: Democrats, Republicans, and the White House all worked across the aisle to get things done for the American people.  Now it’s time to put this law to work creating good jobs and making groundbreaking investments in our nation’s roads, bridges, broadband, clean drinking water, and much more. It’s a big win for Maine and the entire country. This moment has been months in the making. Since Senator Collins and I met with fellow members of Congress, governors, and mayors at Governor Hogan’s residence seven months ago to develop the blueprint for this bipartisan infrastructure law, I have been proud to fight for this bipartisan effort. Washington too often gets caught up in political games and point-scoring, but it’s days like today—the result of months of quiet, hard work—that show we can still get important things done for the country.”

En route to the White House with my House Colleagues. Infrastructure week is officially here! pic.twitter.com/nOPgYHanoQ