Find live feeds and updates to both town halls here. 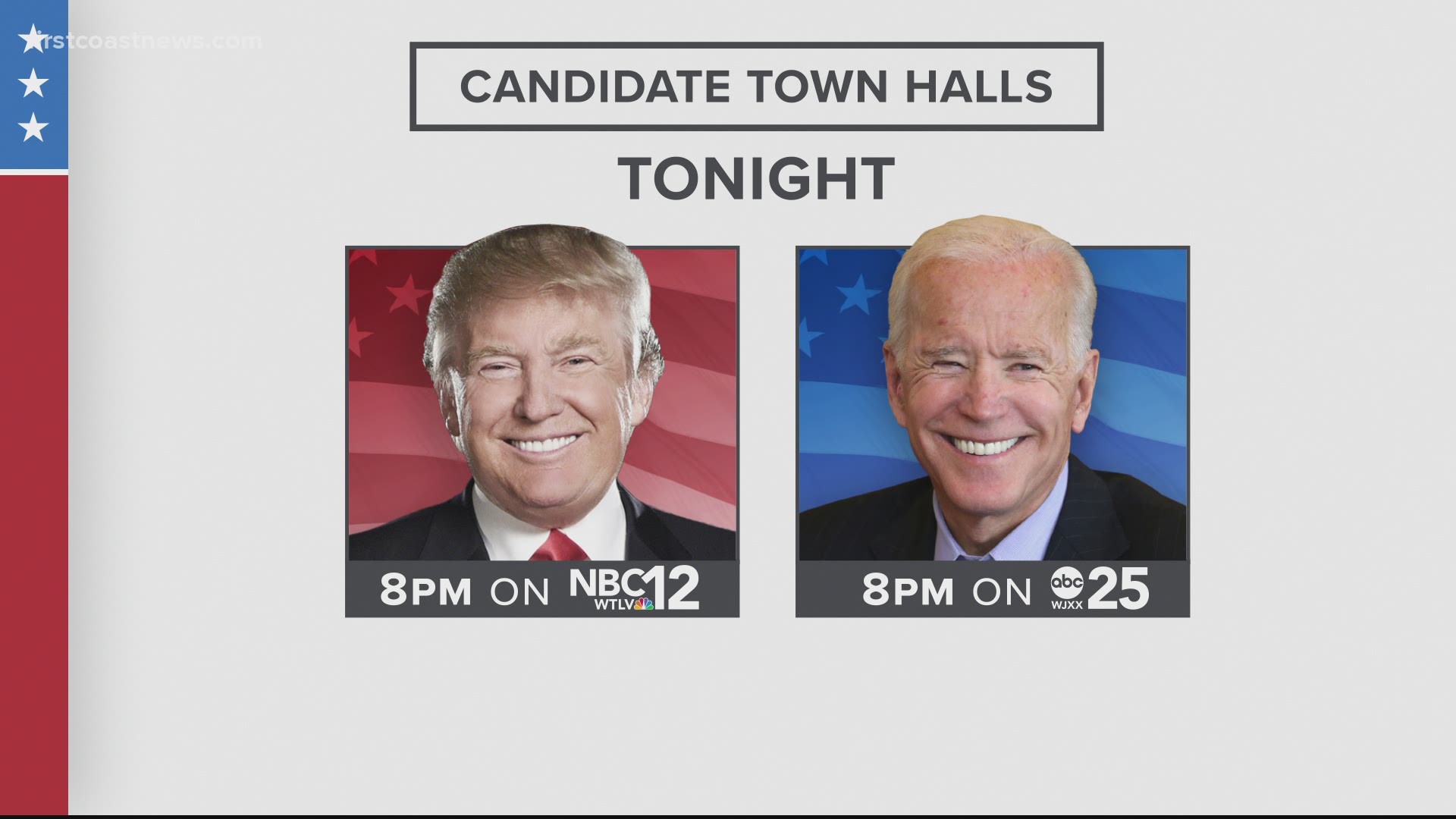 Trump's event, held in Miami, will air on NBC with host Savannah Guthrie from 8 p.m. to 9 p.m. ET. ABC is airing Biden's event, hosted by George Stephanopoulos in Philadelphia, from 8 p.m. to 9:30 p.m. ET. Both segments are town hall-style, meaning the candidates will take questions directly from voters.

Trump begins town hall with questions about his COVID diagnosis

Savannah Guthrie kicked off Trump's event by asking about his Covid-19 diagnosis and treatment in Miami, Florida. She also asked whether or not he got tested before the first presidential debate.

Trump said he was unsure whether or not he got tested for the coronavirus the day of the presidential debate, as was required by the debate commission. “Possibly I did, possibly I didn’t,” Trump said, adding that he gets “tested all the time.”

Trump said that he “didn’t feel good” or “strong” when he had the virus but he again refused to say whether or not he had pneumonia. His doctors have not answered questions about whether or not his lung scans showed signs of pneumonia.

Biden town hall kicks off with first focus on Covid-19

The ABC town hall with Biden has kicked-off in Pennsylvania. The second presidential debate was supposed to take place tonight, but since President Trump contracted Covid-19, the debate commission moved to a virtual debate, in which Trump refused to participate.

The first question was on Covid-19, with a voter asking how a Biden he would handle the pandemic compared to Trump, who has been criticized for his administration’s response.

Biden excoriated Trump for how he has communicated to the American people and a national, coordinated public health response and a nationwide standard to slow the spread.

George Stephanopoulos, who recovered from Covid-19 earlier this year, is moderating the town hall.

When asked whether he supported herd immunity, Trump responded: “The cure cannot be worse than the problem itself.”

Trump then launched into attacks against Democratic governors who implemented stay-at-home orders and closed businesses, including Michigan Gov. Gretchen Whitmer, who was recently the victim of a foiled kidnap plot. She has blamed Trump for being "complicit" in the vitriol against her.

Trump wrongly characterized a Centers for Disease Control and Prevention study when he claimed that "they came out with a statement that 85 percent of people who wear masks catch" the coronavirus.

That is an inaccurate read of a Sept. 10 CDC report — the study found that people who contracted Covid-19 are more likely to have eaten in a restaurant. The lead researcher says the research is actually “mask neutral” and that the data was based on self-reports and not designed to argue for or against mask wearing.

The CDC tweeted on Wednesday that “the interpretation that more mask-wearers are getting infected compared to non-mask wearers is incorrect.”

All the available evidence suggests that masks help slow the transmission of the coronavirus. A recent study published in the peer-reviewed journal Health Affairs showed that Covid-19 transmission slowed after states implemented mask requirements. Scientists believe this is because masks reduce the amount of respiratory droplets spread by the wearer.

While some masks appear ineffective at slowing the spread of the coronavirus (like very thin masks or masks with valves), the concept of masks is not up for debate. Trump has been criticized for not aggressively promoting the use of masks, and for refusing to appear in public wearing one until months into the pandemic.

Biden on Thursday said at the ABC town hall, "President Trump says things like, everything from ‘that's crazy stuff,’ then he walks away and says inject bleach in your arm and that's gonna work."

That comment is inference to Trump's suggestions that people should inject bleach in their arm to effectively fight off Covid-19.

Trump did indeed speculate that an injection of disinfectants like bleach could have a curative effect.

"And then I see the disinfectant where it knocks it out in a minute. One minute. And is there a way we can do something like that, by injection inside or almost a cleaning?" Trump said during a news conference at the White House in April, after a briefing from a Homeland Security official who described the ability of disinfectants like bleach to kill the coronavirus on surfaces.

Trump clashes with Guthrie after question about white supremacy

Trump came under fire in the last debate after he failed to denounce white supremacists and the Proud Boys.

“I denounced white supremacy for years,” Trump claimed, complaining that Guthrie and other people in the media keep bringing up the topic.

But Trump repeatedly dodged attempts to get him to condemn these groups that have expressed support for him, despite being given multiple opportunities to do so.

An undecided voter in this election, who voted for President Trump in 2016, asked Joe Biden about his running mate’s comments on taking a vaccine approved under the president.

Biden walked a tight line answering the question because Harris was criticized for undermining public health by making the remark. Biden continued to say he would trust doctors and public health experts, but noted that the president has made outrageous comments related to the virus and has also sowed seeds of doubt about treating it.

“What we’ve done has been amazing, we’ve done an amazing job,” Trump said on Thursday, claiming that the U.S. is “rounding the corner” with the pandemic.

Biden fact check: Have 1 in 5 minority businesses closed because of COVID-19?

Biden on Thursday said at the ABC town hall, "You had in one in five, one in six, minority businesses closing, many of them permanently" because of the Covid-19 pandemic.

This appears to be true — and Biden may be understating the closures.

According to a study conducted by Stanford University, more than 1 million black-owned businesses in the U.S. were open in February 2020. But by April, 440,000 black business owners had closed, a drop of more than 40 percent.

Trump on Thursday claimed that original projections for coronavirus deaths in America said the country would lose 2.2 million people to the virus.

“We were expected to lose, if you look at the original charts from original doctors who are respected by everybody, two million [and] two hundred thousand people," Trump said.

This is misleading. Trump is referring to a model published on March 17 by Imperial College London, which did predict that 2.2 million people in America could die from the virus, but only if no mitigation efforts whatsoever were in place.

In late March, White House Coronavirus Task Force response coordinator Dr. Deborah Birx told NBC's "TODAY" that the projection of 1.6 million to 2.2 million deaths referred to what could happen if America did "nothing" to stop the spread of the virus.

President Trump, during Thursday's NBC News town hall, once again accused the Obama administration of spying on his campaign — a claim that Trump has made on numerous occasions and remains false.

"They spied on my campaign and they got caught," he said, a reference to his claim about the Obama administration.

A review conducted by the Justice Department’s own watchdog deemed in December that the investigation into Russian interference in the 2016 election — a probe that deeply touched the 2016 Trump campaign — was justified.

The 434-page report by Justice Department Inspector General Michael Horowitz raised questions about the FBI's use of confidential human sources to gather information from individual members of the Trump campaign. FBI officials said it was a normal investigative technique, but the inspector general questioned whether there should be special guidelines when it comes to political campaigns.

The report did, however, clearly refute the notion that the FBI placed a "spy" in the Trump campaign.

The inspector general said he examined more than a million documents and interviewed more than 100 witnesses to reach the report’s conclusions.

Trump declines to name whom he owes money to

Trump was asked about the recent The New York Times report about his tax documents, which alleged that he's deeply in debt. Asked whom he owes money to, Trump declines to say whom or what he owes.

Trump claims that it is a small amount of money (he reportedly is on the hook for loans worth around $421 million), and also says that the number is wrong.

Biden given, and taking, plenty of time to answer questions

As voters ask Biden a question on a variety of topics, Biden has been able to answer the questions at great length with very little interference from the moderator.

Stephanopoulos has interjected and pressed Biden further, but the floor largely belongs to Biden as he interacts with voters.

It could be good prep to hone his answers for the next presidential debate a week from today.