LePage is telling state legislators they should make changes to the referendums passed by voters this month. 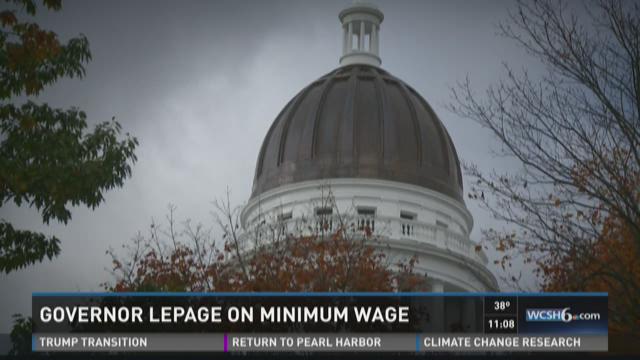 PORTLAND, Maine (NEWS CENTER) — Gov. LePage is telling state legislators they should make changes to the referendums passed by voters this month.

LePage was against all of the ballot measures and thinks some of them could hurt Maine's economy if they go into effect the way they're written.

At Easy Day, a bowling alley and lounge in South Portland, owner Chris Tyll said his servers make well above Maine's minimum wage, at least with tips. But Maine's new minimum wage law that goes into effect in January will eventually eliminate the tip credit. That means Tyll will have to pay tipped workers $12 an hour – no matter what – in 2024.

“We took the one industry that is a shining spot in our struggling economy," he said, "and it really changes the way we will have to do business in hospitality."

For Till, that means scaling back planned benefit packages, increasing menu prices and possibly cutting staff — none of which he wants to do. He isn't blaming voters for the problem.

“The Legislature needs to use the election cycle as a wake-up call,” he said. “Now get to work and do something for the state of Maine.”

Last week, LePage urged legislators to do just that and prevent problems like Tyll's. In a letter to lawmakers, the governor said the effects of Question 4 will devastate the restaurant industry, put local shops out of business and push 325,000 elderly Mainers deeper into poverty.

“This is something that was very clear,” Tipping said. “I don't think the governor should be going against the will of the people.”

Tipping said the law will still do more good than bad, and that Democrats in the legislature won't let LePage, or Republicans, change too much of the legal language.

“I don't think the Legislature is going to go back on the will of the people,” he said.

We won't know the answer to that question for another month. That's when lawmakers in Augusta sit down to deal with a growing to-do list.

Opponents of Question 2 withdrew their recount request Tuesday, so the passage of that tax surcharge will stand.

The recount for legalization of marijuana has been pushed back until next week.