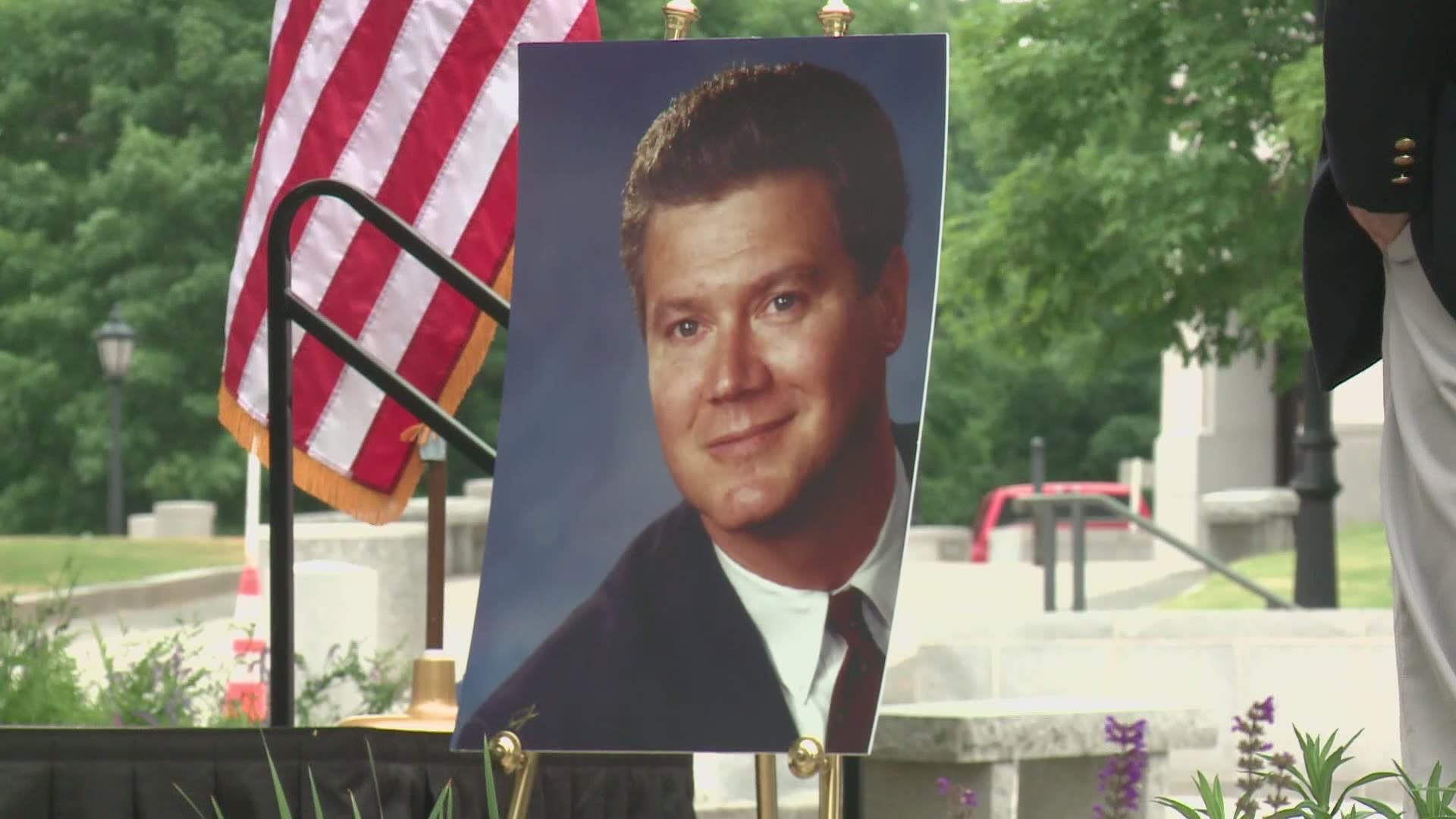 AUGUSTA, Maine — John Richardson always said he had deep family ties to Maine, and while he was born in Washington, D.C., Richardson made a name for himself at the Maine State House. So it was in a small park, almost in the shadow of the State House dome, where Richardson’s family and friends gathered Wednesday to pay tribute to the former Speaker of the House, who died suddenly last week at age 62.

With social distancing, a crowd of 50 was allowed inside the park, with many more watching from across a street or sitting in cars in the Legislative parking lot, listening on the radio.

Members of police and firefighter unions—which Richardson represented for years as a lawyer—escorted the hearse and then served as pallbearers.

“He was a good, good man,” said Mike Edes of the Fraternal Order of Police, a longtime friend of Richardson.

John Richardson served in the Maine House of Representatives from 1999 through 2006, including terms as Majority Leader and then Speaker of the House. He was then appointed Commissioner of Economic and Community Development by former Gov. John Baldacci. He ran for Governor in the Democratic primary in 2010 but ended the campaign before the party’s convention.

Baldacci praised Richardson at the memorial for caring about working people.

“I really admired the way John kept his touch with people. He never felt he was better than anyone else and he treated people with respect,” said the former Governor.

Since leaving government, Richardson had practiced law in Brunswick, been a real estate developer, and a political analyst for NEWS CENTER Maine’s weekly feature, Political Brew. Fellow analyst Phil Harriman, a Republican, gave a sometimes emotional tribute to Richardson, saying he was one of those who cared more about finding solutions than focusing on political party, and said that attitude was part of their commentaries.

“What endured was our commitment to use our political experiences and genuine friendship and respect for each other to help the people of Maine understand better how their government works,” Harriman said.

“How to be respectful in debate, how to use the opportunity in six-minute segments on live TV to educate and try to remove the toxicity in politics today.”

Richardson was also remembered as a devoted family man, a husband, and father of three. Son John Richardson, Jr., said his father was always supporting and encouraging him, his sister and brother and recalled a lesson learned from his own father, a fire chief,

“True public service comes from a place where you want to make things better than you found them, it's as simple as that.”

Harriman added a final comment for the family, using a quote from a 19th-century pastor and writer named J.R. Miller.

“Who said, ‘the only thing that walks back from the tomb with the mourner and refuses to be buried is the character of the man...’ The man John Richardson was a man of character and he’s left you a wonderful legacy to carry on.”