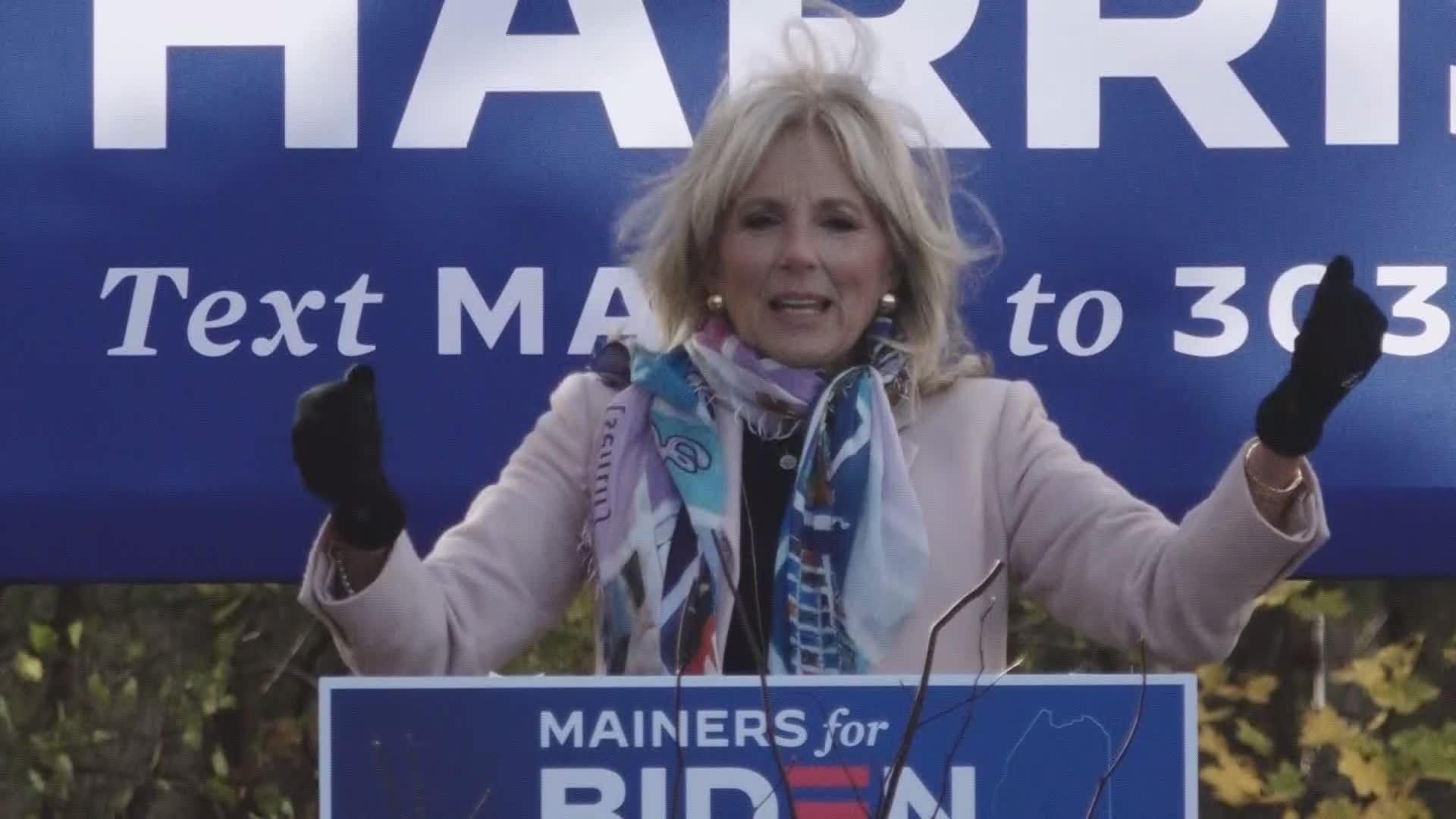 MAINE, Maine — In her second visit to Maine this election, Dr. Jill Biden headlined a "Get Out the Vote" rally in Bangor on Tuesday.

Maine prominent Democrats Gov. Janet Mills and Speaker of the House and U.S. Senate candidate Sara Gideon joined Dr. Biden for the rally. Mills and Gideon have both endorsed Biden for president.

The rally was socially distanced and focused on voting, which Mills applauded when she spoke about the Maine's handling of the coronavirus pandemic. Mills recently criticized President Donald Trump and Vice President Mike Pence for their campaign events in Maine this past week, which far exceeded Mills' gathering limits.

.@GovJanetMills applauds Maine’s response to the coronavirus pandemic. She compliments and encourages mask wearing and social distancing, even during an event like this one. She then calls @SaraGideon the best candidate Maine has had in a long time. pic.twitter.com/HPqcaiqvMz

Mills took shots at the Trump administration's response to the pandemic.

"Joe Biden has a plan for this pandemic," Mills said.

Now, Mills is taking shots at the Trump administration’s response to the COVID-19 pandemic. She says Mainers listen to health officials, while the President does not.

Dr. Biden lauded Mills' leadership in Maine before speaking about her husband's character and plan for America's future.

She is now asking the crowd to ‘picture Joe Biden’s America.’ Adding we would be led by an ‘honest Commander in Chief who we can trust.’ She then places more emphasis on the importance of voting.

Before ending the event, Biden asked the crowd to imagine 'Joe Biden's America.'

“When you go to bed that night you don’t worry about corruption and chaos in our government, you don’t think about our government at all because we are led by an honest commander in chief who you can trust, a president for all Americans," Dr. Biden added.

Dr. Biden campaigned in Orono and Blue Hill in September, where she focused on jobs, the economy, and health care.

The visit, one week ahead of Election Day, follows a visit my Kamala Harris' husband Doug Emhoff to Maine over the weekend.

Emhoff made two stops in Aroostook County Saturday afternoon for events in Presque Isle and Fort Fairfield. Emhoff met with potato farmers in Blaine "who have been affected by Trump’s trade war" and discussed Biden's "Build Back Better" plan before heading to Fort Fairfield for a "get out the vote" rally with local supporters.

The trip comes as President Donald Trump made an impromptu appearance in Bangor on Sunday after a rally in Manchester, N.H.

On Sunday shortly before Trump was set to land in Bangor, Mills and Gideon held a press conference condemning his visit.

"[Trump] has never grown in the job, he has never accepted counsel or to listen to other people, or to feel the pain of others,” Mills said. “Donald Trump does not care about you.”

Last week Mills also criticized Vice President Mike Pence for the crowd and lack of safety precautions at his rally in Hermon.

Maine has just four electoral votes, but both Trump and Biden are fighting for every vote possible. During his recent trip to Holden, Don Jr., expressed Maine, specifically the 2nd Congressional District, is important in the election because the state splits electoral college votes. Maine is one of only two states in the country that splits votes, rather than the "winner take all" practice the other 48 states adhere by.