Gideon casts ballot for Joe Biden in Freeport, slams Collins for not disclosing who she supports 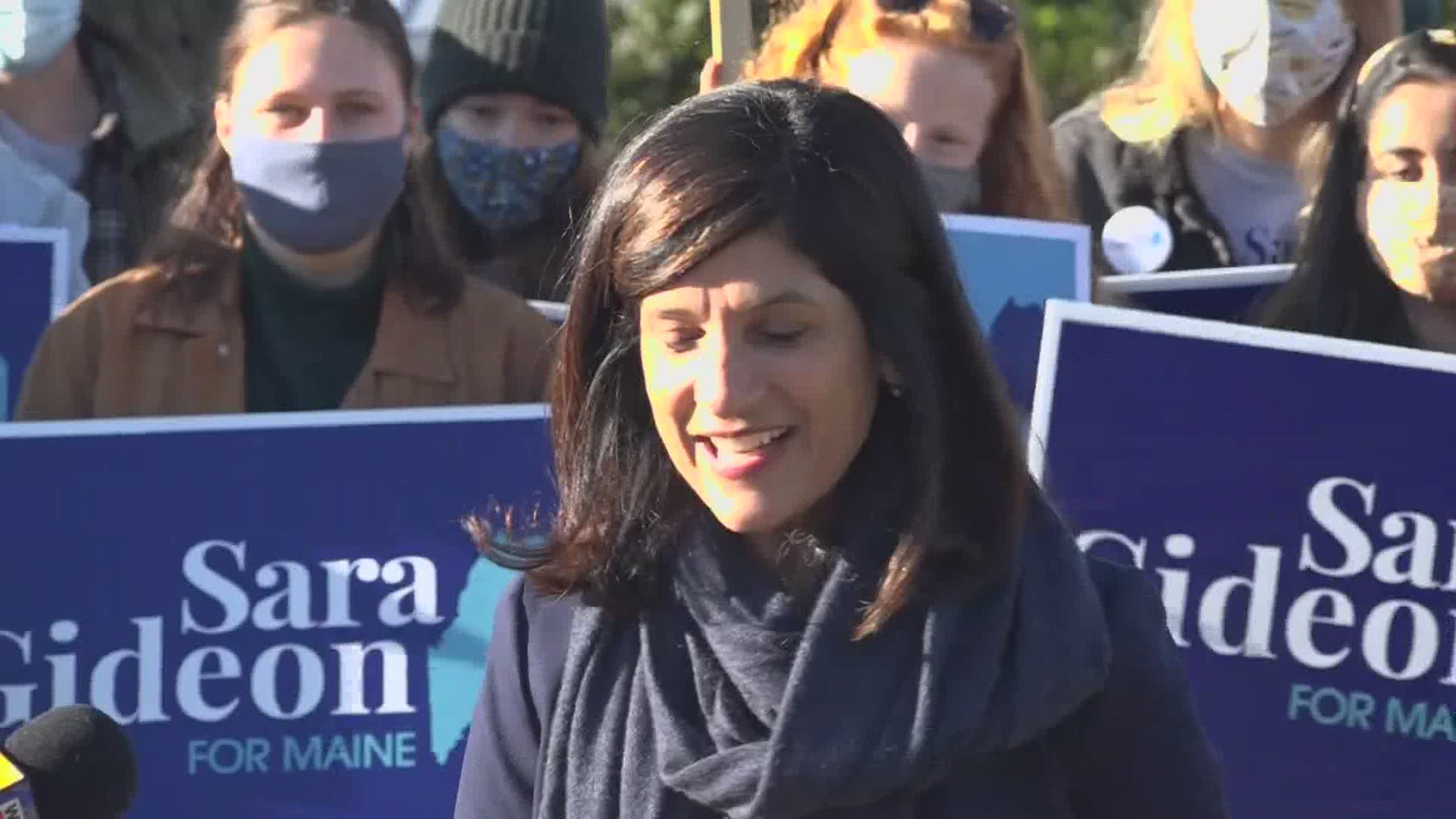 FREEPORT, Maine — With the election just 20 days away, the Democratic candidate in one of the most heated and watched races in the country cast her absentee ballot Wednesday in Freeport.

The latest polls show a tight race between Gideon and Collins, with Gideon leading by just one point.

"It will be a very close race," Gideon said in a press conference after casting her ballot. "What I would say to Mainers, is think about what you're voting as well as who you're voting for."

Maine will use a ranked-choice voting format in the General Election—marking the first time in U.S. history the process will be used in a presidential election. For the presidential and Senate races, voters will choose their candidates in order of preference by marking candidates as their first, second, third, and subsequent choices.

While Gideon and Collins remain the frontrunners, ranked-choice voting will give Independent candidates Lisa Savage and Max Linn a chance at siphoning votes away from the leading party’s candidates.

Unlike her opponent, it’s clear who Gideon cast her vote for in the presidential race: former Vice President Joe Biden. Biden endorsed Gideon in July, saying “We can't just go back to the way things were. We need to make progress on health care, the climate crisis, criminal justice reform, our courts, and so much more. And to do that, I need Sara Gideon in the U.S. Senate."

Gideon said she's "so honored" to have Biden's support in the race, and later made an appearance at the Democratic National Convention to voice her support to Biden and Sen. Kamala Harris.

So glad I was able to join @MaggieRogers in Scarborough and introduce her at the @DemConvention tonight! Together, we will elect @JoeBiden and @KamalaHarris, #FlipTheSenate, and elect Democrats up and down the ballot. https://t.co/0vpC9WaDLP

Gideon slammed Collins Wednesday for still not disclosing who she supports for president.

"We need real leadership," she said. "As a matter of fact, we wouldn't be in this place if we had real leadership. To me, for a 24-year senator who has always disclosed who she's voted for, I find it really startling that she won't do that now."

"As Speaker, she shut down the legislature more than 200 days ago and hasn’t done anything to help the people of Maine during a pandemic," Clark said. "She hasn’t helped small businesses and she has ignored the state's struggling unemployment insurance system that continues to delay benefits for Mainers, who are desperate for help."

Collins has maintained she is staying out of the presidential politics and focusing on her own race, despite being endorsed by President Donald Trump.

"My opponent refused to say who she was going to vote for in the Democratic primary until it was evident that Joe Biden was the nominee," Collins told NEWS CENTER Maine Wednesday.

The incumbent senator continued to distanced herself from Trump following a campaign stop at an engineering firm in Bangor, saying "we need more people who will bring us together not drive us apart," and promising to work with whomever is elected.

According to public voter record, a ballot has been requested and Mailed to Collins in Bangor, but has not yet been submitted.

"I want to be able to work very well to help the state of Maine in every way that I can, and I think they best was I can  accomplish that is by concentrating on getting reelected reelected for the people of Maine, but also not taking her side in the election."

Absentee ballots must be turned in to the municipal clerk by 8 p.m. on Nov. 3. If mailing your absentee ballot, voters are encouraged to put it in the mail no later than 7 days before Election Day—if later, drop it off in person or via ballot dropbox.