Everything you need to know about the Maine March 3 primary

Maine will hold its first primary in 20 years after switching from the caucus format last June. Here’s what you need to know before heading to the polls. 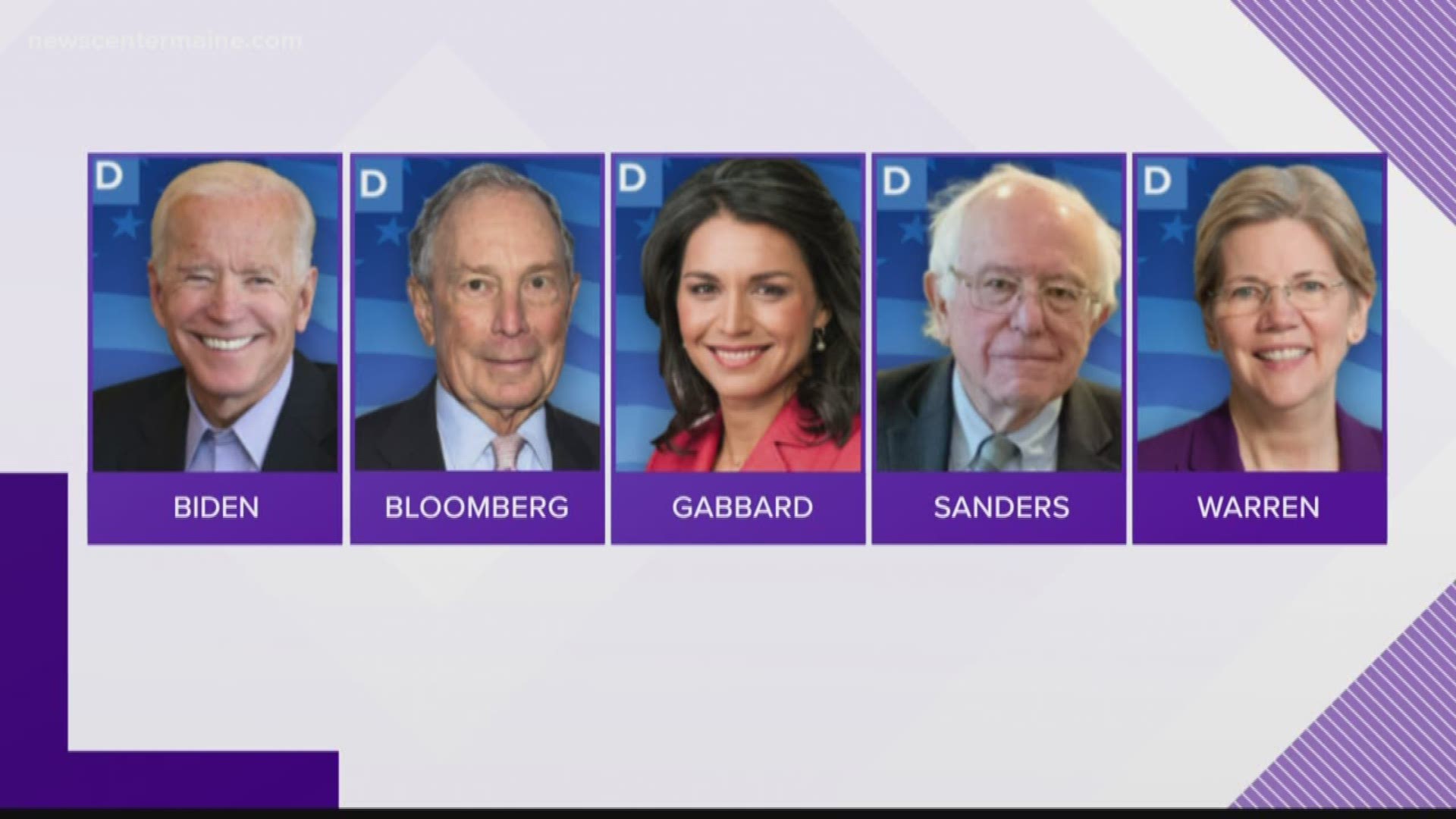 MAINE, USA — Following the Iowa caucus chaos and a comparatively seamless New Hampshire primary, Maine voters are glad they’ll be voting in a primary on March 3 and not a caucus for the first time since 2000.

The purpose of the primary is for voters to designate their preference for the nomination of their party’s candidate, according to the Maine Bureau of Corporations, Elections & Commissions.

President Donald Trump is the only candidate on the Republican ballot in Maine. While Former Massachusetts Governor Bill Weld is running against the President, Weld did not qualify for the Republican Primary in Maine. Republican voters will also have the opportunity to write in a name.

The Democratic Party ballot will have 12 names listed on the ballot, though some (Cory Booker, Deval Patrick, Marianne Williamson, Pete Buttigieg, Amy Klobuchar, Tom Steyer and Andrew Yang) have dropped out of the race. The active candidates are Joe Biden, Michael Bloomberg, Tulsi Gabbard, Bernie Sanders and Elizabeth Warren.

RELATED: Cory Booker drops out of the presidential race

For the Democratic Party, the Maine Primary will offer up an estimated 32 delegates, comprised of 24 pledged delegates and eight superdelegates; delegate allocation is proportional. The Republican Party has an estimated 22 delegates in Maine. The delegates will vote at their party’s convention in Milwaukee, Wis., and Charlotte, N.C. respectively, to select their nominee.

The deadline to change party affiliation was Friday, Feb. 14 and you can only vote for the candidates registered with your party. If you identify as an Independent, you can still vote, but you’ll have to register with one of the parties.

RELATED: If you're a registered 'Green Independent' and want to vote in Maine's presidential primary you can, here's how

There is no cut-off date to register to vote in person at your town office or city hall, but if you want to register by mail or through a voter registration drive, the deadline was Feb. 11.

If you are not registered to vote, you can do so on the day of the primary at your polling place, determined by your address. You’ll need to provide proof of identity and residency with a driver’s license, ID card, passport, paycheck, or utility bill with current address listed. Maine does not require proof of citizenship.

In addition to the Presidential Primary election, Mainers will vote in the Special State Referendum: A People’s Veto petition to prevent a vaccine law from taking effect. The law petitioned is, “An Act to Protect Maine Children and Students from Preventable Diseases by Repealing Certain Exemptions from the Laws Governing Immunization Requirements.”

Ballot questions often confuse voters because of the language. On the ballot, the question will read, “Do you want to reject the new law that removes religious and philosophical exemptions to requiring immunization against certain communicable diseases for students to attend schools and colleges and for employees of nursery schools and health care facilities?” You simply vote ‘yes’ or ‘no.’ In this case, you’re voting to: ‘yes—veto the law’ or ‘no—allow it to take effect.’

The Special Election for State Representative District 128 will also be on the primary ballot. Here is the candidate list for the seat vacancy.

If you're in Portland, you'll see 'Question A' on your primary ballot, which asks voters to decide on expanding rank choice voting. As it currently stands, ranked-choice voting will be used both in Maine's 2020 U.S. Senate race and in the 2020 U.S. presidential election.

Polling places across the state will vary in start times, ranging from 6 a.m. to 10 a.m., but all polls will close at 8 p.m. People in line at the time the polls close will be able to vote.

If you can’t make it to the polls on March 3, Maine allows absentee and early voting options. If you’re a uniformed service or overseas voter, for example, you would want to take advantage of this option. However, Maine is one of 28 states that allows any citizen to cast an absentee ballot, meaning an excuse for why you can’t vote in person isn’t required.

It’s free to request an absentee ballot, but all ballots must be received by no later than 8 p.m. on election day, March 3.

The next Maine election will be June 9 for the State Primary. The state election primary is to determine each party’s qualified candidate nomination for federal offices, other than the president, as well as state and county offices. Candidates elected in the state primary will appear on the general election ballot in November.

NEWS CENTER Maine wants to know what election issues you care about most. Since we've shared a poll, health care is the leading issue our readers care about the most, with 54% of the vote. Environment and climate change trails close behind with 43%, and taxes and the economy is in third with 41%.

People voted for military and defense as the least important issue, with 21%, and gun control with 15%.

Let us know what you think, by taking the poll:

RELATED: The candidates are coming! Democratic efforts ramp up in Maine this weekend