'Trump Tour' rolls through Maine, campaign says state is 'absolutely in play' for a Trump victory

Maine's 2nd Congressional District continues to be heavily campaigned with less than a week to go until Election Day. 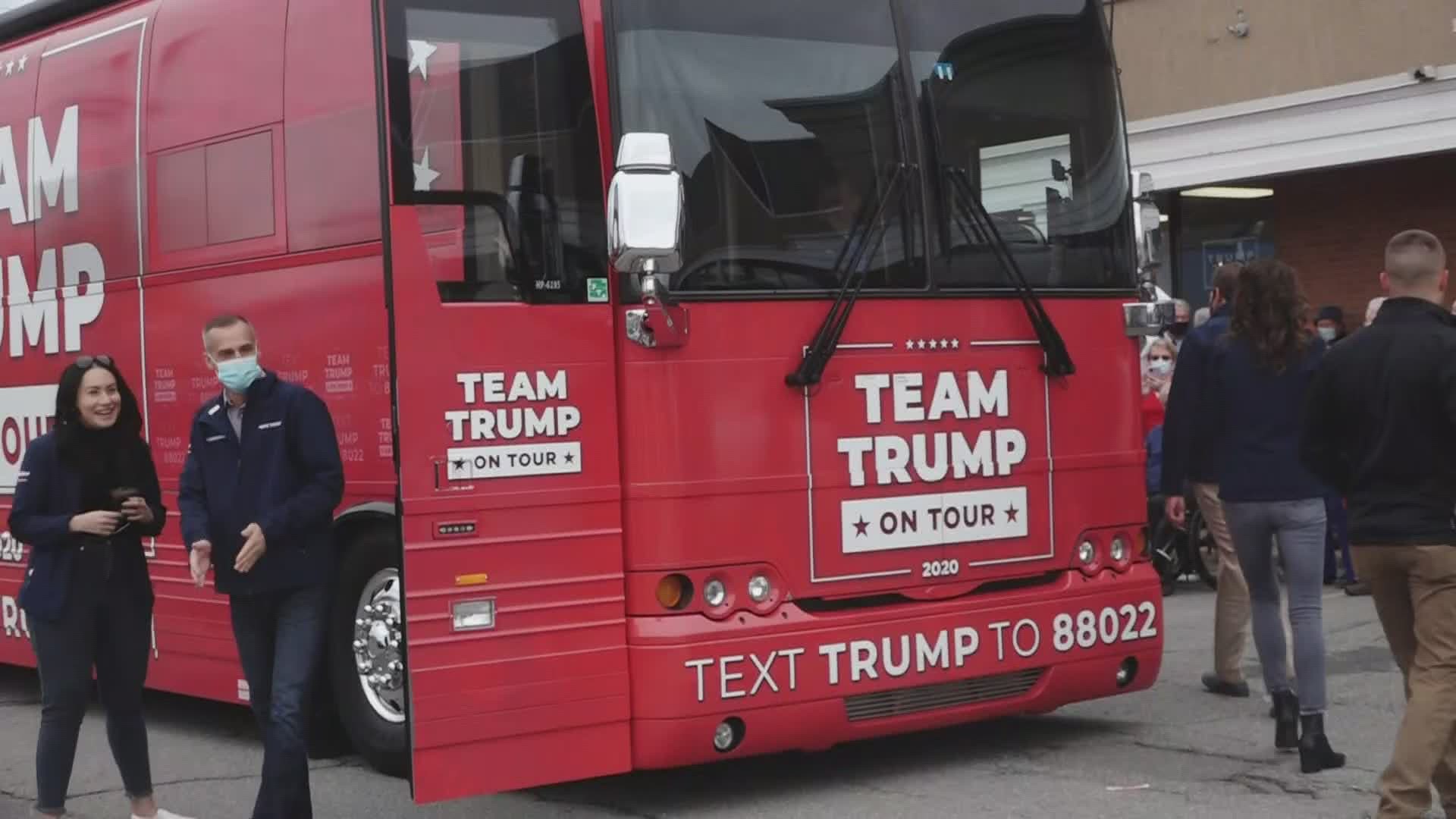 BANGOR, Maine — It may have been a chilly Wednesday morning in Bangor, but the presidential campaigns are heating up with less than a week before Election Day. Mainers in the state's 2nd Congressional District gathered outside the Maine Trump Victory office in Bangor for the first stop of the "Team Trump on Tour" bus tour.

The bus tour will make a stop in Gorham Wednesday afternoon with the addition of former acting White House Chief of Staff Mick Mulvaney.

With just days until the election, the three speakers urged the crowd to vote and get everyone they know to do the same. Before the event, NEWS CENTER Maine sat down with Governor Noem, Hicks, and Lewandowski to talk about the state of the race here in Maine.

During the Bangor stop, a man was arrested by Bangor Police after pulling a weapon on a security guard following the bus tour.

RELATED: Man arrested after pulling a weapon on security at Trump campaign event in Bangor

“Look, the state of Maine is absolutely in play for the campaign," Lewandowski said referring to the thought of President Donald Trump winning all four of the state's Electoral College votes.

Great stop this morning with @TommyHicksGOP and @KristiNoem at the Trump Victory Field Office in Bangor, ME!

Thank you to all the volunteers who came out to cheer on @TeamTrumpOnTour! pic.twitter.com/xcVOXdcM9p

“I made very different decisions than the Governor here in Maine," Noem said. “I would remind [Mills] that she overstepped her authority, Governor’s do not have the authority to put in the mandates that she did.”

Noem disagreed with Mills' mask mandates, the definition of essential business, and all safety measures the state took which, she said, resulted in the closure of businesses in Maine.

The Governor joined the bus tour in Maine while her own state is seeing more daily cases of the coronavirus since the pandemic began in the U.S.

During a coronavirus briefing on Wednesday, Mills responded to Noem's comments, saying "I don’t think she's in a good position to give us advice."

Noem told the crowd she is thankful to have Trump in the White house so she was able to lead her people the way she did. She added that not one business was shut down due to the pandemic, no mask mandates were ordered, and the definition of essential business was never made.

Mills has criticized Trump and his administration for the handling of the coronavirus and rallies the campaign continues to hold, disregarding coronavirus safety precautions.

"[President Trump] has miserably failed to get this pandemic under control and [the United States] has the worst record of any country when it comes to handling the pandemic," Mills said Sunday ahead of Trump's visit to Maine. “He has never grown in the job, he has never accepted counsel or to listen to other people, or to feel the pain of others. Donald Trump does not care about you.”

The president and his family have been no strangers to the Pine Tree State. Trump made a 'surprise' visit to Treworgy Family Orchids in Levant Sunday, and his son, Donald Trump Jr., held a 'Make America Great Again' rally in Holden last month. Don Jr. will be holding a similar event in Bangor this Thursday.

In 2016, Trump won one of Maine's four electoral votes, the lone tally coming after winning the popular vote in the state's 2nd District. It was the first time Maine's electoral votes were split since this system was adopted in 1972.

“I think all four electoral votes are in play this time," Hicks said. "We’ve never seen people go out and swarm the country like we’re seeing right now.”

With the president and former Vice President Joe Biden attending rallies and events across the nation, Maine has played host to more than just a few.

Massachusetts Sen. Elizabeth Warren stopped in Lewiston last month, Biden's wife Dr. Jill Biden was in Orono and Blue Hill last month and returned to the 2nd District on Tuesday for a 'Get Out the Vote' rally in Bangor.

“Look at the unprecedented investment Joe Biden has made in this state," Maine Senior Advisor for the Biden campaign Spencer Thibodeau said at Dr. Biden's event Tuesday.

As final polls and Electoral College predictions come out, Thibodeau echoed the same level of confidence as those across the aisle.

“Every electoral college vote matters," he said about recent campaign stops in Maine. In 2016, Hillary Clinton won the popular vote in Maine and in the 1st District, giving her three total electoral votes.

Colby College released its final poll of the 2020 Election cycle on Wednesday. Among a full sample of likely Maine voters polled, 31 percent were Democrats, 27 percent Republicans, and 42 percent were listed as Independent or "other."

Statewide, the poll gives Biden 51 percent and Trump 38 percent of the votes.

Among 2nd Congressional District voters, Biden recorded 46 percent with Trump taking in 42 percent of the district.

Based on that poll, the Biden campaign would collect all four electoral votes from Maine.

"While the Trump campaign spins their wheels to explain away Trump’s appalling response to the pandemic which has taken the lives of more than 225,000 Americans, his crusade to terminate the Affordable Care Act and with it the health coverage of more than 100,000 Mainers, and his failed trade war with China that’s toppled vital Maine industries and wrecked our economy, Maine voters are tired of waiting for answers," Roberts continued. "They’re ready to elect Joe Biden.”

“Whether it is the First Family, his closest advisors, the Vice President, or the President himself, Mainers have shown up in in droves to have the opportunity to meet with the Trump campaign."

"While Joe Biden has all but abandoned the people of Maine, President Trump continues to send his top people to meet the people of Maine," Kouzounas said in a statement. "Whether it is the First Family, his closest advisors, the Vice President, or the President himself, Mainers have shown up in in [sic] droves to have the opportunity to meet with the Trump campaign."

Kouzounas said, "On behalf of the people of Maine, thank you Governor Noem, RNC Co-Chair Tommy Hicks, Corey Lewandowski, and Mick Mulvaney, for taking the time to travel the state and meet the great people of our state."