The Maine Superior Court ruled against the Alliance for Retired Americans' lawsuit that alleged vote by mail requirements were 'burdensome.' 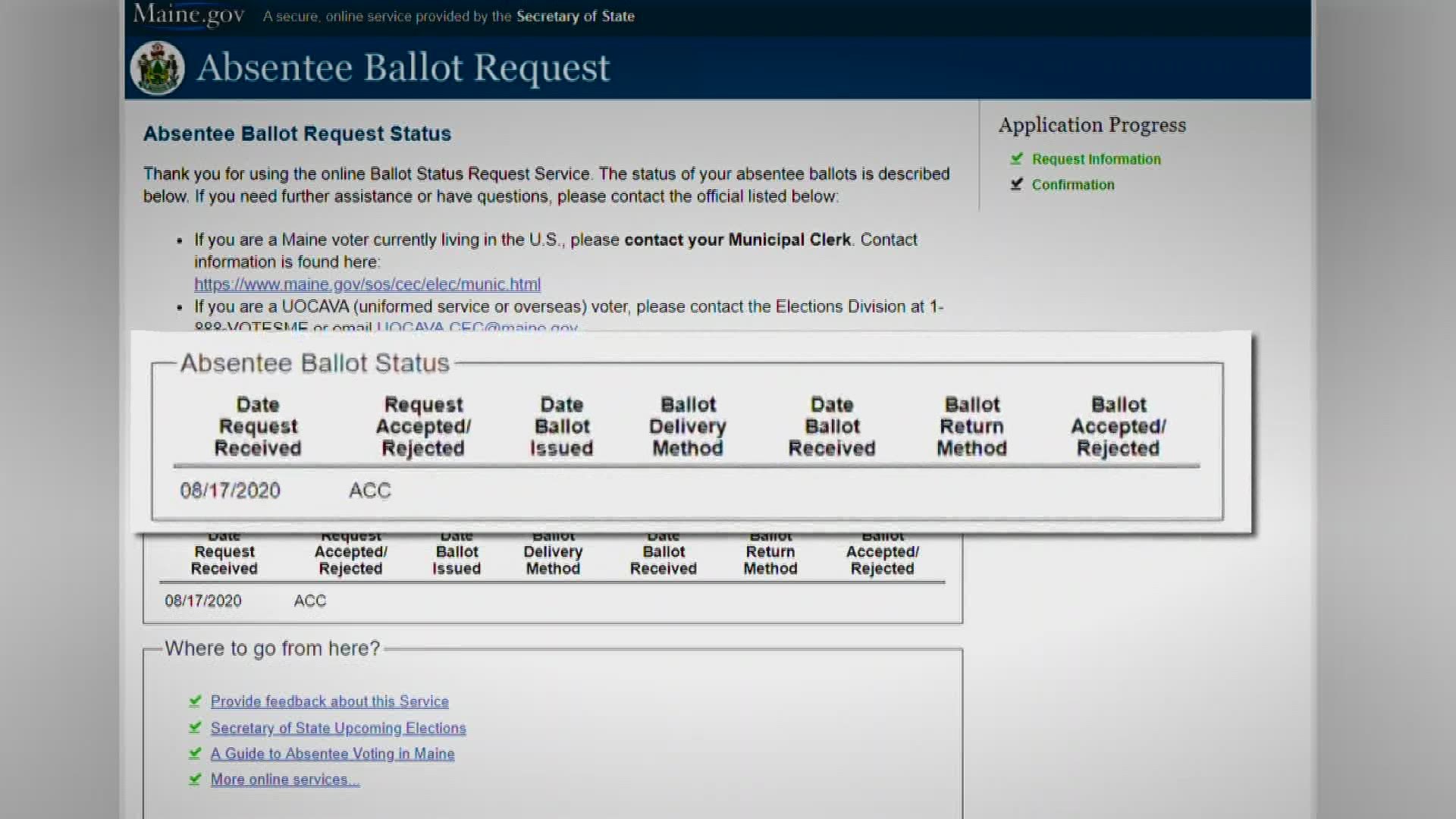 AUGUSTA, Maine — The Maine Superior Court ruled in favor of the Secretary of State's Office in a case aimed at extending the absentee voting deadline and other changes to voting protocols in the upcoming election.

The Alliance for Retired Americans (ARA) filed the lawsuit in Maine Superior Court in June in light of the COVID-19 pandemic's impact on voting and changes to the U.S. Postal Service.

The lawsuit alleged that the state's vote by mail requirements were "burdensome" and would "force older voters to choose between protecting their health or casting a ballot they know will be counted."

ARA sought to have the court force the state to eliminate the requirement for voter identification for registration, allow a third party to submit ballots on another person's behalf, and ensure ballots postmarked by Election Day are counted.

"The state’s onerous absentee ballot measures make it impossible for older residents of Maine to cast a mail-in ballot and be confident it will count," the organization said in a press release.

State law currently requires that all ballots be in the hands of local election officials by 8 p.m. on Election Day in order to be counted.

The judge ultimately sided with the state, saying "the harm to the State's electoral process outweighs the minor burdens imposed by those laws on the right to vote."

"This is a bit of a relief for us," Sec. Matt Dunlap told NEWS CENTER Maine. "We certainly share the plaintiff's concerns, but we feel very confident in our ability to work with towns to ensure that every ballot be turned in and counted accurately."

The ARA filed an emergency appeal to the court's decision Wednesday afternoon, asking Maine's highest court to mandate that:

“The Alliance does recognize that the Maine Secretary of State has taken two steps toward making it easier for seniors to vote in the general election," the ARA said in a release. "Providing voters an opportunity to cure ballots with mismatched signatures, missing signatures, and incomplete affidavit information by 8 PM on Election Day is positive, but falls short of requiring local elected officials to notify voters if there is a problem."

The ARA said, “We also appreciate that the state will pay for a ballot drop box for any town which requests one. These drop boxes give voters who choose to vote absentee another option to deliver their ballot. Already, 70 requests for drop boxes have been made.”

In response to the ruling, Maine GOP Chair Demi Kouzounas the decisions is "another major victory against Democrats' ploy to chip away at the integrity of our elections, and we have a message for any group that wants to undermine our voting rights: we will fight back, and we will win."

"Maine’s laws on absentee voting have been clear for generations, attempting to change the rules less five weeks out from a Presidential Election is simply the Democrats’ latest in a long line of attempts to erode away our rights as voters by instituting the elimination of voter identification requirements for voter registration and allowing practices like "ballot harvesting" in Maine," Kouzounas said. "Other attempted changes were the elimination of identification requirements, allowing ballots to come in after election day, and allowing online voter registration without identification."

Kouzounas continued, "at Maine GOP we don’t believe in making voting harder for Americans, but we do believe in securing the vote for all Americans, and protecting our right to a fair election."

Ballots have already been printed and distributed to cities and towns across the state.

Early voting and absentee voting in many municipalities will start as early as next week.