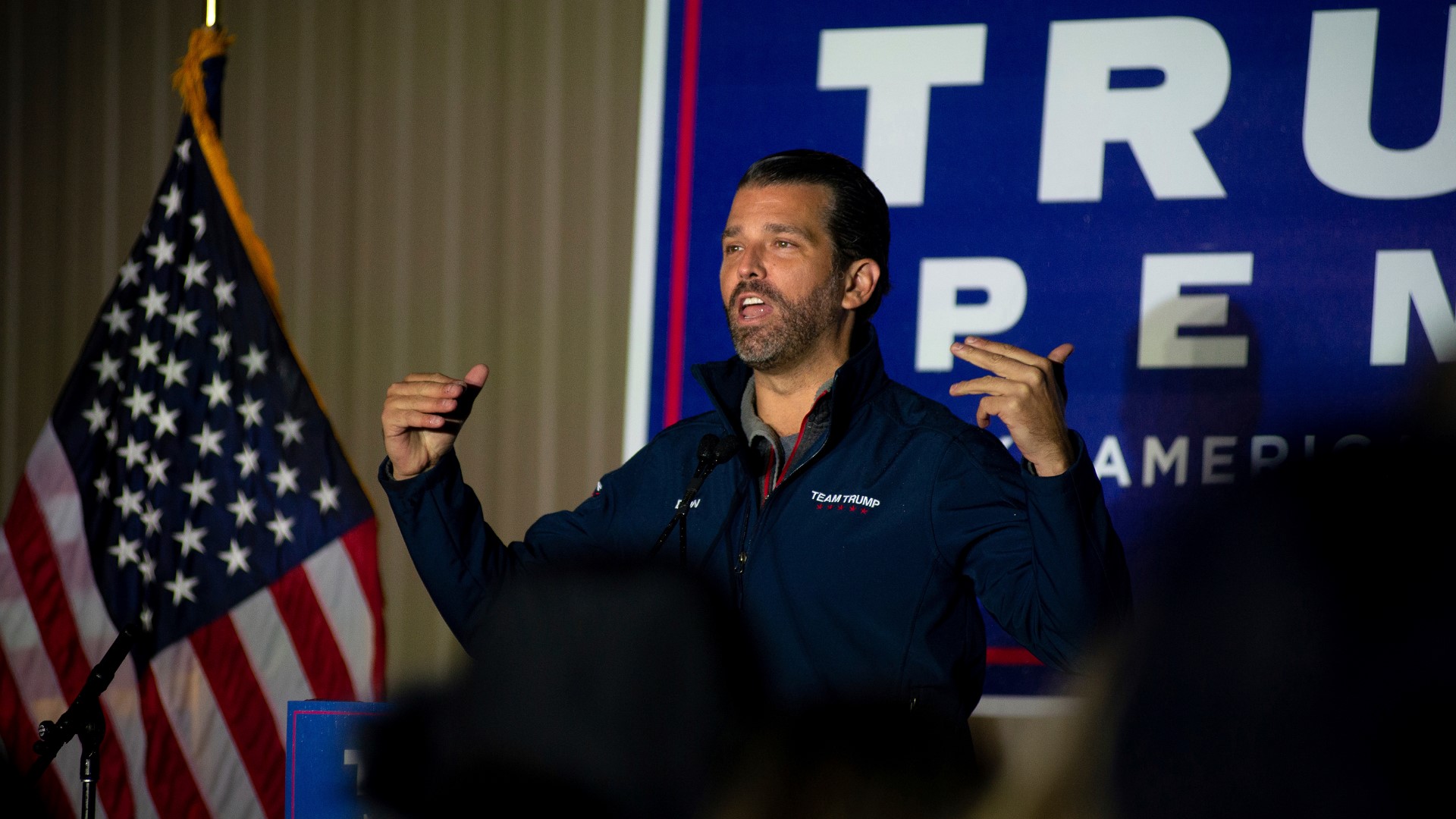 BANGOR, Maine — On the heels of his father's impromptu campaign stop in Levant this past weekend, Don Jr. hosted a "Make America Great Again!" event in Orrington on Thursday.

According to the campaign, Don Jr., President Donald Trump's eldest son, hosted an event at the DoubleTree by Hilton hotel in Manchester Thursday afternoon before heading to Orrington.

The Orrington event was scheduled for 5:30 p.m. Thursday at the Orrington Calvary Chapel. Campaign officials say Don Jr. was delayed due to rain, and took take the stage shortly before 6 p.m. instead.

“We should be very scared because our first amendment, our rights are on the table this November 3rd, we have to make sure people know what’s at stake...When you think about the things that Donald Trump has done, it’s unprecedented,” says Trump Junior in a one-on-one conversation with NEWS CENTER Maine after his remarks in Orrington.

Even though it’s raining, people are here more than an hour in advance to hear @DonaldJTrumpJr remarks tonight at 5:30 p.m. According to our @KeithCarson it’ll rain most of this evening. #NEWSCENTERmaine pic.twitter.com/lHwKeAeqzY

"You know, I think the people here get it. They see what democrat policies have done and what someone who is an outsider like Donald Trump can accomplish- who is willing to take on both sides and take on the establishment. I mean he took on big pharma, who's bought off every politician in DC, to lower consumer drug pricing. He created the strongest economy America has ever seen," Trump Jr said.

The event was originally planned for Greenway Equipment Sales in Hermon, but the venue was changed after the owners received a letter from Maine DHHS Commissioner Jeanne Lambew, who reiterated the state's coronavirus restrictions on gatherings and safety mandates. Lambrew told the owners if guidelines weren't followed, the state would take all reasonable and practicable actions to protect the health and safety of Maine people.

Maine has a statewide mask mandate in public spaces when social distancing is difficult to maintain, and an outdoor gathering limit of 100 people.

Campaign officials say 250 chairs are out for spectators. Everyone’s temperature was checked and masks are available. Trash bags are also being passed out for ponchos because it is still raining.

The business owners said after they got the letter, they consulted with the Trump campaign, who ultimately made the decision to move the event to another venue.

During Thursday's coronavirus briefing, Lambew said she and the Maine DHHS have been in touch with the new venue, Orrington Calvary Chapel, as well, to again share their guidance on public health and large gatherings.

"We expect them, for the sake of public health, to comply, but we don't yet want to speculate on what that event will entail," Lambrew said. "It is possible—and it has been proven here in Maine—that you can hold events, large gatherings safely."

The campaign set up around 250 distanced chairs for the crowd at the event, though NEWS CENTER Maine reporters covering the event observed crowds nearly double that size, very few wearing masks, and little social distancing in effect.

Attendees were reportedly temperature checked before they were allowed in and masks were handed out.

Trump's other son, Eric, also stumped for his father in Saco in September at the Camp Ellis Pier, where he touted the lobster industry and ridiculed former Vice President Joe Biden.

Maine has just four electoral votes, but both Trump and Biden are fighting for every vote possible. During his recent trip to Holden, Don Jr. expressed Maine, specifically the 2nd Congressional District, is important in the election because the state splits electoral college votes. Maine is one of only two states in the country that splits votes, rather than the "winner take all" practice the other 48 states adhere by.