Congressional Dist. 2 candidates: Who they are, what they stand for 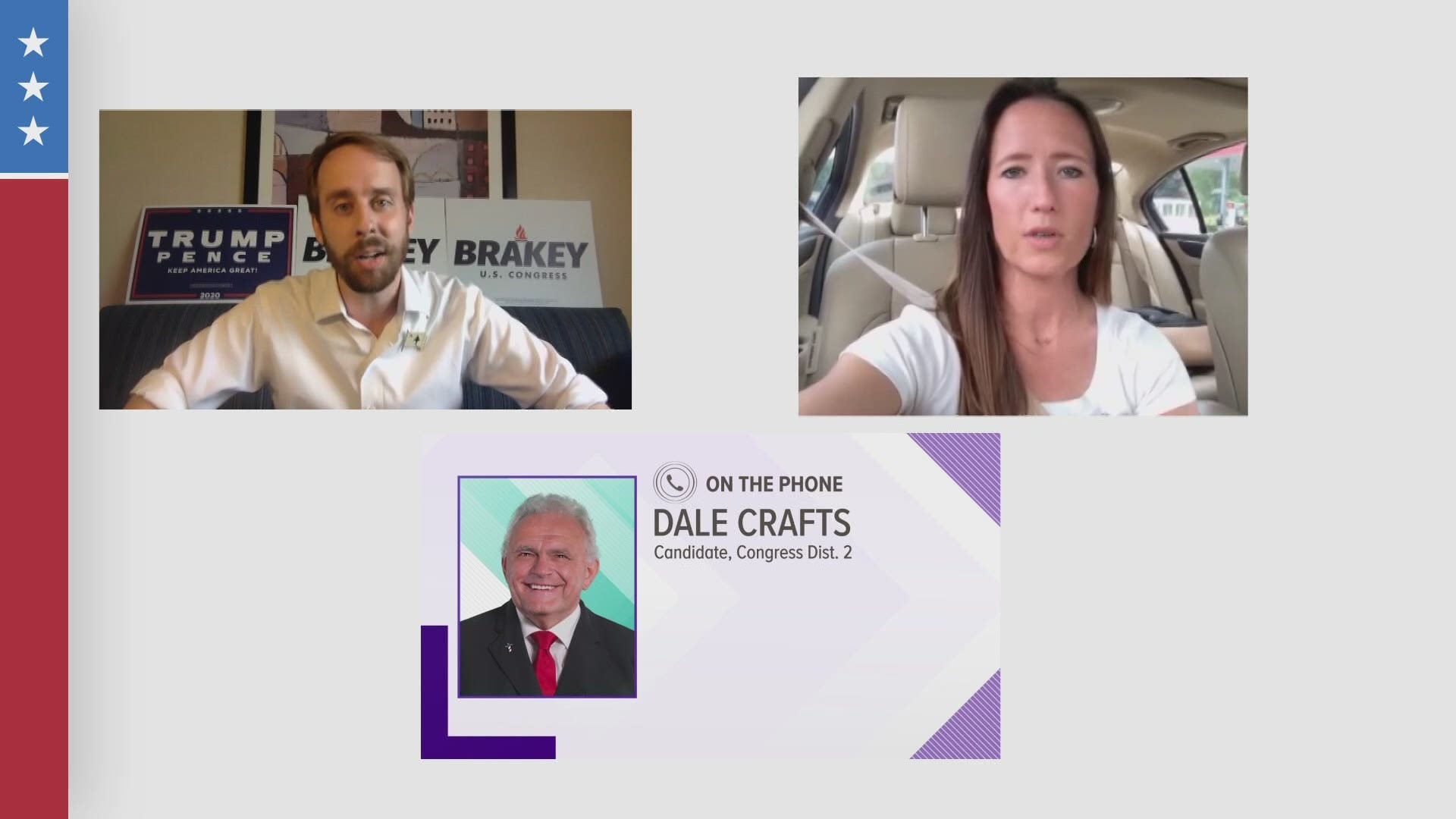 Adrienne Bennett, Eric Brakey, and Dale Crafts are all running on the Republican ballot in Maine's second district.

Each candidate (to follow alphabetically) supports the president and identifies as a strong conservative.

Adrienne Bennet of Bangor is a political newcomer. Bennet worked as Press Secretary for former Governor Paul LePage for many years.

Eric Brakey is a former state senator and currently lives in Auburn.

Dale Crafts of Lisbon is a former state representative. Crafts has the endorsement of former Governor Paul LePage.

NEWS CENTER Maine's Hannah Dineen interviewed each candidate individually ahead of the July 14 primary. She asked each of them the same following questions.

What makes you the best fit for this job?

Bennett: "I’m a Mainer and we know what that means: we’re tough, we have grit, we’re fighters and I’m a fighter. I have been my entire life and I’ve beaten the odds. I’ve been underestimated.

Brakey: "I am the proven freedom conservative who gets the job done. Over my two terms in the Maine Senate, I got the job done with gun rights and constitutional carry, I reformed welfare, prohibiting the purchases of alcohol, cigarettes and lottery tickets with our tax dollars, and got our health care freedom back with 'right to try'.

Crafts: "I have three things that former Governor Paul LePage said when he endorsed me and they're simple but they're true. I have the legislative experience which he knows, he witnessed; I have life experience and I have extensive business experience.

So I always challenge my opponents to put up their resume up on their website and compare. I ask the voters out there, look if you want to find out which candidate is the best, go to DaleCrafts.com and take a look at the testimonials, my life history, my work history."

Who are you and what do you stand for?

Bennett: "I’m a very strong conservative. I am pro-life, I am pro-Second Amendment, and I’m anti-China. We need to hold China accountable. We have a lot of work to do in Washington to stop the gridlock so I’m going to go to Washington and fight every step of the way to fight for Mainers.

If you want someone who is a true fiscal conservative who is ready to fight for our Constitutional freedoms then I'm your candidate."

Crafts: "I am a Republican; I’m a Christian; I totally believe in a moral compass. I believe this country was founded upon Judeo-Christian beliefs. I think our founders when they wrote the Constitution and the Bill of Rights were brilliant brilliant people and that's why our Constitution has lasted so long around the world and how America has changed the world to a free market.

Freedom is what it’s all about! People having the right to choose and be creative and go out and do things because no one is holding them back. We need less government and less government intrusion. We need to allow people to use their own imagination and creativity to prosper in life."

What can you bring to the table that the other two candidates can’t?

Bennett: "What has differentiated me from my two opponents is that I’m not a career politician and I’ve been underestimated my entire life. I was not born into business. I was born into welfare. I am the second district. My story is not remarkable compared to any other Mainer because we grew up very similarly.

I grew up from poverty, I came out of nothing, and I worked my way towards prosperity. I worked my way through college, I paid my own way, I had my daughter at 20-years-old, I worked three jobs. I worked also in an administration for seven years where I was the primary spokesperson for our most colorful and controversial governor so that's a background that sets me up for success in Washington."

Brakey: "In this race, I’m the proven candidate who gets the job done. I have a huge record of accomplishment during my time in Augusta passing constitutional carry, welfare reform, and 'right to try' when people thought it wasn't possible.

In a time of divided government, when Republicans and Democrats couldn't agree on anything, I managed thousands of grassroots people to hold the politicians accountable and get our freedoms back."

I really have the ability to persuade people to come-- in my opinion of course-- in the right direction. So I'm going to take my skills, hiring people, talking to people, talking to customers, building businesses, that I've been developing my entire life to Washington."