Collins and Gideon finally face off in first US Senate debate

Mainers got a chance to hear from Independents Max Linn and Lisa Savage as well as frontrunners Sara Gideon (D) and Susan Collins (R). 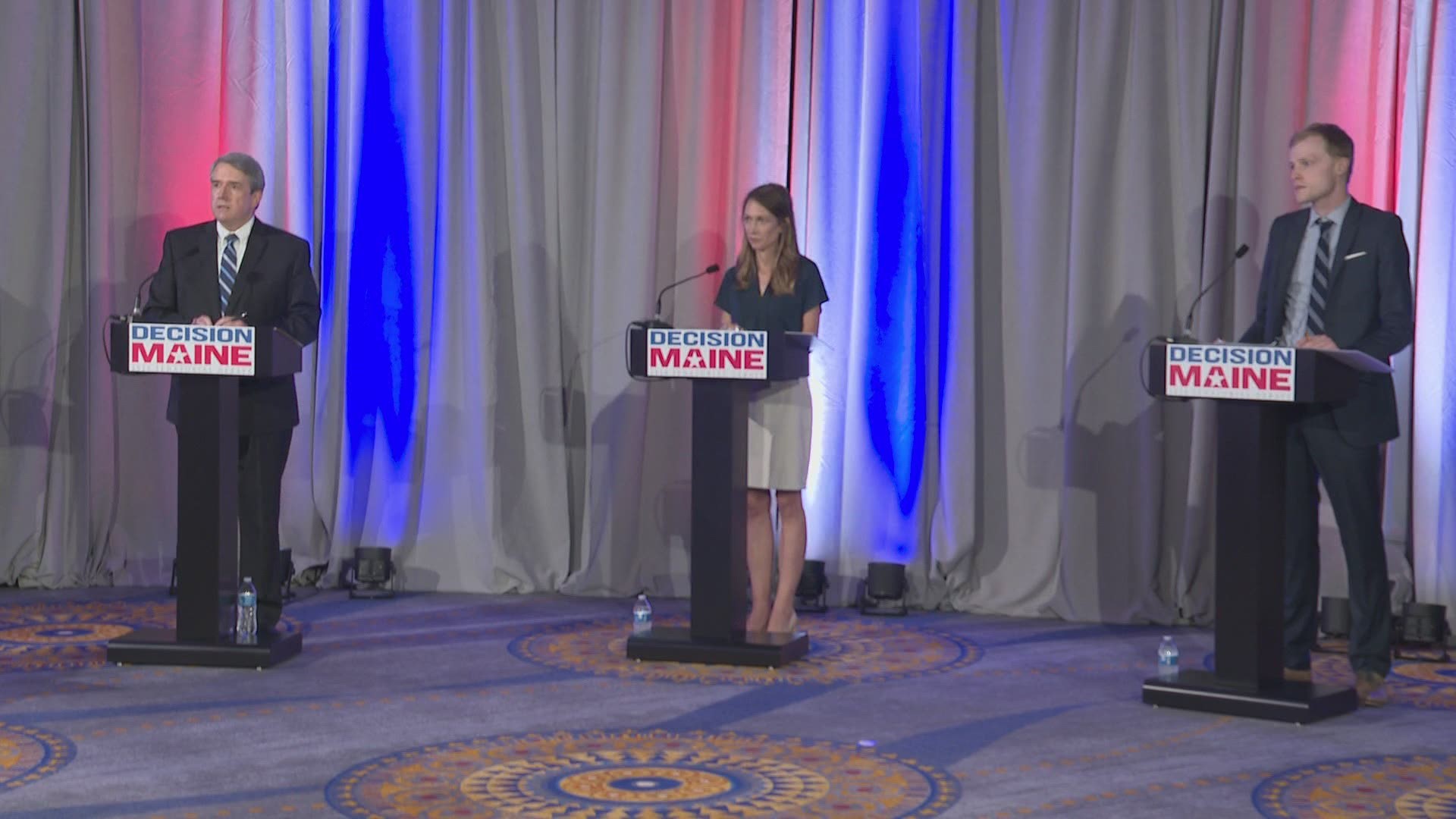 PORTLAND, Maine — The wait to see all four U.S. Senate candidates on the same stage ended Friday night as the candidates faced off in an in-person debate. The debate, which marked the first senatorial debate ahead of the election, was hosted by NEWS CENTER Maine, the Portland Press Herald, and the Bangor Daily News.

The race between frontrunners Republican incumbent Sen. Susan Collins and her Democratic opponent Sara Gideon has been heating up for months, becoming one of the most expensive races in Maine history and capturing national attention for the implications Collins' senate seat has on the Senate Majority. While it'll still be weeks until the race comes to a boil and voters decide who they want representing Maine in the Senate come November 3, Gideon and Collins were finally able to get some in-person jabs in.

The debate began with Collins, who was asked about recent reports of President Donald Trump downplaying the severity of the coronavirus to the American people back in February.

"I believe the president should have been straightforward with the American people," Collins said. "I have said since the beginning that he's been uneven."

Gideon and Collins were not alone on the debate stage Friday night, though. Independents Lisa Savage and Max Linn got their chance in the spotlight and used the platform to speak on a level playing field alongside heavyweight candidates Collins and Gideon. Linn made that a talking point, calling Collins and Gideon "giants" with millions of dollars in campaign funds.

Linn said he had to use his time to speak about issues he wanted to relay to voters because of the "millions" he's going up against, at times declining to answer questions from panelists.

The debate was moderated by NEWS CENTER Maine's Pat Callaghan and had panelists from the Portland Press Herald and Bangor Daily News—Rachel Ohm, education and politics reporter for the Press Herald, and Michael Shepherd, politics editor for the BDN.

As expected, a hot topic centered on Collins and her record supporting Justice Brett Kavanaugh and history with backing President Trump.

Despite being endorsed by the President, Collins has refused to publicly say whether she supports him in his bid for reelection. When pressed by Gideon about whether or not she supports Trump, Collins declined to take a position.

"I don't think the people of Maine need my advice on whom to support for president," Collins said, to which Gideon responded later in the debate, "It's not that Mainers need advice on who to vote for...They want to know who their Senator thinks should be leading us."

Still, Collins did not say whether or not she will vote in favor of four more years of Trump.

Later, Collins was pressed about voting in favor of the Supreme Court nominees of Trump and past presidents. Justice Brett Kanavaugh's name was raised, as he was a controversial conservative appointee for whom Collins voted in favor.

After Susan Collins faces a wave of criticism about her decision to confirm Justice Brett Cavanaugh to the Supreme Court, she turns to Sara Gideon and asks if she was have voted for Justice Roberts. “I would have had to fully study the situation,” Gideon responded. #DecisionMaine

Savage vouched for independent thought among appointees. She also said she does not believe judges should hold precedent on such a high pedestal that they are not willing to accept change.

The candidates were also asked about police brutality, as well as the concept of defunding the police.

"The brutal killings we've observed laid bare a legacy of racial injustice that we must address," Collins said. "I do want to say that the vast majority of law enforcement are honorable people who risk their lives every day for us."

Collins proposed enacting police reform legislation, saying she was disappointed that Sen. Tim Scott's bill was blocked in the Senate.

2020 Decision Maine: US Senate candidates share the debate stage for the first time ahead of the Nov. election

Collins also suggested more educational opportunities in order to "lift families of color out of poverty." She said we need to eliminate the health disparities in the treatment of communities of color.

Gideon countered by drawing attention to Trump's response to protests throughout the country, as well as to Collins' refusal to say who she'll vote for in the presidential election.

On police brutality and racial inequality, Savage said, "Yes I do think that we have a problem and we can partly address it through funding but we can also address it by holding police accountable when they execute people on the street."

Concerning campaign finance, Gideon, Linn, and Savage said that they would overturn Citizens United. However, Collins explicitly said she doesn't support a constitutional amendment to overturn that decision.

"Overturning Citizen's United would not do anything to ban dark money," Collins said.

"The candidates can just do what I've done," Savage said. "Don't accept corporate donations. Don't accept money from corporate lobbyists, corporate PACS, the PACS that launder corporate money. My campaign has raised about $120,000 over the course of a year, completely from grassroots supporters."

Collins then challenged Gideon on out-of-state money contributing to her campaign.

"Sara Gideon has set a record in the amount of dark money that has flooded the airwaves of this state. Seventy percent of the ads either attacking me or promoting Sara have come from out-of-state groups, primarily dark money," Collins said.

Linn said in order to come up with good healthcare policy, we must first take the money out of the hands of politicians like Collins and Gideon

.@SaraGideon goes back to Pres. Trump, says he is a threat to social security and Medicare. She is trying very hard to align @SenSusanCollins with @realDonaldTrump as much as possible tonight. #DecisionMaine

.@SenSusanCollins acknowledges that @SaraGideon has been critical of her decision to confirm Kavanaugh, asks if she would support Chief Justice Roberts. Gideon did not bite. #DecisionMaine

The Independents on the stage

Max Linn and Lisa Savage had noticeably different strategies as the debate began, with Linn opting to ignore the first two questions he was given in favor of bringing attention to the issues he has with the New England Clean Energy Connect project.

.@MaxLinn4Senate is focusing heavily on his fight against the CMP Corridor, says he’s filing a lawsuit CMP. #DecisionMaine

Savage, on the other hand, was composed and respectful throughout.

.@LisaForMaine is the only candidate on the debate stage who supports #MedicareForAll. #DecisionMaine