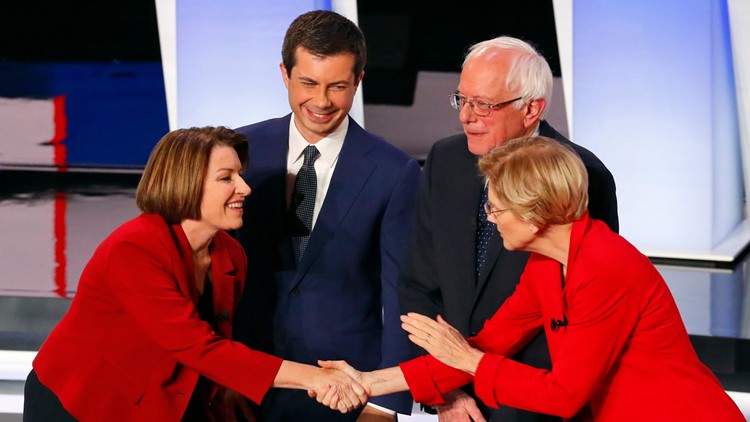 Candidates vie for Maine endorsements ahead of Super Tuesday

The Democratic presidential race is heating up, and the Maine primary is right around the corner. Here's how the candidates’ support with Mainers is going so far.
Author: Gabrielle Mannino (NEWS CENTER Maine)
Published: 12:05 PM EST February 21, 2020
Updated: 11:35 AM EST March 2, 2020

MAINE, USA — Super Tuesday is quickly approaching, and the Democratic presidential race is heating up—the debate in Las Vegas this week was proof of that. Candidates will fight to win primaries—and important delegates—in 15 jurisdictions, including Maine, on March 3. Endorsements from party and local leaders in the community are powerful showings of support and help influence how voters view candidates. Here’s how the candidates’ public support with Mainers is going so far.

RELATED: Final push for Democratic candidates in Maine ahead of Super Tuesday

The former South Bend, Ind. Mayor, who narrowly won the Iowa caucus—though Buttigieg and Bernie Sanders have requested a recount—and almost edged out Sanders in the New Hampshire primary, dropped out of the presidential race on Sunday, March 1. Before dropping out, he had picked up several Maine endorsements ahead of Super Tuesday.

RELATED: Where will Pete Buttigieg's voters go now that he's dropped out?

Maine State Reps. Andrew McLean and Tiffany Roberts announced they are backing Buttigieg for president. State Treasurer Henry Beck and State Rep. Lois Reckitt, who have also endorsed him, will serve as Maine co-chairs for the campaign. Beck and Rep. McLean will join the Buttigieg campaign at a canvass launch in Portland on Sunday at Rivalries Restaurant.

The Pete for America campaign released the following statement about the endorsements:

"Momentum is growing in Maine behind Pete's vision for the country with a groundswell of support from elected officials and hundreds of active grassroots volunteers across the state. Pete knows from his experience as Mayor of South Bend and serving our country overseas that there is another way forward besides burning down the system and the status quo. Mainers are ready for a president that actually brings the country together to tackle our greatest challenges on issues like bringing down health care costs and building an economy that actually works for all Americans."

RELATED: Warren slams Bloomberg for comments about women during debate

Bernie Sanders became the first candidate to qualify for the Maine primary. He is coming off a primary win in New Hampshire, a huge win in the Nevada caucuses wtih 46.8% of the vote, and holds a double-digit lead in national polls.

The former New York City Mayor Mike Bloomberg has been surging in national polls and continues to pour money into ads and staff increases across Super Tuesday states, including Maine. According to the Associated Press, the Bloomberg campaign has spent $409 million of his personal fortune so far in the race. Bloomberg recently opened a campaign office in Bangor, following office openings in Scarborough and Lewiston.

Bloomberg’s biggest Maine endorsement so far has been former Congressman Mike Michaud. Michaud is the former Assistant Secretary of Labor in the Obama Administration.

“In 2020, we need a candidate who can do one thing — beat Donald Trump. Mike Bloomberg is that candidate,” Michaud said in a statement.

RELATED: Bloomberg struggles to respond to politics of #MeToo era

Former Vice President Joe Biden’s strategy has been clear since a disappointing showing in Iowa. He left New Hampshire on the day of the primary to go to South Carolina. According to national polls, Biden has the most minority support among the candidates. Although Biden had dismal performances in Iowa (fourth with 15.8%), and New Hampshire (fifth with 8.4%), according to a recent NBC/WSJ poll he is second nationally with 15% of Democratic primary voters.

Biden came second behind Sanders in the Nevada caucuses with 20.4%.

Klobuchar visited Maine on Saturday, Feb. 29 for a 'grassroots event' which drew a crowd of about 500; her daughter Abigail has also visited Maine with campaign events in Westbrook and Kittery on Sunday, Feb. 23.

On Monday, Feb. 24, the campaign announced Maine State Rep. Michele Meyer endorsed Klobuchar. Meyer is a first-term Rep. for District 2, composed of Eliot and parts of Kittery and South Berwick. In a statement, Meyer said, “As a Maine State Legislator and a registered nurse, I support Senator Klobuchar because she is the best choice for communities like mine. She knows our problems and will fight for us. Amy has focused on lowering prescription drug prices more than any candidate in this field, and will address shortages in our health care workforce.”

The Bangor Daily News editorial board endorsed Klobuchar on Thursday, Feb. 27, citing her "realism, track record of hard work, and an understanding of rural America to the job."

RELATED: Warren stands up for Klobuchar as Buttigieg attacks her failure to name Mexican president

Hawaii Rep. Tulsi Gabbard has been holding town halls in Maine recently, drawing crowds. NEWS CENTER Maine has reached out to the campaign about endorsements and will update this story.

Billionaire Tom Steyer dropped out of the presidential race on Saturday, Feb. 29. He had not received any Maine endorsements.

RELATED: 'Miss me yet?' | Tom Steyer tweets his way through Vegas debate

This is a running list of endorsements and will be continually updated.