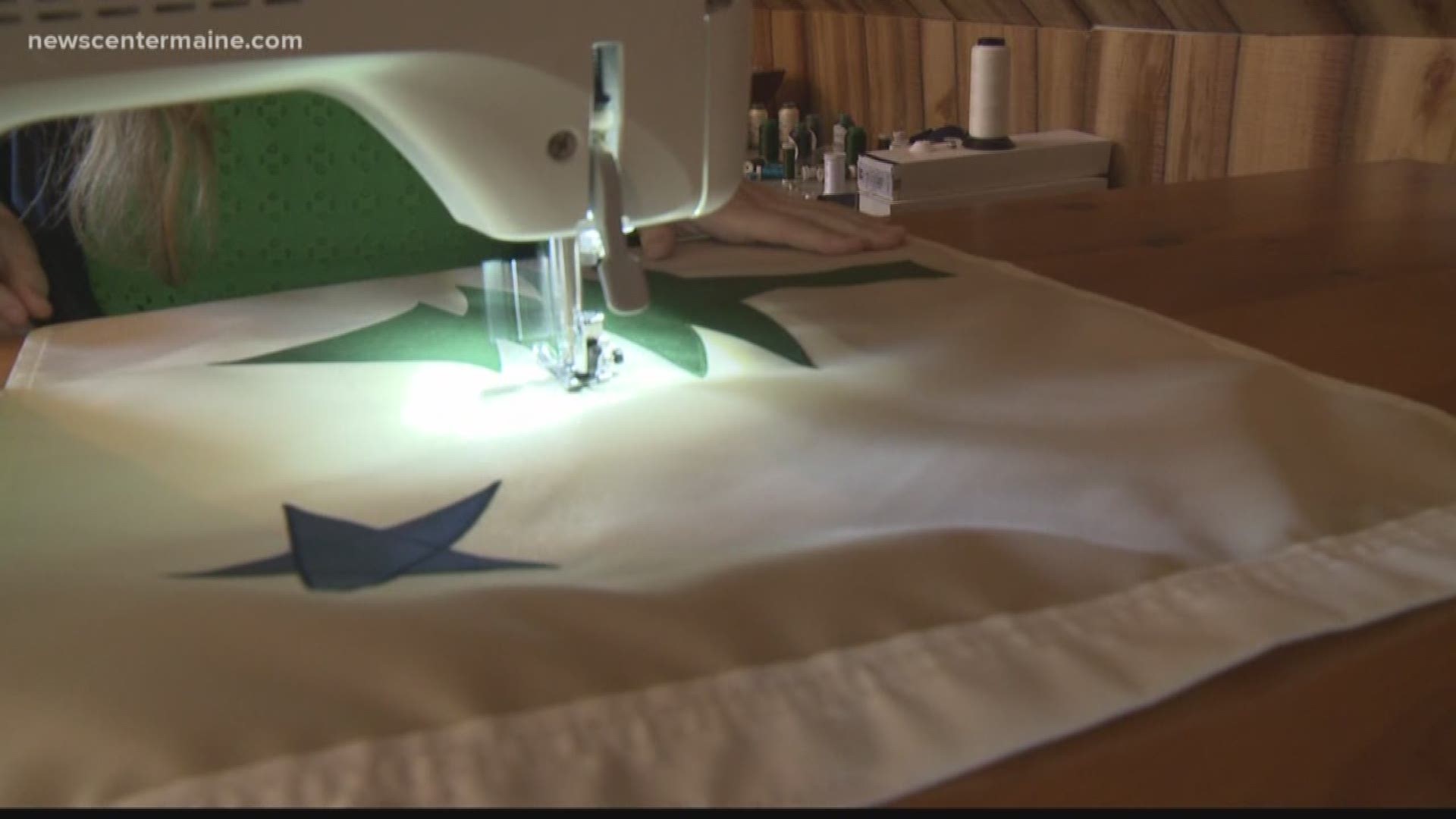 AUGUSTA, Maine — Maine's current state flag design was adopted more than a century ago in June 1909. Prior to that, for about a decade, it featured a more simpler makeup with two symbols – a tree and a star – on a buff background.

A Yarmouth lawmaker thinks the original should be restored and has proposed a bill in the Maine Legislature under which law regarding the current flag would be amended to reflect a description of its predecessor.

LD 687, "An Act To Restore the Former State of Maine Flag," was presented earlier this month by state Rep. Janice Cooper, D-Yarmouth. It suggests striking out most of §206 in Maine's general provisions statue containing its seal, motto, emblems and flags, which specifically defines the state flag.

The current statute: "… shall be of blue, of the same color as the blue field in the flag of the United States, and of the following dimensions and designs; to wit, the length or height of the staff to be 9 feet, including brass spearhead and ferrule; the fly of said flag to be 5 feet 6 inches, and to be 4 feet 4 inches on the staff; in the center of the flag there shall be embroidered in silk on both sides of the flag the coat of arms of the State, in proportionate size; the edges to be trimmed with knotted fringe of yellow silk, 2 1/2 inches wide; a cord, with tassels, to be attached to the staff at the spearhead, to be 8 feet 6 inches long and composed of white and blue silk strands."

Sen. Cooper's amendment: "… must be buff, charged with the emblem of the State, a pine tree proper, in the center, and the North Star, a mullet of 5 points, in blue in the upper corner; the star to be equidistant from the hoist and the upper border of the flag, the distance from the 2 borders to the center of the star being equal to about 1/4 of the hoist, this distance and the size of the star being proportionate to the size of the flag."

LD 687 was referred to committee on Feb. 7. No public hearings or worksessions were listed for the measure as of Feb. 18.

A fiscal impact statement voluntarily submitted to the State & Local Government Committee and approved on Feb. 15 showed "no fiscal impact."

Stay up to date on proceedings here.

Two months after Maine's March 1820 admittance into the United States, the legislature adopted language governing a seal design. Col. Isaac G. Reed of Waldoboro is credited by historians with its description and explanation:

"The seal of the State shall be a shield in silver, on it is a pine tree with a moose lying at the foot of it;  on the left side of the shield is a farmer resting on a scythe; on the right side, a seaman, resting on an anchor."

"In the foreground, representing sea and land, and under the shield, shall be the name of the State in large Roman capitals: MAINE

"The whole shall be surrounded by a crest, the North Star. The motto, in small Roman capitals, shall be in a label resting between the shield and the crest reading: DIRIGO  (I lead)."

The seal's appearance varied during its early years of existence.

An initial sketch showed a deer instead of a moose, a more conventional shield and the farmer's scythe pointing downwards rather than the blade being on top. Later forms included the scythe being held behind the farmer's head as well as the replacement of a sextant for the mariner's anchor — an "inexplicable substitution," according to the Secretary of State's Office.

According to CRW Flags Inc., a retail store in Maryland, Maine's very first representation of a flag was produced in 1822, two years after achieving statehood. The Maine Militia's hand- then lithographic-printed silk flags featured the shield of the Maine Arms, a white pine tree with a moose underneath and two ribbons above and below listing "DIRIGO" and "MAINE."

Nearly 80 years passed before a flag was officially established by the state legislature. Per CRW Flags, a bill was introduced on March 6, 1901, and called on the declaration of a state flag "to be blue, charged with the Arms of the State in the colors and as described in the Resolves of the State of Maine from 1820 to 1828, Volume I, Chapter IV."

"The State Flag is hereby declared to be buff charged with the emblem of the State, a pine tree proper in the center and the polar star (a mullet of five points), in blue in the upper corner. The star to be equidistant from the hoist and upper border of the flag, the distance from the two borders to the center of the star equal to about one quarter the hoist. This distance and the size of the star being proportionate to the size of the flag."

The flag only lasted until 1909. That's when Maine's current flag was adopted. A decade later in 1919, the Maine Legislature finally fixed the present seal.

RELATED: Running the original Maine flag up the pole

"A kid should be able to draw it from memory," Korzen said.

Side note: Maine is one of only two U.S. states — the other being Massachusetts — with an official merchant and marine flag. The flag, adopted in March 1939, features a green pine tree with a blue anchor entwined around its trunk on a white background with the motto "DIRIGO" placed above and the name "MAINE" below. The version is seldom seen; however, a flag reportedly hangs in the office of the president of Maine Maritime Academy.