Sanders will speak at 11:45 a.m. to address his supporters. 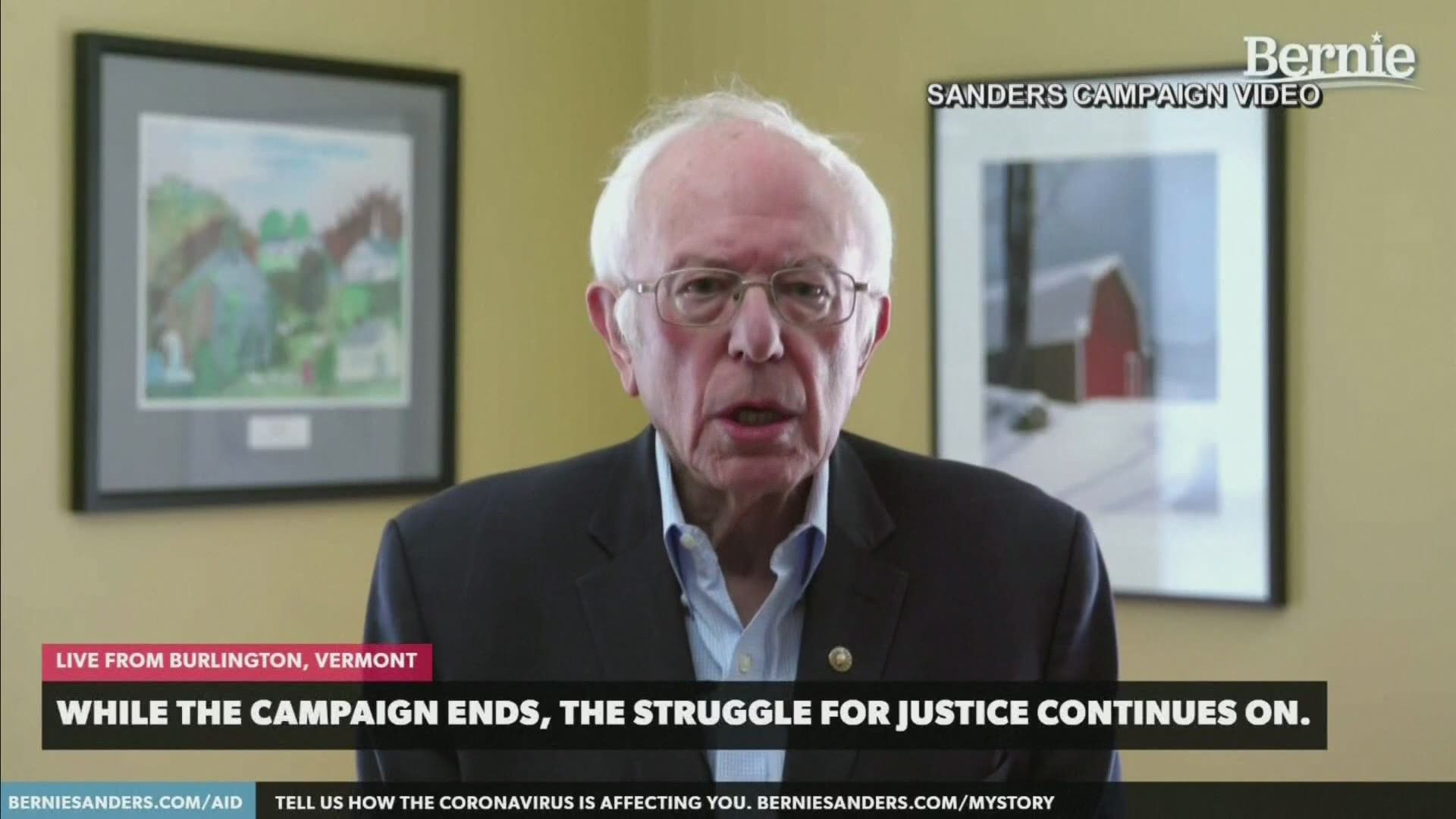 VERMONT, USA — Bernie Sanders is ending his presidential campaign, he announced on Wednesday.

The Vermont independent senator's 2020 bid started off strong. He narrowly missed first place in Iowa before picking up wins in New Hampshire and Nevada. All the while, his campaign continued to rake in millions in small-dollar donations and pack rallies full of supporters as he ascended to national front-runner status amid a crowded Democratic field.

Running as a progressive insurgent against Hillary Clinton in 2016, Sanders popularized ideas like "Medicare for All." In 2020, however, a number of candidates backed similar policies, and he faced another prominent progressive in Sen. Elizabeth Warren, D-Mass., who was the first to propose canceling some student debt in April.

Sanders followed with a more far-reaching plan of his own in June. Warren surged above Sanders in the fall, right up until he suffered a heart attack in October. That — along with the high-profile endorsement by Rep. Alexandria Ocasio-Cortez, D-N.Y., — revived his national polling numbers, and he remained in second place until Biden's dismal fourth-place showing in Iowa, which propelled Sanders to front-runner status.

In his 2020 bid, the senator worked to broaden his support with Latino voters, and his coalition grew more diverse because of it. But despite years of outreach to increase his popularity among black voters, Sanders failed to earn their votes in large numbers. He also lost some of his white working-class supporters to Biden, a fracture of his coalition that cost him crucial votes in states like Michigan.

Sanders also stumbled with women voters, facing accusations of sexism in January after tensions between his and Warren's campaigns spilled out into the open. The two progressives had largely remained allies while campaigning for the nomination, but a series of leaks to the media from aides and supporters of both senators accusing the other camp of dirty tricks and lying culminated in Warren saying in a statement that Sanders once told her he didn't think a woman could win the presidency.

Sanders denied the claim, but he was hit with further criticism of his supporters — dubbed the "Bernie Bros" — after female union leaders in Nevada who spoke out against his candidacy said they were attacked by his fans.

His campaign officially stalled in South Carolina. Fueled by a crucial endorsement from Rep. James Clyburn, D-S.C., Biden won the Palmetto State decisively. The moderate wing of the party then consolidated around him — Amy Klobuchar and Pete Buttigieg both dropped out of the race and endorsed him — and Biden won 10 of 14 states on Super Tuesday.