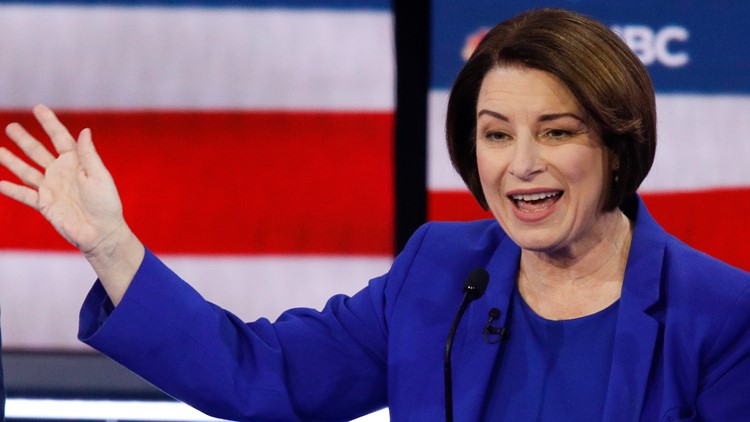 BANGOR, Maine — On Thursday the Bangor Daily News editorial board endorsed Minn. Sen. Amy Klobuchar for president. The editorial announcement says their decision is based on the "simple" assumption that the nominee should be a "bona fide member" of the party they represent.

“Sanders handily won the Maine Democratic caucuses in 2016, and it seems likely that he will win again,” the editorial reads. “But there are better, real Democratic choices in the party’s March 3 presidential primary. We believe the best choice is Minnesota Sen. Amy Klobuchar.”

Newspaper editorial boards operate independently from their newsrooms and in no way affect reporting or coverage.

In January, The New York Times editorial board announced a double endorsement for Klobuchar and Mass. Sen. Elizabeth Warren.

The Times’ announcement reads, “Of the more moderate candidates in the race, the board singles out Ms. Klobuchar, saying ‘the best chance to enact many progressive plans could be under a Klobuchar administration.’ The editorial board casts her as an experienced, successful lawmaker with the ability to unite the party, while praising her plans to tackle climate change, housing policy, infrastructure, health care and childhood poverty.”

On Monday the Amy for America campaign announced Maine State Rep. Michele Meyer endorsed Klobuchar. Meyer is a first-term Rep. for District 2, composed of Eliot and parts of Kittery and South Berwick.

RELATED: Candidates vie for Maine endorsements ahead of Super Tuesday

In a statement, Meyer said, “As a Maine State Legislator and a registered nurse, I support Senator Klobuchar because she is the best choice for communities like mine. She knows our problems and will fight for us. Amy has focused on lowering prescription drug prices more than any candidate in this field, and will address shortages in our health care workforce.”

Klobuchar herself has not visited Maine yet, but her daughter Abigail was in Westbrook and Kittery on Sunday for campaign events and has more campaign events planned in Maine ahead of Super Tuesday.

You can read about how the other candidates are doing with public endorsements from former and current Maine leaders here.

RELATED: Biden declares himself back in race after 2nd place Nevada finish