Collins has taken more than $1.6 million in campaign contributions from pharmaceutical and insurance industries via PACs. However, voting record in ad is misleading 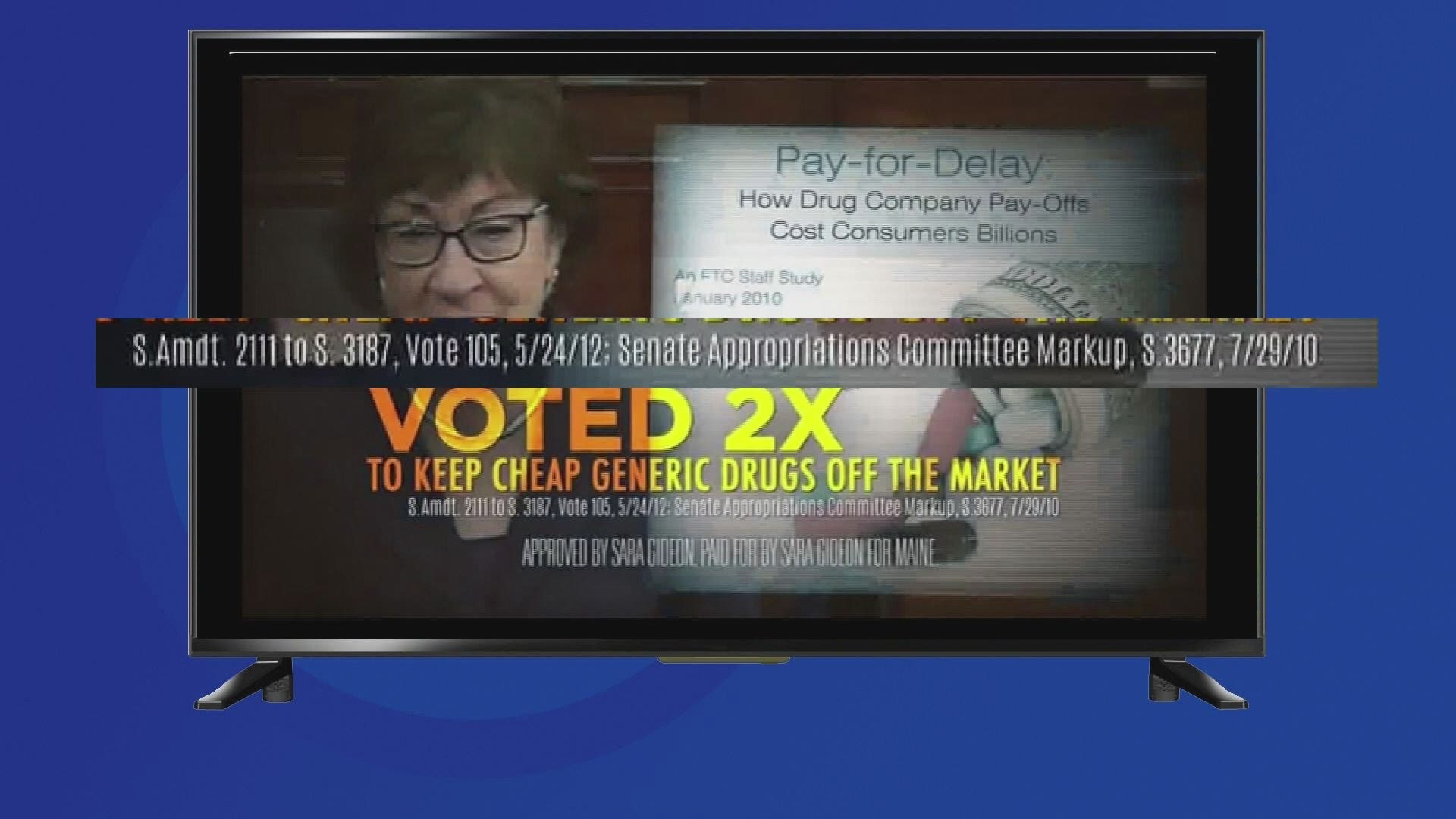 Collins: "Today, too many of our seniors who literally choosing between filling prescriptions and paying their bills."

Narrator: "But then Susan Collins took $1.5 million from drug and insurance companies. Collins voted twice to allow drug companies to keep cheaper generic drugs off the market, forcing Mainers to pay 10 times more for their medicine. Susan Collins, she's not for you."

There are two central claims made in this ad. First, that Susan Collins has taken $1.5 million dollars from drug and insurance companies.

NEWS CENTER Maine found this statement is mostly true. It's the exact language that makes it a bit murky. That's because it is illegal for corporations to donate directly to federal campaigns, which is what the ad technically claims.

However, Collins has received money from those industries through corporate PAC and individual contributions.

According to the Center for Responsive Politics, in her entire career as a Senator, Susan Collins was given more than $440,000 from the pharmaceutical sector and more than $1.17 million from the insurance sector.

In total, that is more than $1.6 million from the pharmaceutical and insurance sectors.

For context, in her career as a Senator, Susan Collins has raised more than $36.4 million. That means contributions from the pharmaceutical and insurance sectors have made up about 4.4 percent of her fundraising pie.

Shown on the ad is a report about 'Pay for Delay.' That is when brand-name pharmaceutical companies pay generic competitors to hold competing products off the market, allowing them to keep prices high.

The implication is that Susan Collins' voting record has contributed to a lack of generic drugs on the market. Brand name drugs typically being around 10 times more expensive.

The Gideon campaign references two specific votes. The first is a 2012 vote in which Collins was one of 67 Senators, including 25 Democrats, that opposed an amendment to minimize 'pay for delay' agreements.

The second is a 2010 vote in which she was in favor of the Senate Appropriations Committee removing a provision from a bill that would prohibit 'pay-for-delay' schemes.

In both cases, the Collins Campaign stands by those votes, saying in 2012, it came down to many Senators believing it would actually have an opposite effect. And in 2010, campaign spokesperson Kevin Kelley says it came down a debate about "authorizing on an appropriations" bill.

Kelley says if you look at Susan Collins' full record, you'll find "she has actually been working tirelessly to bring down prescription drug prices."

In conclusion, Susan Collins' has received more than $1.5 million in campaign contributions from the pharmaceutical and insurance sectors through PAC and individual contributions.

As for the other key claim, the two votes highlighted in the Gideon attack ad are far from a full representation of Collins' record on the issue of lowering prescription drug prices.

Sara Gideon campaign spokesperson Maeve Coyle says, "After 24 years in Washington, Senator Collins has changed. Her close ties to the special interests are hurting Mainers. She's taken more than $1.5 million from big drug and insurance companies, and time and again voted their way, including voting against measures to end the harmful pay-for-delay practice that forces Mainers to pay more for prescription drugs."